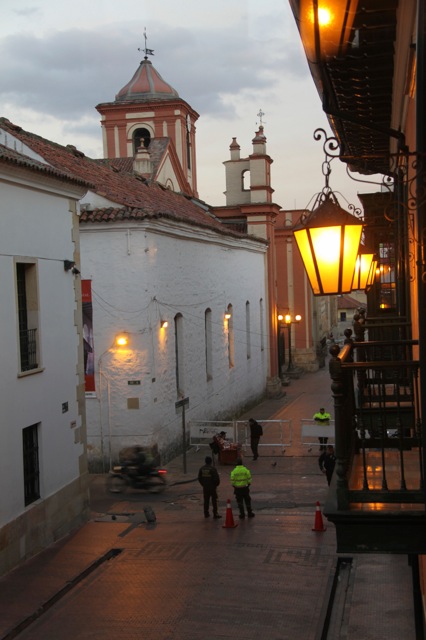 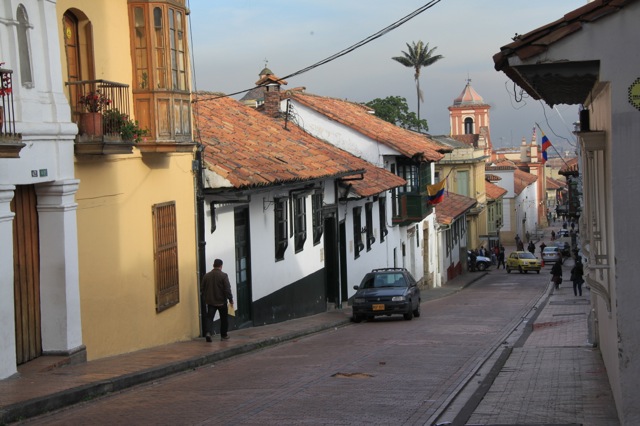 But venturing out we have a quick conversation with one of the cheery soldiers on point duty who reveals nothing alarming in the sudden show of force. Instead, it’s a formal event in honour of the out-going police chief. Medals are being handed out. Crowds are enjoying the spectacle. It’s a new day. The events of the past still cast long shadows over modern-day Colombia; but they are fading fast. Today, the spotlight is firmly on the country’s richly varied and beautiful environment, its complex and fascinating history and warm and welcoming population.

Colombia is one of the most physically diverse countries in the world, with a glorious 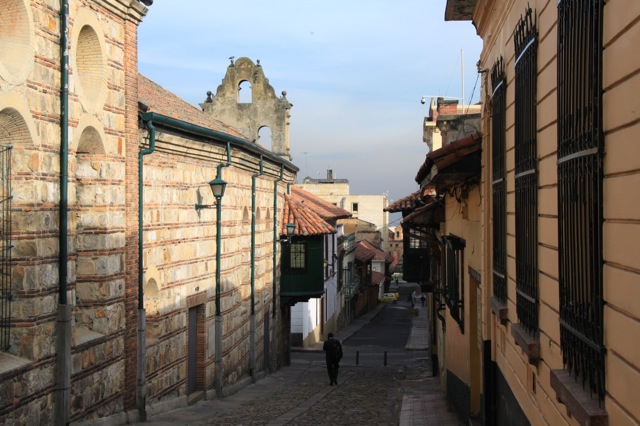 , mountainous Andes region, pristine Amazon rainforest, rich coffee-growing highlands, tropical grasslands, multi-coloured desert and both Caribbean and Pacific coastlines. Here, you can see ancient petroglyphs and wander through sites belonging to some of the earliest indigenous inhabitants. Our first stop is the capital, Bogota, which sits on a high plateau  on the Andes which offer spectacular views of the glowering mountains from pretty much everywhere across the city.

More so perhaps than many other capital cities, Bogota seems a city in two distinct parts, young and 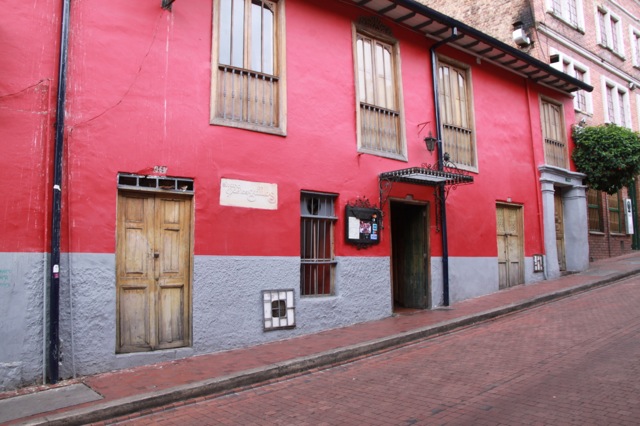 old. La Candelaria is the quaint historical part of the city,  a network of narrow, often steep streets (why is it there always seem to be more streets to walk up, than down?) that has a friendly neighbourhood feel. The houses are a riot of pastel colours, some have flower-filled wrought-iron window boxes, others shutters or filigree iron balconies. Many of the heavy wood doors are decorated with large ornate metal door knockers – snarling lions, giant lizards and fanciful fish. From the outside the houses look small but when you step through the wooden doors you usually find yourself in a light-filled open-air quadrangle, often with a fountain, lush 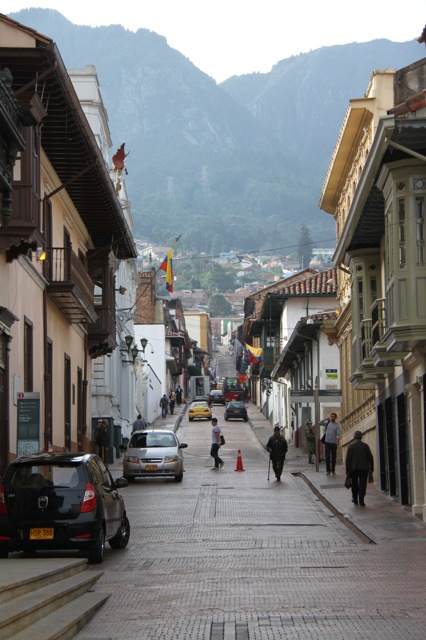 garden and benches, the living quarters wrapped around. There’s a flurry of building currently going on and while many of the houses are still obviously private homes others are being converted into restaurants and boutique hotels. Galleries are springing up or expanding.

When the celebrations are over, the crowds and the guards gone, we can wander through the Plaza de Bolivar which is the heart of the old quarter. It is also where many of the grand official buildings are located, like the Palace of Justice which includes the Supreme Court, the Lievano, a surprisingly modern looking French-designed building, housing the Mayor’s Office, and the imposing Primary Cathedral of Bogota. Along  the entire south side of the 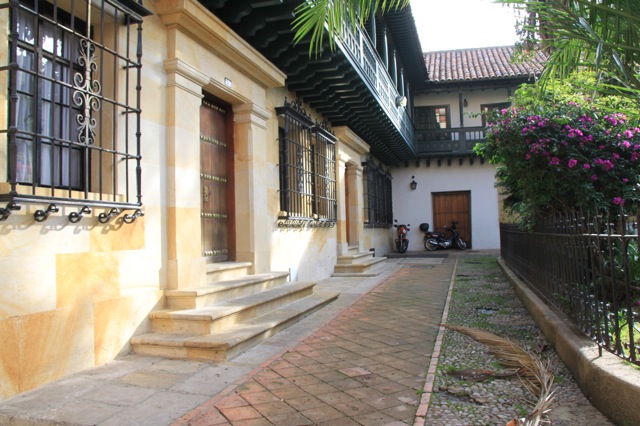 plaza is the National Capitol and both houses of Congress. In pride of place, in the centre of the square, is a giant bronze statue of Simon Bolivar, El Liberator.

It’s a steep, lung-testing climb up the road from the Plaza to the charming Plaza Chorro de Quevedo.  It is acknowledged as being the birthplace of modern Bogota following the formal declaration by the Spanish in 1538. There’s even a plaque. Although only a few of the original houses and the small pretty chapel survive, it’s a 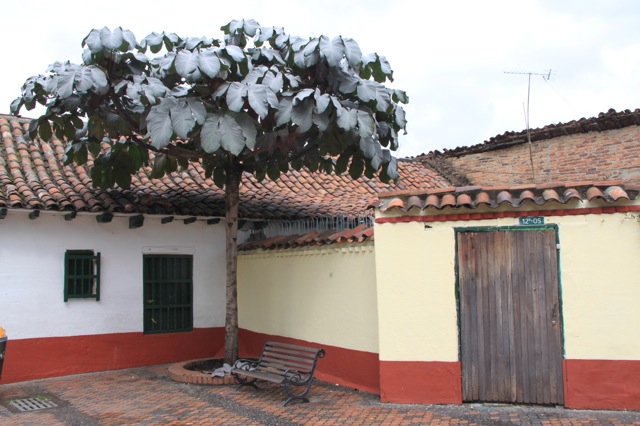 bustling fun place, popular with students. In the corner is one of the beautiful cecropia trees, its foliage so perfect it looks like it was forged out of silver metal. And we met mother and daughter Marina and Carmen, members of the indigenous Muisca indians, who have been coming to the Plaza to sell pepper and aromatic herbs for more than 30 years.

The Plaza is also is the entry point to one of the city’s “graffiti streets”. If you are used to the crude daubings that infect our major cities you are in for a happy surprise. 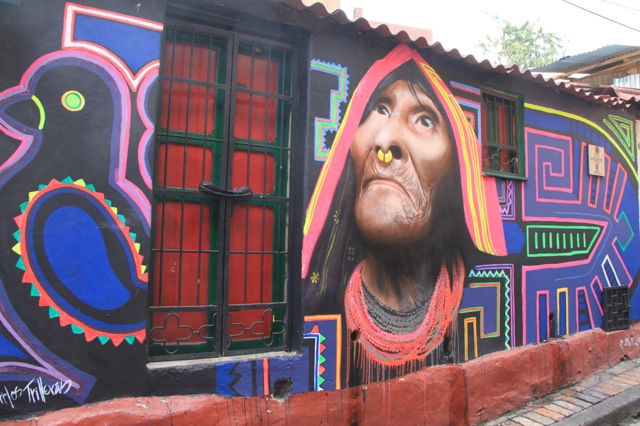 These are skilled and imaginative works of creativity, officially sanctioned and you can take a guided tours if you are interested in getting a better understanding of the different genres and art collectives responsible for the works.  It’s a really fun place to just wander around and there are plenty of cafes (some little more than a hole in the wall pop-up) plus a tattoo parlour for that permanent reminder of your visit. Keep your eyes peeled and see how many of the mysterious green people you can see 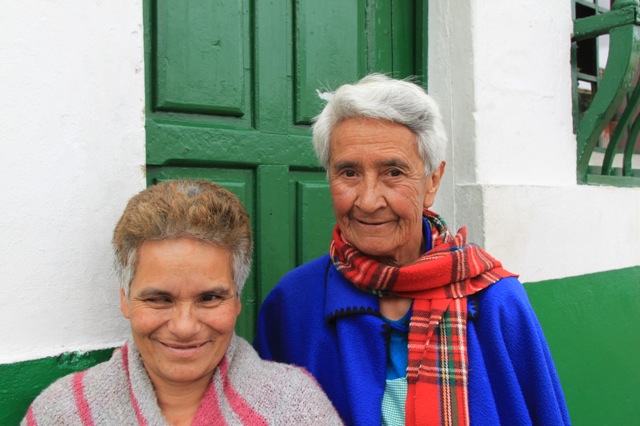 around Candelaria. There’s no prize, but you will get a different perspective on some of the beautiful buildings. 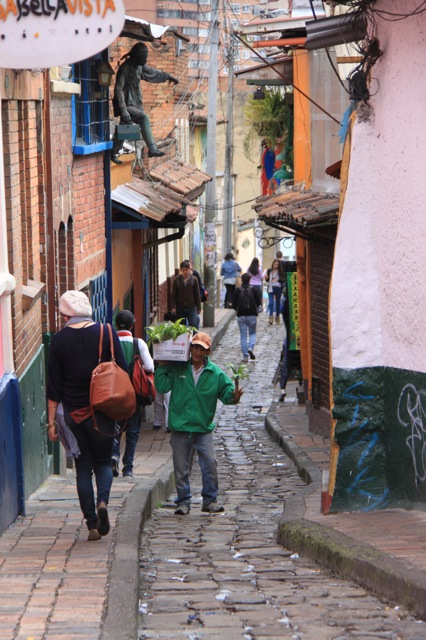 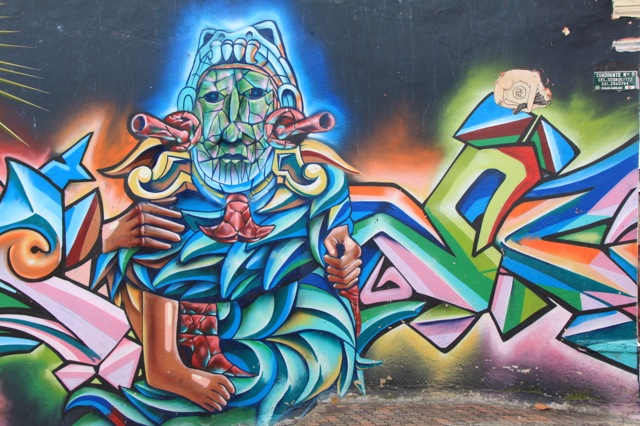 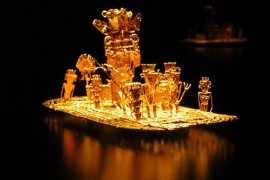