German writer and director Jenny Erpenbeck has won the Independent Foreign Fiction Prize for her book The End of Days described by judge Boyd Tonkin  as ” a novel to enjoy, to cherish, and to revisit many times. Into its brief span Jenny Erpenbeck packs a century of upheaval, always rooted in the chances and choices of one woman’s life. It is both written and translated with an almost uncanny beauty, which grows not out of historical abstractions but from the shocks and hopes of everyday life, and from our common quest for peace, home and love. Re-reading this jewel of a book, I came to feel as if both W. G. Sebald and Virginia Woolf would recognise a kindred spirit here.” The GBP10,000 is shared with translator Susan Bernofsky

The shortlisted novels for the prize, administered by the Book Trust were: By Night the Mountain Burns by Juan Tomás Ávila Laurel from Equatorial Guinea, Colorless Tsukuru Tazaki and His Years of Pilgrimage by Japan’s Haruki Murakami,  F by fellow German Daniel Kehlmann, In the Beginning Was the Sea by Colombian Tomás González, and While the Gods Were Sleeping by Belgium’s Erwin Mortier. 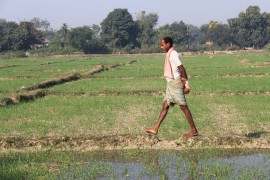