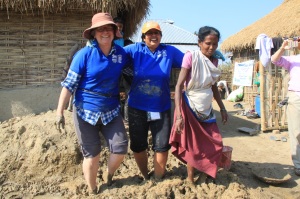 We are now beginning to get the hang of things. Our first attempts at shaving the bamboo strips that would be woven into neat and functional walls were awkward and uneven. Then an elderly man, clearly a local craftsman who had arrived to work on the partitions, unceremoniously took us aside and showed us how it should be done. Not only was the result ten times neater, it was ten times easier. It’s simple (well, simpler) when an expert shows you know how it should be done.

We were still the focus of rapt attention. Locals seemed to be queuing up to watch as we

worked. The children were inquisitive but initially shy, watching from afar. However they were the first to join in, working alongside us as we formed human chains to move sand, aggregate, cement or anything else that was needed.

The fact that a number of the men simply stood by and watched irked both males and females on the Habitat for Humanity team. Many men could be seen laboring in the fields; hard, exhausting, backbreaking work. Others were working incredibly hard on the house build. But others didn’t seem bothered by the fact that they stood around doing very little whatever the workload their wives or mothers coped

with. As if being poor were not a harsh-enough reality in itself, women are not high up on the pecking order in much of Nepal.

One of the main thrusts of the Habitat for Humanity Australia program, run in conjunction with local partners Forward, is to assist those tens of households headed by a single woman, often the poorest of the poor. Most have a daily income averaging less than a few dollars. They are vulnerable to exploitation and economic or even physical bullying. And for a country that has one of the lowest GDPs they are a ridiculously under-utilized resource. These women are hardworking, resolute and tenacious. A formidable asset. 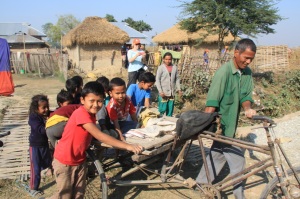 Slowly, we are becoming part of the community. Albeit, still a novelty. When we render the walls (a pleasant and rather satisfying experience) a local woman will appear at our elbows and show us the right technique (throw on a large piece and then smooch it upwards filling in the cracks as you go). Occasionally we break to form the chain gang moving whatever is needed. What had been a bare shell is now beginning to look like a real building.

At the end of each day we board the bus for the return trip feeling a little stiff, and

satisfyingly tired. The waning sun casts a magical light over the beautiful countryside as we travel through the villages. People are heading home. A lucky few on motorcycles. Many on bikes. But many, men, women and children, also walking what is undoubtedly a journey of several kilometers. A long journey they make every day.

The livestock have been brought back to the security of the family home and have been fed, watered and bedded down. The more valuable or vulnerable ones have been covered with grain sacks or old blankets. The air is heavy with the smell of wood smoke from tens of thousands of meals are cooked over open fires. All of us are silent as we bump and crunch our way home. These days are adding up to a unique and overwhelming experience. 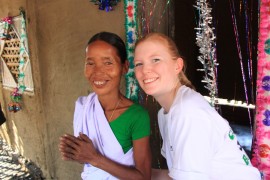