In what has been a bit of a late flurry of literary bliss in the last week or so I’ve read three terrific books all captivating and intriguing in their own wonderful way.

A Winter Book by Tove Jansson: this collection of short stories by the

Finnish creator of the Moomin books, was an unexpected delight. Its publication follows the stunning success of the earlier The Summer Book and again gathers together some of Jansson’s best known and loved short stories. It’s about physical remoteness, the sea and island living, friendship and growing old. There are many treasurers but I think my favourite is The Squirrel. This is a book to be read and re-read.

A Winter Book, introduced by Ali Smith, is published by A Sort of Book

Can’t and Won’t by Lydia Davis: I confess that I wasn’t really aware of acclaimed author Lydia Davis until she unexpectedly won the 2013 International Man Booker prize. She is master of effective brevity. Alongside what might be described as conventional short stories (like the moving The Seals) there are the acidly sharp letters of complaint, a collection of punchy paragraph recollections of dreams featuring a disturbing obsession with travel. It’s like having a wonderfully observant friend, wise, witty and wicked, who keeps nudging you in the ribs and saying “look at that” as you zip through life.

Can’t and Won’t is published by Hamish Hamilton.

The Golden Age by Joan London: This has been on my must-read list for some time but kept being elbowed out by new arrivals.  Set in 1954, in a Perth hospital for children suffering from polio it is the story of Frank, a refugee from war-torn Europe, who finds life in poetry and love in a fellow patient. This beautifully written book is a poignant and perceptive portrayal of what it is like to be an outsider, from family and country.

The Golden Age is published by Random House Australia 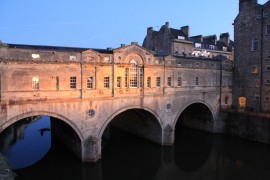 Historic Bath: always the epitome of elegance
The best books of 2014
Navigate
Follow