There was some unusual feedback from American novelist Phillipp Meyer, (pictured left) author of the knock-out The Son, who is star attraction at the Brisbane Writers’ Festival this week.“Praise is just as bad as criticism when you’re doing work,” he said in an interview with The Australian newspaper. “You can’t have anyone else’s voice in your head but your own, so the way I deal with it is I just don’t think about it,” he said. “When I see those sort of comments they have no emotional effect. It’s like a pretty girl getting your attention at a bar. If you did actually think about it, artistically you’d be ruined, you’d turn into a monster.”

He’d better get used to ignoring a lot of pretty girls in bars as the plaudits are flooding in for The Son (an extract from which appears below). It’s a grim, violent, ultra realistic saga about how the American west was won or lost, depending on your perspective, told through three generations of a pioneering family. Read on for an extract from The Son.

Indigenous work was well-represented in the  Queensland Literary Awards which were announced at the Festival. The winners are: Fiction: Melissa Lucashenko, Mullumbimby; History: Jane Lydon for The Flash of Recognition: Photography and the Emergence of Indigenous Rights; Non-fiction: Kristina Olsson for her memoir Boy, Lost; Short story: Cate Kennedy for Like a House on Fire; Poetry: John Kinsella, Jam Tree Gully; Children’s: Narelle Oliver’s Don’t Let a Spoonbill in the Kitchen! (still one of my favourite book titles); Young Adult:  Jaclyn Moriarty’s A Corner of White; People’s Choice: Kate Morton for The Secret Keeper.

Extract from The Son by Philipp Meyer

It was prophesied I would live to see one hundred and having achieved that age I see no reason to doubt it. I am not dying a Christian though my scalp is intact and if there is an eternal hunting ground, that is where I am headed. That or the river Styx. My opinion at this moment is my life has been far too short: the good I could do if given another year on my feet. Instead I am strapped to this bed, fouling myself like an infant.

Should the Creator see fit to give me strength I will make my way to the waters that run through the pasture. The Nueces River at its eastern bend. I have always preferred the Devil’s. In my dreams I have reached it three times and it is known that Alexander the Great, on his last night of mortal life, crawled from his palace and tried to slip into the Euphrates, knowing that if his body disappeared, his people would assume he had ascended to heaven as a god. His wife stopped him at the water’s edge. She dragged him home to die mortal. And people ask why I did not remarry.

Should my son appear, I would prefer not to suffer his smile of victory. Seed of my destruction. I know what he did and I suspect he has long graced the banks of the river Jordan, as Quanah Parker, last chief of the Comanches, gave the boy scant chance to reach fifty. In return for this information I gave to Quanah and his warriors a young bull buffalo, a prime animal to be slain the old way with lances, on my pastures that had once been their hunting grounds. One of Quanah’s companions was a venerable Arapahoe chief and as we sat partaking of the bull’s warm liver in the ancient manner, dipped in the animal’s own bile, he gave me a silver band he had personally removed from the finger of George Armstrong Custer. The ring is marked “7th Cav.” It bears a deep scar from a lance, and, having no suitable heir, I will take it to the river with me.

Most will be familiar with the date of my birth. The Declaration of Independence that bore the Republic of Texas out of Mexican tyranny was ratified March 2, 1836, in a humble shack at the edge of the Brazos. Half the signatories were malarial; the other half had come to Texas to escape a hangman’s noose. I was the first male child of this new republic.

The Spanish had been in Texas hundreds of years but nothing had come of it. Since Columbus they had been conquering all the natives that stood in their way and while I have never met an Aztec, they must have been a pack of mincing choirboys. The Lipan Apaches stopped the old conquistadores in their tracks. Then came the Comanche. The earth had seen nothing like them since the Mongols; they drove the Apaches into the sea, destroyed the Spanish Army, turned Mexico into a slave market. I once saw Comanches herding villagers along the Pecos, hundreds at a time, no different from the way you’d drive cattle.

Having been trounced by the aboriginals, the Mexican government devised a desperate  lan to settle Texas. Any man, of any nation, willing to move west of the Sabine River would receive four thousand acres of free land. The fine print was written in blood. The Comanche philosophy toward outsiders was nearly papal in its thoroughness: torture and kill the men, rape and kill the women, take the children for slaves or adoption. Few from the ancient countries of Europe took the Mexicans up on their offer. In fact, no one came at all. Except the Americans. They flooded in. They had women and children to spare and to him that overcometh, I giveth to eat of the tree of life.

Don’t be put off by its brevity, Jenny Offill’s Weather packs a mighty literary punch 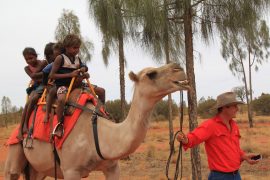