I fling open my bedroom curtains, and there’s the thirsty sky and the wide river full of ships and boats and stuff, but I’m already thinking of Vinny’s chocolatey eyes, shampoo down Vinny’s back, beads of sweat on Vinny’s shoulders, and Vinny’s sly laugh, and by now my heart’s going mental and, God, I wish I was waking up at Vinny’s place in Peacock Street and not in my own stupid bedroom. Last night, the words just said themselves, ‘Christ, I really love you, Vin,’ and Vinny puffed out a cloud of smoke and did this Prince Charles voice, ‘One must say, one’s frightfully partial to spending time with you too, Holly Sykes,’ and I nearly weed myself laughing, though I was a bit narked he didn’t say, ‘I love you too,’ back. If I’m honest. Still, boyfriends act goofy to hide stuff, any magazine’ll tell you. Wish I could phone him right now. Wish they’d invent phones you can speak to anyone anywhere anytime on. He’ll be riding his Norton to work in Rochester right now, in his leather jacket with LED ZEP spelt out in silver studs. Come September, when I turn sixteen, he’ll take me out on his Norton.

Someone slams a cupboard door, below.

Mam. No one else’d dare slam a door like that.

No. We’ve been too careful, me and Vinny.

She’s menopausal, is Mam. That’ll be it.

Down in the kitchen, the atmosphere’s like Antarctica. ‘Morning,’ I say, but only Jacko looks up from the window-seat where he’s drawing.

Talking Heads’ Fear of Music is on my record player, so I lower the stylus. Vinny bought me this LP, the second Saturday we met at Magic Bus Records. It’s an amazing record. I like ‘Heaven’ and ‘Memories Can’t Wait’ but there’s not a weak track on it. Vinny’s been to New York and actually saw Talking Heads, live. His mate Dan was on security and got Vinny backstage after the gig, and he hung out with David Byrne and the band. If he goes back next year, he’s taking me. I get dressed, finding each love bite and wishing I could go to Vinny’s tonight, but he’s meeting a bunch of mates in Dover. Men hate it when women act jealous, so I pretend not to be. My best friend Stella’s gone to London to hunt for second-hand clothes at Camden Market. Mam says I’m still too young to go to London without an adult so Stella took Ali Jessop instead. My biggest thrill today’ll be hoovering the bar to earn my three pounds pocket money. Whoopy-doo. Then I’ve got next week’s exams to revise for. But for two pins I’d hand in blank papers and tell school where to shove Pythagoras triangles and Lord of the Flies and their life cycles of worms. I might, too.

Down in the kitchen, the atmosphere’s like Antarctica. ‘Morning,’ I say, but only Jacko looks up from the window-seat where he’s drawing. Sharon’s through in the lounge part, watching a cartoon. Dad’s downstairs in the hallway, talking with the delivery guy – the truck from the brewery’s grumbling away in front of the pub. Mam’s chopping cooking apples into cubes, giving me the silent treatment. I’m supposed to say, ‘What’s wrong, Mam, what have I done?’ but sod that for a game of soldiers. Obviously she noticed I was back late last night, but I’ll let her raise the topic. I pour some milk over my Weetabix and take it to the table. Mam clangs the lid onto the pan and comes over. ‘Right. What have you got to say for yourself?’ 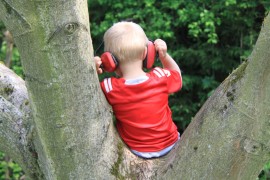