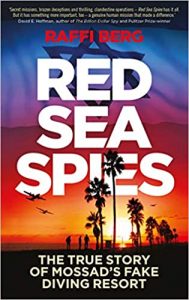 One of my New Year’s resolutions for 2020 was to read more non-fiction books. It wasn’t that I have ever made a conscious decision to avoid them, there was just too much temptation from the world of fiction. Red Sea Spies by Raffi Berg is a brilliant example of what I have been missing out on. It has the sub-title of The True Story of Mossad’s Fake Diving Resort, linking it to the Netflix movie that was based on the book. And as intriguing as that sounds, the book is so much.

The book, written by Raffi Berg, the Middle East Editor of the BBC’s website, is the story of Israel’s clandestine plan to assist the Jews of Ethiopia, historically known as Beta Israel, to fulfil the dream that they had nurtured for centuries, to get ”home” to Jerusalem.

The Ethiopian revolution plunged the country into bloody chaos exacerbated by successive waves of poverty and famine. Thousands of Jews poured over the border to Sudan which had a Muslim majority, strong ties to the Arab world and officially at war with Israel. Stuck in brutal overcrowded refugee camps they were expressly forbidden to even attempt to try and leave the country.

Then, in 1977, soon after his appointment as Israel’s president, Menachem Begin gave the long-time head of Mossad, Israel’s intelligence organisation, a new mission, to bring him “the Jews of Egypt”. Fulfilling the order resulted in the extraordinary Operation Brothers, bringing together hundreds of men and women from Mossad, the Israeli Military and from civilian life.

But the two key players were Ferede Yazazoa Aklum, one of the Beta Israel who had been brought up in a remote Jewish village in the highlands of Tigray 900kms from the Sudan capital, Khartoum.  He had been working for years with other Beta Israel helping spirit away individual families often with the co-operation of overseas airlines, diplomats and countries providing safe haven en route.

The other was Dani (his family name is never revealed), born in Uruguay to French parents, a former paratrooper officer, now Mossad, who had been based in Tel Aviv as deputy head of the department responsible for handling relations with intelligence services in the developing world.  He was incredibly hard-working, dedicated, inventive and resourceful but, when the occasion demanded, he could be stubborn and insubordinate.

Realising the initial methods used to get the Beta Israel out of the country was taking too long and was too vulnerable to detection, he and his team set up a fake tourism company which in turn set up a fake diving resort on the Red Sea staffed almost entirely by spies. They used it as cover to expand the rescues, both by sea, using an elite Israeli navy commando unit, and later by air, using elite unit of the Israeli Air Force landing on an improvised strip in the desert. By the time the Operation was called off, more than 10,000 Beta Israel had been brought to Israel.

They assiduously courted Sudanese officials, hosting several at the actual resort including Sudanese President Nimeiri at its official opening. Even when the Sudanese Government decided there was something dodgy going on in the area, they believed it was commercial smugglers bringing contraband into the country. And when it was too dangerous to continue Operation Brothers the team and all their equipment vanished as unobtrusively and efficiently as they had carried out their work.

Red Sea Spies is the story of the men and women who for lengthy periods lived double lives, constantly putting themselves at risk to work on the scheme, yet when interviewed by Berg, said they were simply “doing their job”. However, according to Berg it was clear to him they were “motivated by something far more visceral than that. More than once these individuals would use the analogy of the Biblical Exodus of the Jewish people who went from bondage in Egypt to redemption in the promised land. They felt they were carrying out something similar in the modern age.”

But the book also makes clear the thousands of Beta Israel men women and children were not passive victims being rescued. They were always “masters of their own fate” putting their own lives on the line, and in many cases being killed or brutally tortured, to reach their own promised land.

Red Sea Spies is a fascinating read made all the more so by the fact that although its having occurred was revealed in 1985, the details remained classified and were only revealed after more than 30 years. Berg weaves a compelling blend of culture and history, military planning and inspired, seat-of-the-pants improvisation, great acts of courage and humanity and appalling examples of bias and brutality. It would have been amazing as a fiction novel. It is all the more riveting for being true.  Red Sea Spies is published by Icon Books.