Anne Holt’s crime credentials are impeccable. After several years with the Oslo Police 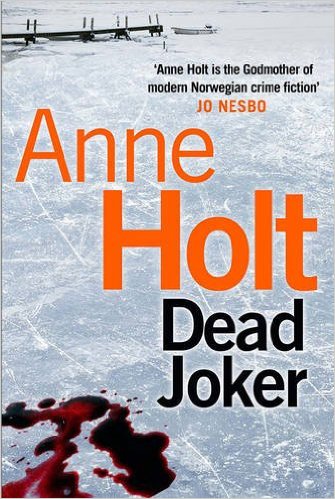 department she set up her own law firm then went on to serve as the Norway’s Minister for Justice for two years. She then decided to turn her skills to writing novels. It was a good move.

She has gone on to write six books starring Oslo University psychology professor and ex FBI profiler and DI Adam Stubb, and the series around Chief Inspector Hanne Wilhelmsen of the Oslo Police Department. Holt’s now sold more than six million worldwide, scooped up a pocketful of awards and earning the soubriquet of the “Godmother of Norwegian crime. It’s a lot to live up to.

Dead Joker released (in Australia) this week is the latest in the Hanne Wilhelmsen book. Brilliant, irascible, unorthodox, Wilhelmsen is called in when the wife of the Chief Public Prosecutor Sigurd Halvorsrud is found dead, decapitated, in the family home. Halvorsrud is found in the house, fingerprints on the weapon, incriminating evidence in the basement. Cut and dried. Particularly when he tries to pin the blame on a man who died several weeks before.

Then a well-known journalist is also found beheaded while Halvorsrud is on bail. As the pressure mounts on Wilhelmsen to solve the high-profile case so the clues lead her and her deputy, the amiable, supportive and sartorially challenged Billy T, into a labyrinth of secrets and alternative lives.

Wilhelmsen is an interesting character (my mind kept conjuring up the image of Brenda Blethyn as Chief Inspector Vera Stanhope from the British crime series Vera); a woman struggling to re-align the balance of a 24-hours-a-day job that is like oxygen to her and the woman whom she loves and who is now struggling with a potentially deadly illness. All this set against the bleakly beautiful Norwegian scenery.

Dead Joker has a cleverly intertwined plot that isn’t just about finding the murderer but explores the often tense relationship between police and prosecution service as well as the morally challenging operations of a network of vigilantes. As a fan of Scandi Noir I was surprised when I realized I had never read any of Anne Holt’s books before Dead Joker. My loss.

Dead Joker by Anne Holt, translated by Anne Bruce is published by Corvus. Other books in the series include The Blind Goddess, Blessed Are Those Who Thirst and 1222.