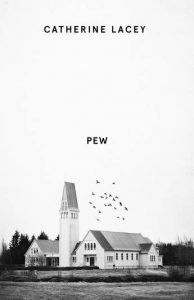 A stranger walks into a church in America’s deep south, looking for sanctuary. Not religious, but physical sanctuary. It’s worked before. Many times. When the churchgoers arrive, they do not wake the stranger, carrying on their service around the sleeping figure. When finally jolted awake the stranger doesn’t speak and gives no guide to name or gender. The churchgoers are curious but empathetic. One family invites the stranger to share their home and provides a name, Pew.

The congregation aren’t the only ones confused by the sudden appearance. Pew remembers only fragments of the past: lying in a canoe glancing up at the stars; a child watching as another child is carried from a diner; a narrow hallway; escape.

“I don’t know how it all came to this. It seems that time is somewhere else and what I can see here is not the present, but is, instead, the future, an eventual future, and somehow the present moment is back there somewhere I cannot reach and I’m stuck living here, in some future time. This body hangs beneath me, carries me around, but it does not seem to belong to me, and even if I could see them, I would not recognise my own eyes.

In her new novel, Pew, Catherine Lacey is again pushing borders, exposing the way societies compartmentalise; by gender, ethnicity, religion, social standing, power, and the prejudices this engenders.  Although Pew’s sudden arrival ignites confusion and contradiction it also seems to encourage the town’s people to use the silence to unburden themselves to her, revealing the undercurrent of fear and dark secrets that pervades the close-knit, seemingly God-fearing community.

The book is divided into seven sections each representing a day leading up to the mysterious, and increasingly sinister, annual Forgiveness Festival which is never specifically linked to the town’s history of lynchings.  Lacey carefully guides the reader to their own conclusions in a beautifully written and layered unravelling of individual and group culpability.

Pew by Catherine Lacey  is published by Allen&Unwin. Lacey’s previous novels are The Answer and Nobody is Ever Missing.