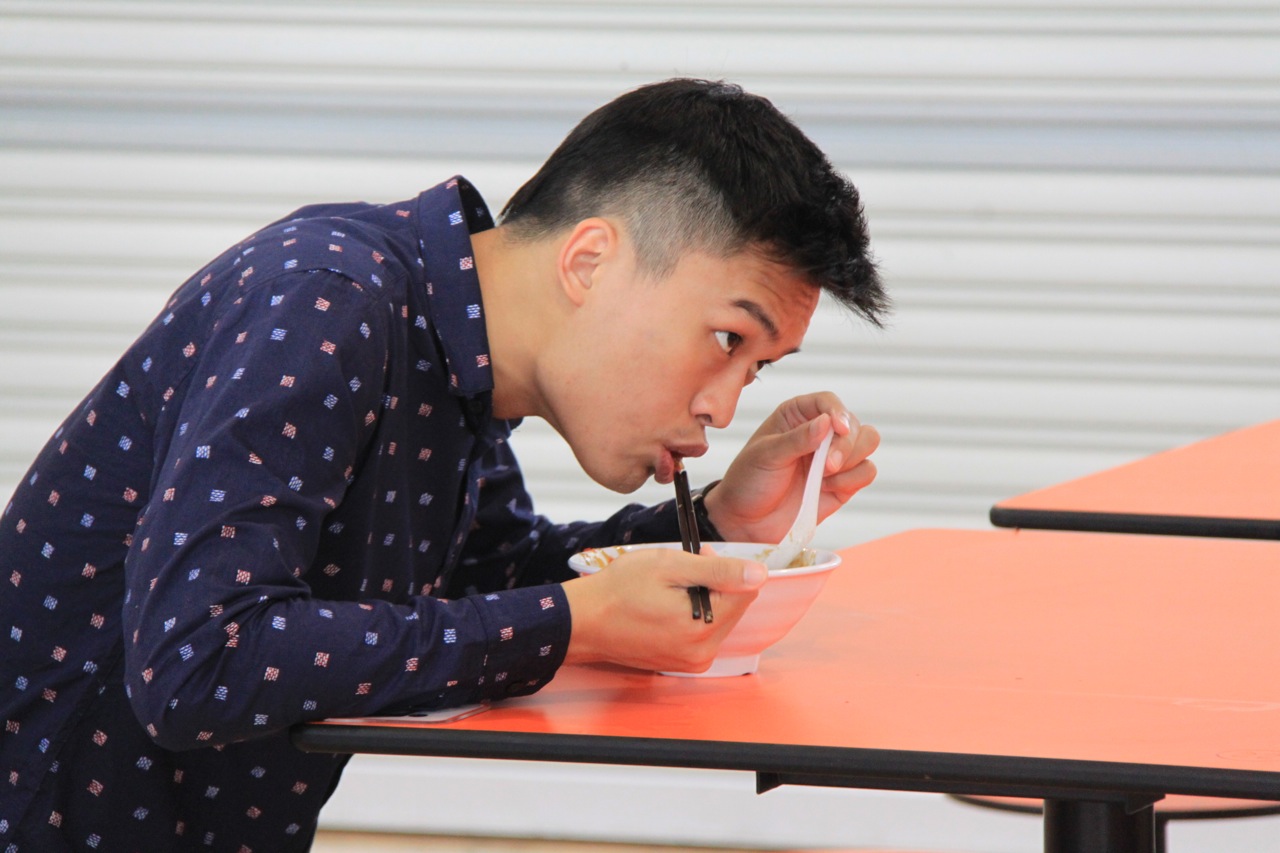 When I ask directions from the two grey-haired men, obviously making their way home from work laugh happily:  “The hawker market? That’s where we are going. Come along with us. This is the real Singapore food,” one confided conspiratorially. “Not that stuff they serve up for tourists.” In fact, as charming as the two men were, it turned out I hardly needed guides. The hawker centre at Bedok, to the north of Singapore city, is less than a block from the mass transport system station. It’s the station you want if you are visiting the Forest Adventure.

The new centre with 70 food and drinks shops, re-opened late last year after a total re-vamp that includes free wifi. It is light and bright, with open sides and increased seating. Part of the revamp included putting in large ceiling fans to help cope with the infamous Singapore humidity. This it does, 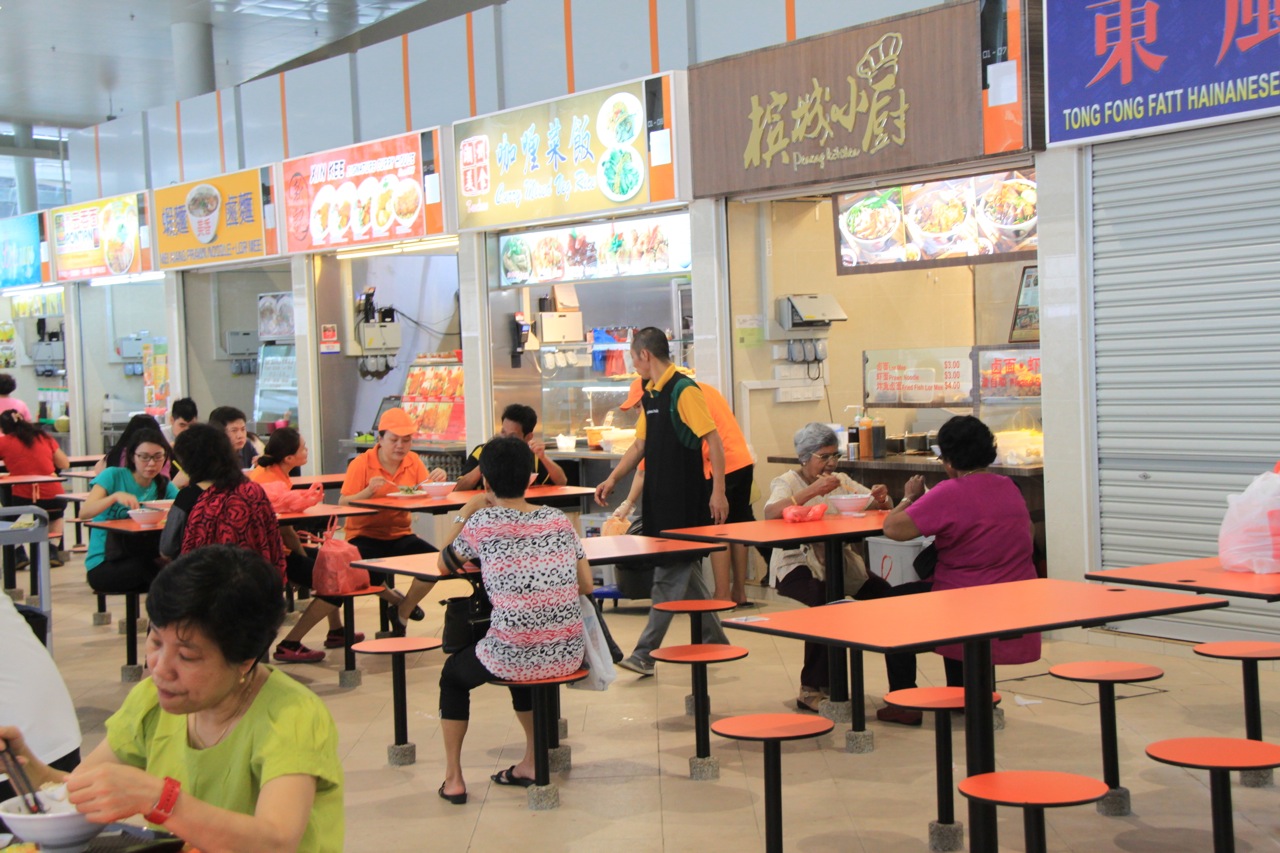 together with the smaller fans mounted on the columns, but bear in mind that you are sitting among dozens of small food shops each with several hot stoves going all day. And this is Singapore.

Food is king and here you will find examples of the huge variety of dishes that make up Singapore’s cuisine, all at incredibly reasonable prices. You just choose the kind of food you fancy, order and pay for it, and they’ll cook it fresh. You then find an empty spot on one of the small tables and 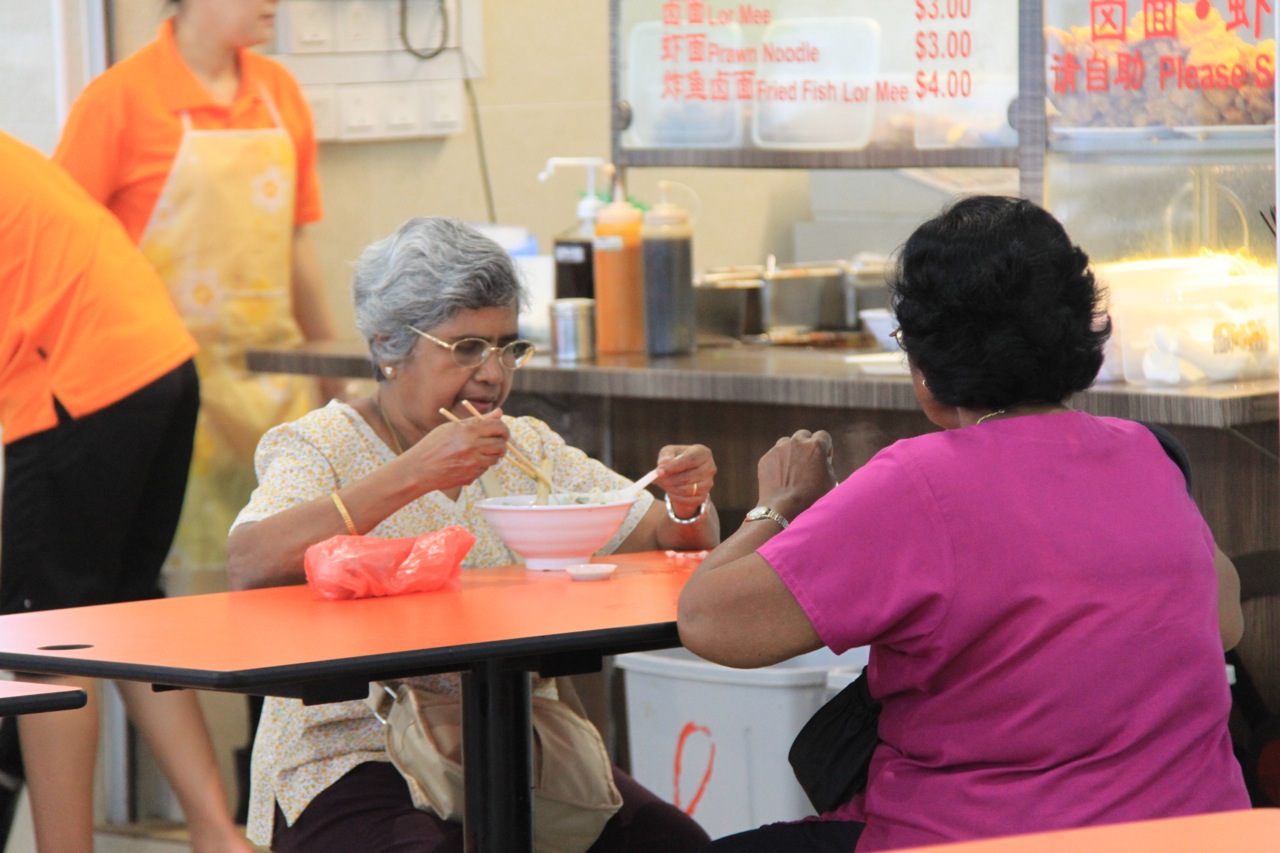 enjoy. It’s hard to find anything that costs more than $S4 and most is less than that. My fried carrot cake (red rather than white) at Mr Tan’s for example cost $S2.50 for a large plate. There are a number of apps available that will give you a guide to what’s the best food at Bedok centre. Or you could just follow what the locals are eating.

Betok is the place where locals eat. In fact, when I visited, there wasn’t one “European” in the whole place except me. Instead it was packed with people eating on their from work. Others were picking up food, presumably 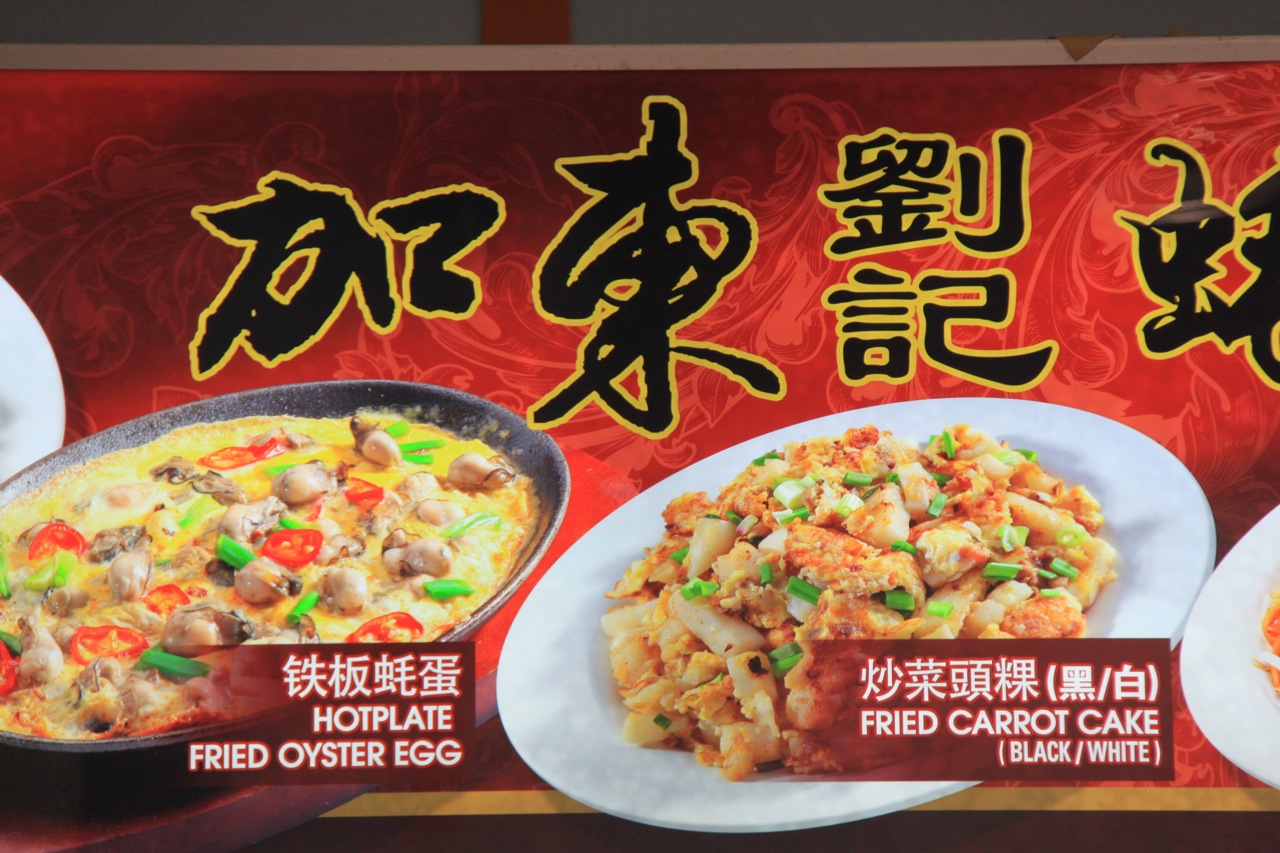 to take home with them. All the shop-owners are friendly and helpful. Between us and a good portion of mime, we managed to work out exactly (I think) what were the ingredients of some of the more exotic dishes.

Betok is not nearly as posh as the better-known Lau Pa hawker centre which is right in the heart of the business district of Singapore, near the ginormous Raffles Towers complex. At lunchtime it is heaving with office workers. 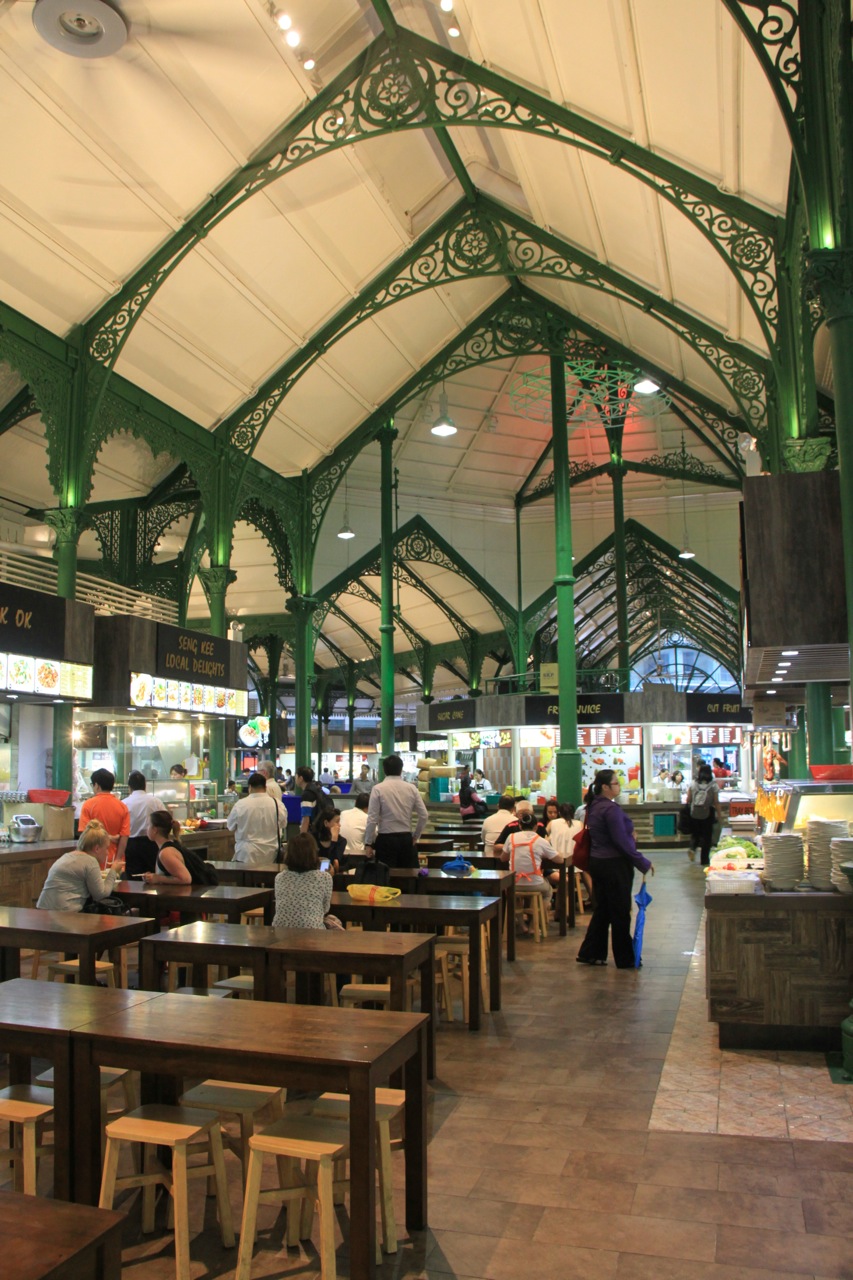 Lau Pa (left) is far more ornate than Bedok with an attractive wrought-iron frame. It has a wider variety of non-traditional food shops like a large patisserie and a juice shop that served Milo and the food is laid out much more as we are used to in western-style food centres. Inevitably, (when I was there a coach arrived disgorging dozens of tourists) the prices are higher than at Betok, but still very reasonable. And incredibly good.

Unfortunately, a one-day stop-over in Singapore didn’t allow enough time to visit probably the most famous hawker centre at Newton, which is the next MRT station on from Orchard on the North-South MRT line. There is however, always the journey home. If you are particularly interested in street food from around the world check out the 2015 Street Food Congress being held later this year in Singapore 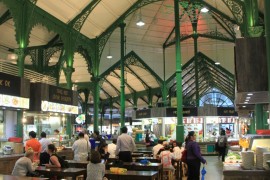