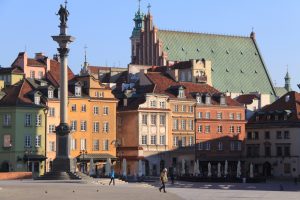 Early mornings are usually the best period of the day to explore new cities; that magical time when the metropolis is just coming to life but the streets are uncluttered by tourist throngs leaving the architecture of the buildings clearly visible

It’s six am and there is just a scattering of people scurrying to work, casting long shadows in the brilliant, barely-morning Warsaw sunshine. It’s chill still, although there’s the promise of a glorious day just as there was yesterday, and the day before. The city is reveling in the arrival of spring, a fluffy white blanket of blossom tops the trees, snowing down with the fluttering of each breeze. The planted beds of flowers a tapestry of colour. 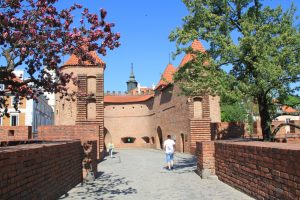 those parts of the city completely annihilated during World War 11. But in a triumph of optimism and determination over tragedy and destruction, they were painstakingly restored from the early 1970s to the late 1980s. To explore the towns’ medieval layout, walk the narrow cobbled streets and squares lined by architecture that reflects the country’s long and varied history, is to experience history in a new light every bit as real and authentic as others untouched by such devastation.

Architects, designers and craftsmen went to meticulous detail to recreate what had been thought lost. The Heritage Interpretation Centre at 11/13 Brzozowa gives a fascinating insight into both the scope and the intricacy of the work with a large model showing the war damage as well as detailed schematics of the re-birth of a city. 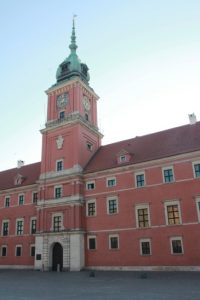 My starting point is the sprawling baroque Royal Castle, first built in 1596 when the capital was moved from Krakow to the more centrally positioned Warsaw. It dominates the vast Plac Zamkowy and also has stunning views down to the River Vistula. The inside, which I visit later, is lavish and impressive, particularly the Canaletto room, the walls of which are choc-a-bloc with paintings of Warsaw by the famous Italian painter.

Not far away down one of the narrow streets radiating outwards is the towering Cathedral of St John,
interestingly rebuilt to its original Mazovian Gothic plans rather than an exact replica of the building almost destroyed in the war. There are regular lunchtime and evening concerts usually featuring work by the composer Chopin, Poland’s favourite musical son, which show off the Cathedral’s fine acoustics.

It’s stating the obvious that Warsaw (in fact, Poland) had numerous churches, sometimes several all in 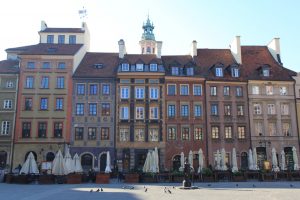 a row. You only have to look at the skyline. It’s estimated that approximately 90 per cent of the population is Catholic with as much as 60 per cent practicing regularly. In the Old Town and New Town alone there are more than 10 major examples. Try and resist the “seen-one, seen-‘em-all” mentality. Each tells of a different chapter of Poland’s long and varied history   with unique architecture and priceless ecclesiastical treasures (including some very serious baroque bling).

Old Town Square is a lovely former market square each side lined by buildings that used to be owned by the rich, merchant families. The flat fronted buildings (reminiscent of Stockholm’s Gamla Stan), rising six or seven stories, are decorated with individually patterned plasterwork as well as some intricately painted murals. One whole side of the square is inter-connected houses that make up the Museum of Warsaw, currently under renovation. In the centre of the square is a dramatic statue of the sword-wielding Mermaid, the city’s symbol. 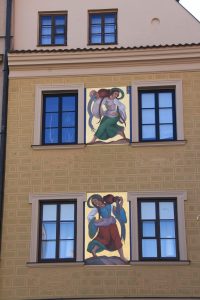 The red-brick Barbican, a defensive fortification, and the City Walls, parts of which have survived from the 14th Century, mark the transition from Old to New Town which first appeared at the beginning of the 15th Century and gradually grew into a separate borough.

Ulica Freta, the main road in the New Town, is lined with what would originally have been fashionable houses for the wealthy now mainly antique shops and restaurants. At number 16 is the museum in honour of Marie Sklodowska-Curie, who grew up there. Madame Curie with her husband Pierre, was awarded the Nobel prize for discovering radioactivity. She later won a Nobel Prize for chemistry in her own right and there’s a fine statue of her overlooking the river. The street now mainly consists of antique shops and restaurants leading into the elegant New Town Square. While less busy and boisterous than the Old Town Square it has an elegant charm and in the evening comes alive with diners.

One of the most moving sites in the New Town is the monument to the 1944 Warsaw Uprising, a 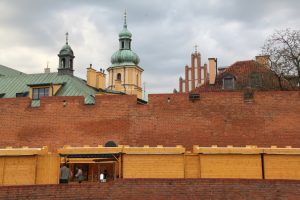 modernistic representation of soldiers from the Home Army fighting on the streets but also descending into the sewers which they used to secretly move around the city. Memorial plaques are widely distributed throughout the city, little surprise considering their desperate fight against formidable odds and the terrible price the whole country paid for its defiance.

These early morning walks got to be a habit during my stay. It wasn’t just the jet lag. Each time I wandered down one of the narrow cobbled streets I noticed something new, like the spectacular collection of public clocks there are, or a particularly elegant frieze. By 10, the crowds are beginning to gather, but by then the restaurants are opening. Time for breakfast. 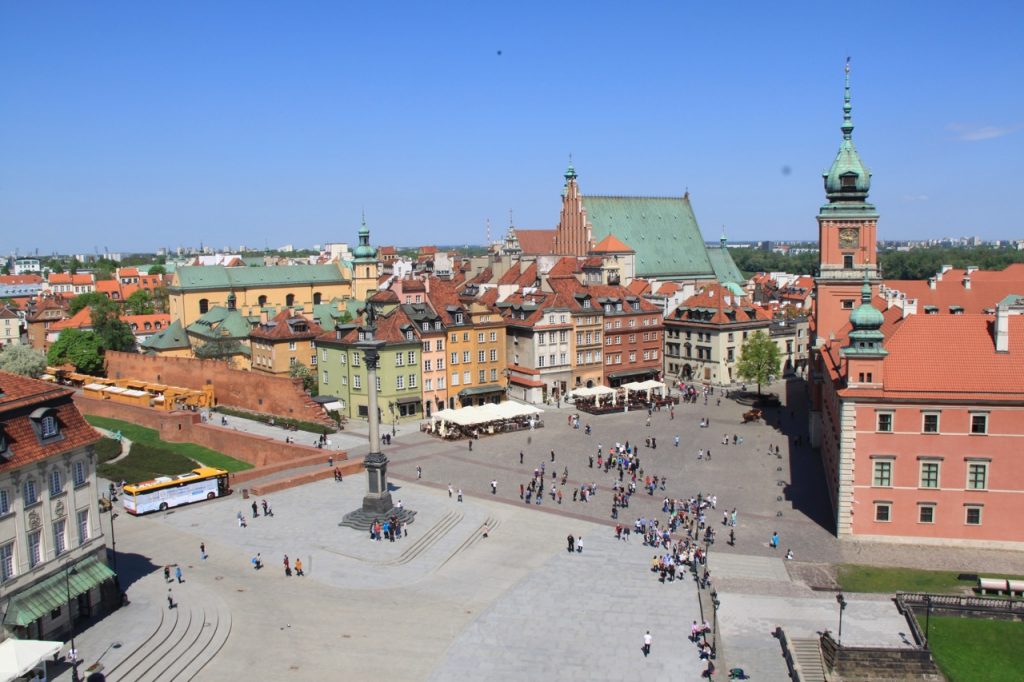 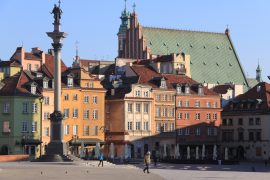 Early morning in the beautiful Plac Zamkowy, Warsaw, Poland
Why walk the beautiful streets of Krakow when these two are so keen to take you for a ride? 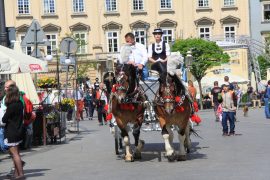