It is just after 9am and still slightly cold. The sunshine has not yet completely broken through the mist which lies like a veil across the countryside giving

everything a slightly eerie, smudged effect. It’s been a bumpy, noisy, take-no-prisoners ride from our hotel in Biratnagar, Nepal’s second city, to a tiny rural community not far from the border with India. The community where we are being hosted is home to people from dalit indigenous backgrounds such as Pasman, Sardar and Chaudhary; people who are doing it tough, most existing on the equivalent of just a couple of $US a day.

As we drive we transition from teeming dirty, chaotic city to a vast sprawling patchwork

quilt of small cultivated fields that sprawls far into the distance. It is stunningly beautiful but behind the beauty lies a hard daily reality.As we crunch and crash along the rough dirt road that gets narrower and narrower until it is little more than a track, the incessant bark of the horn clears people and the animals tethered to feed. Occasionally we screech to a halt as the driver’s mate ushers a baby goat or hen with her new baby chickens to safety. The world may be harsh here but life is important.

We are here as part of the Habitat for Humanity Australia’s Global Village program,

which gives volunteers a grassroots opportunity to literally help build a house. Working with FORWARD, the local partner aid agency, more than 10,000 houses have been built. The main aim is simple, to improve housing, sanitation and health. But behind it lies the important sub-text ; to build local competencies, to change attitudes, to improve the daily lives of women.

First, there are formalities with representatives from the village and from Forward

greeting us warmly; garlands of orange blossoms placed around our necks. Photographs taken. It is incredibly touching and inspiring to be made so welcome. Language is a barrier that easily dissolves in front of such obvious good will on both sides.

Smiling shyly through it all is Jitansari Sardar, the lady whose house we will be working on. Jitansari, a 50-year old widow who lost her husband more than a decade ago raising her two daughters on her own, is a tiny

figure but as we discover she has a feisty demeanor and endless energy as she judiciously cares for her livestock, even among the mayhem the build is causing with its audience of locals watching each move.

The roof of her old house was uncomfortably low and made of straw; the walls of bamboo twigs. It had a single room with a mud floor. During the rainy season the roof leaked turning the floor into a quagmire. What we hope to leave behind when we leave will

have concrete pillars, wooden rafters and substantial corrugated iron roof. The walls will be rendered bamboo; the floor will be of precast cement concrete (PCC) over stone.

Ceremonies over and our group cut the huge bamboo to length then split it into sections that will be lathes (not as easy as it sounds) to be woven for the walls. Each must be prepared so that it is suitably bendy to allow it to be woven into the walls (also not as easy as it sounds). We are armed and dangerous with the menacing looking traditional Nepali curved knives, saws, hammers, enthusiasm and energy, if not a terrific amount of skill. 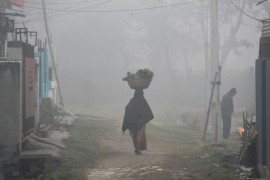 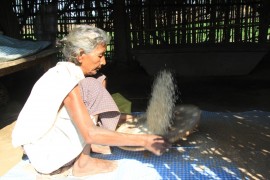