How many authors does it take to write one short story? Fifteen it turns out if the
literary experiment just published in The New York Times is anything to go by. Joshua Ferris, shortlisted for this year’s Booker prize for his novel To Rise Again At A Decent Hour, started off the story, Exquisite Corpse:

Their mothers were distant cousins long estranged. They gave birth within minutes of each other, same hospital, different rooms. (I was not there.) The boy grew up west of the interstate, on the outskirts of the university; the girl in a high rise with a balcony overlooking the water. He won scholarships; she dropped out. Both married, had children, worked hard, suffered losses. In the end they were alone. She had an early-morning flight, he took the overnight. The next day they found themselves, before the small explosion, across from each other in the cafe, in a foreign land in the grip of turmoil, strangers still.

He passed the literary baton to  Jenny Offill “He was talking about the war now. The war! The war! It was all the men ever talked about. (Was it coming? Was it coming? Hell, yes, it was coming!) He spoke darkly of beef jerky, peanut butter, disposable wipes. He’d trained himself to eat thistles.

“Get guns,” she said. “I hear guns are good.” She thought of her precious hoard: seven cans of creamed corn, chocolate frosting that NEVER expired.

He urged her to study herbal medicine. No, no. She already had a backup plan.

Did you hear about the suicidal homeopath?

She took 1/50th of the recommended dose.

Ricard Flanagan wins Man Booker Prize with The Narrow Road to the Deep North
Peace and quiet plus a fantastic view: a gem of a French village 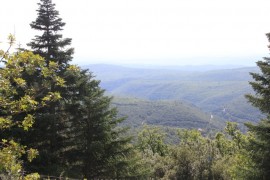