It glistens, gold, silver and black, subtle sensual folds, a monumental shimmering tapestry that transforms the most banal of throwaway items into a pointer to Africa’s history. Adinkra Sasa is part of El Anatsui: Five Decades currently on display at the Carriageworks, Sydney as part of Sydney Festival.   It is the first major Australian exhibition by the Ghanaian artist who is one of the world’s leading contemporary artists and won the prestigious Gold Lion award at the 2015 Venice Biennale.

Yet it was the chance discovery of a bulging garbage bag that provided the inspiration for his hugely successful artistic trajectory. “The curious bag that I found in the bushes contained bottle caps of hard liquor like whisky, brandy and gin, which I took to my studio to see what I could do with them … that eventually led me to what I have been working with for 15 years now,” he said in a recent interview on Australia’s Books and Arts. 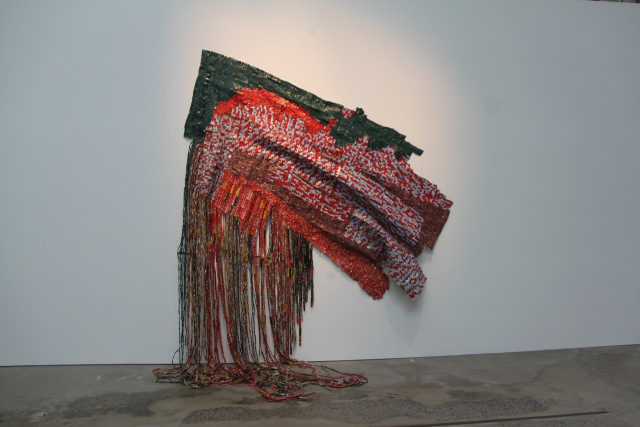 “They sat in (my) studio for well over a year before the idea came that if I leave them as individual bottle caps they don’t make much impact, they don’t have a strong voice, but if I have a way of bringing them together in something larger they would have a voice which people would have to listen to”.

He started linking them together with copper wire and over time developed a wide variety of methods of joining them, and treating them, so he could present them in a wide and versatile series including transparencies and pastels. “There is the added bonus that the caps provide a being a form that is free there are so many ways that you can handle it that it becomes sculptures that are very free. It has a greater advantage over a regular painting.” 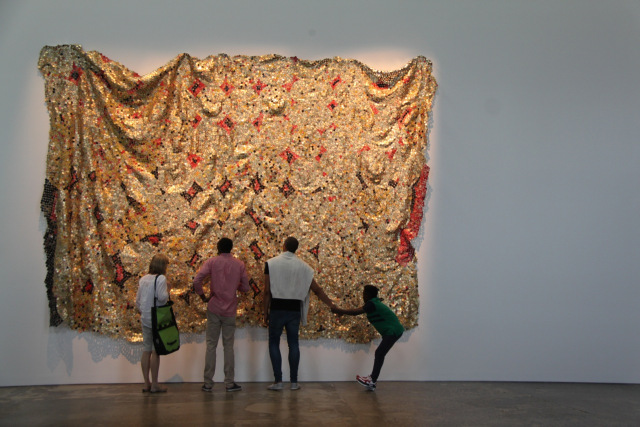 As well as providing the opportunity to transform discarded items into something new and startling Anatsui says the bottle top brands yield a lot of information about the social, political and topical issues that are in his society.

“Used bottle tops (are) a repository of the history of my place. When the alcohol was brought to my part of the world it was an item for trade, for barter, you know, use it to exchange for goods and eventually the goods came to include human beings who were transported across the Atlantic ocean to produce the sugar cane and juice and other things that were used to produce more hard liquor. “ That hard liquor was then sent to Europe and on to Africa so the caps, he says, are monuments to the link between the three continents and the three peoples.” 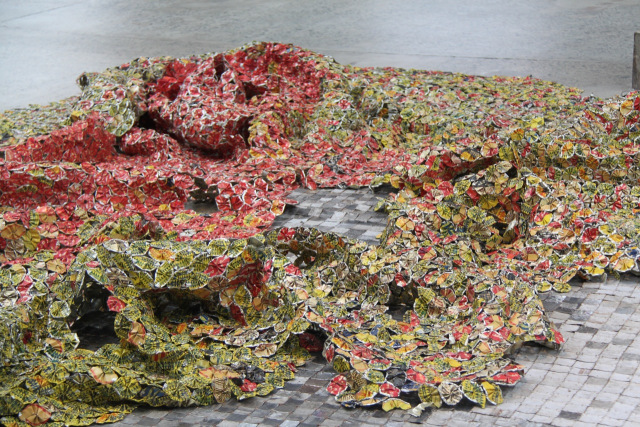 Anatsui was a relative latecomer to art that embraced the unique culture of Ghana, and Nigeria where he now lives and works, teaching at the university there. After his mother died when he was four he was raised by his uncle and his life was “school and church” his education followed a formal European influence. It was only at University, under the influence of a pioneering professor that he found himself introduced to the power and scope of the indigenous art world. 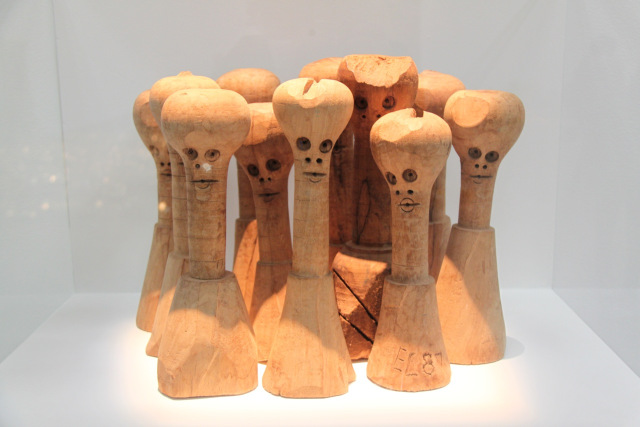 As well as the massive works created from the bottle tops the exhibition also includes several examples of his earlier works including drawings and wood sculptures like the eerily mesmerising Group Photo and Devotees. It’s a wonderful exhibition, perfectly balanced in the converted industrial interior of Carriageworks.

El Anatsui: Five Decades is on at Carriageworks in the Sydney suburb of Redfern until March 6 2006. Entry is free. Listen to the full interview with El Anatsui.

Review of Fuminori Nakamura’s The Gun, the dark side of Japan
Review: The Secret Chord by Geraldine Brooks is a rich reinterpretation of the life of King David
Navigate
Follow