It’s almost 10am and Madrid is coming alive. Some have been up since early – the street cleaners and bin collectors, the delivery drivers, their trucks heavy back doors yawning open. Office workers stride purposefully, seemingly oblivious to the magnificent facades of buildings like the Cebele Palace, the statues and fountains, the serried rows of carefully maintained trees and bushes.  It’s a beautiful day. I had left the apartment, perfectly situated close throngs of visitors that pour into the Spanish capital, particularly in the summer months, are up and about.

I’ve had nothing but a quick cup of tea and now thoughts are turning to food. Everywhere, cafes are in full swing 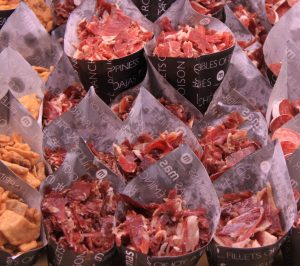 . The chequerboards of little outside tables are already filling up, each plate of cooked breakfast dazzling passers-by with the delicious smell. But I’m on a gastronomic mission.  Just a stone’s throw from the Plaza Mayor lies the Mercado de San Miguel (Market of San Miguel) a striking steel and glass cathedral where visitors jostle to pay homage to the country’s culinary heritage.  Constructed in 1916, by the late 1990s it was in severe difficulty, facing increasing competition from supermarkets and restaurants. Then, in the early 2000s, it was bought by private investors  and renovated, re-opening in 2009 as a market focusing on the country’s finest produce. Now declared a “property of cultural interest), it has become one of the city’s top attractions, popular with tourists but also with locals. And with good reason.

There are more than 30 individual vendors each selling freshly made tapas. It’s as  pleasing to the eye as the palate. They range from the simple such as mixed olives and cheese; chopitos (battered baby squid lightly deep fried), cones stuffed with delicate slivers of ham, chorizo discs piled on toasted bread squares,. Pick a ham sandwich from the geometrically designed display. Or maybe a serving of plump gambas, prawns served with a variety of sauces. There are tempting tortilla and 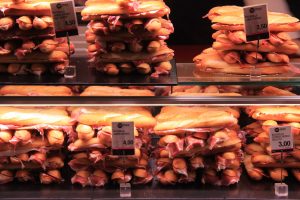 the juicily spherical albondigas (meatballs with sauce). Steaming yellow dishes of paella.  But, in the end, I am drawn  to La Casa del Bacalao where I forgo the tempting Galician style octopus and cod foie gras for a selection of brandade (salted cod) on fresh bread. Bliss.

“Would you like some wine with that?” the elegantly coiffed lady at one of the stalls calls out as I make my way, plates of brandade carefully balanced, towards one of the empty tables. Behind her towers an awesome selection of wines and sherries.  It’s tempting. So tempting.  But the day is yet young and I’ve got a visit to the Prado planned. Fortunately, it’s Saturday and the market is open until 2am.   So there’s plenty of time for a return visit. Some more tapas. And a glass. Or two. 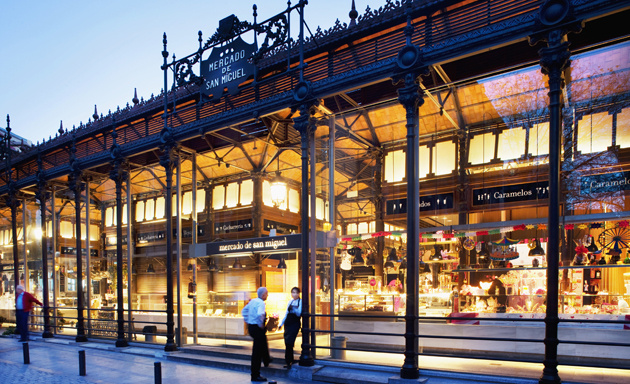