In Colombia coffee is king. For decades it has driven the country’s economy through exports of its top grade Arabica beans. But increasingly it is also important to

tourism as visitors flock to the beautiful key coffee growing area, now designated a UNESCO world heritage landscape with the lush green foliage, angular geometric contours and quaint historical villages. So it comes as something of a shock when travelling throughout Colombia to hear a constant litany of complaints about the brew served up in many of the cafes and hotels. Happily, all that is changing. Driven by the increasing influx of visitors who are used to drinking perfecto Colombian when at home, and the number of South Americans travelling overseas and finding out what heavenly cups of coffee are available, a western coffee culture is developing.

Pereira is right at the heart of the main coffee “triangle” made up of the cities of Cali, Medellin and Bogota. Once off the main highways, the whole vast area is a network of narrow switchback roads that offer staggering views at every turn; neat rows of coffee stretching off into the distance and beautiful little villages like Salento, Armenia, Palestina, Filandia and Chinchina. Although there are some magnificent Haciendas with vast estates, about 80 per cent of the coffee is grown on small family fincas, passed down from generation to

generation, and operate as a collective to market and sell their beans. Gustavo Villota Leyva is a man on a mission: to turn the world on to quality coffee and to make his family’s San Alberto brand the Chateau Margaux of the coffee world. At Hacienda San Alberto the coffee plants covering the hillsides all around us are a riot of colour. The bushes, which carry all stages of the growing cycle at one time, are bursting with the ripe red “cherries”, the yellow maturing beans and the new green ones. Hibiscus with their neon blossoms provide a protective guard of honour along the end of each row of the mature, cropping bushes.

As we achingly climb the incredibly steep incline to see the “secret” nursery potentially developing new varieties, we occasionally give way to one of the small army of pickers each manhandling a huge sack of berries down from the hillsides to the hacienda’s processing area. The pickers, many of whom are second and even third generation workers sleep and eat at the finca and are paid on quantity of berries picked with a skilled worker harvesting as much as 200kg per day in a good season.

Occasionally one will stop for a brief chat with “the boss”. The subject? Soccer. San Alberto has built a small café and terrace for visitors that seems to float above the expanse of coffee clad hills and the village far below Here you can savour the dozens of varieties of coffee brewed by a team of expert baristas. The hacienda also runs its special coffee “baptisms” where visitors learn everything from creating to fully appreciating the perfect cup. 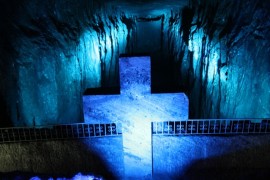 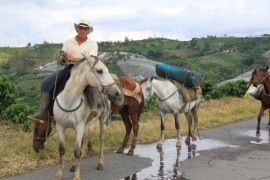