After the hustle and bustle of Kathmandu, Thimphu, the capital of 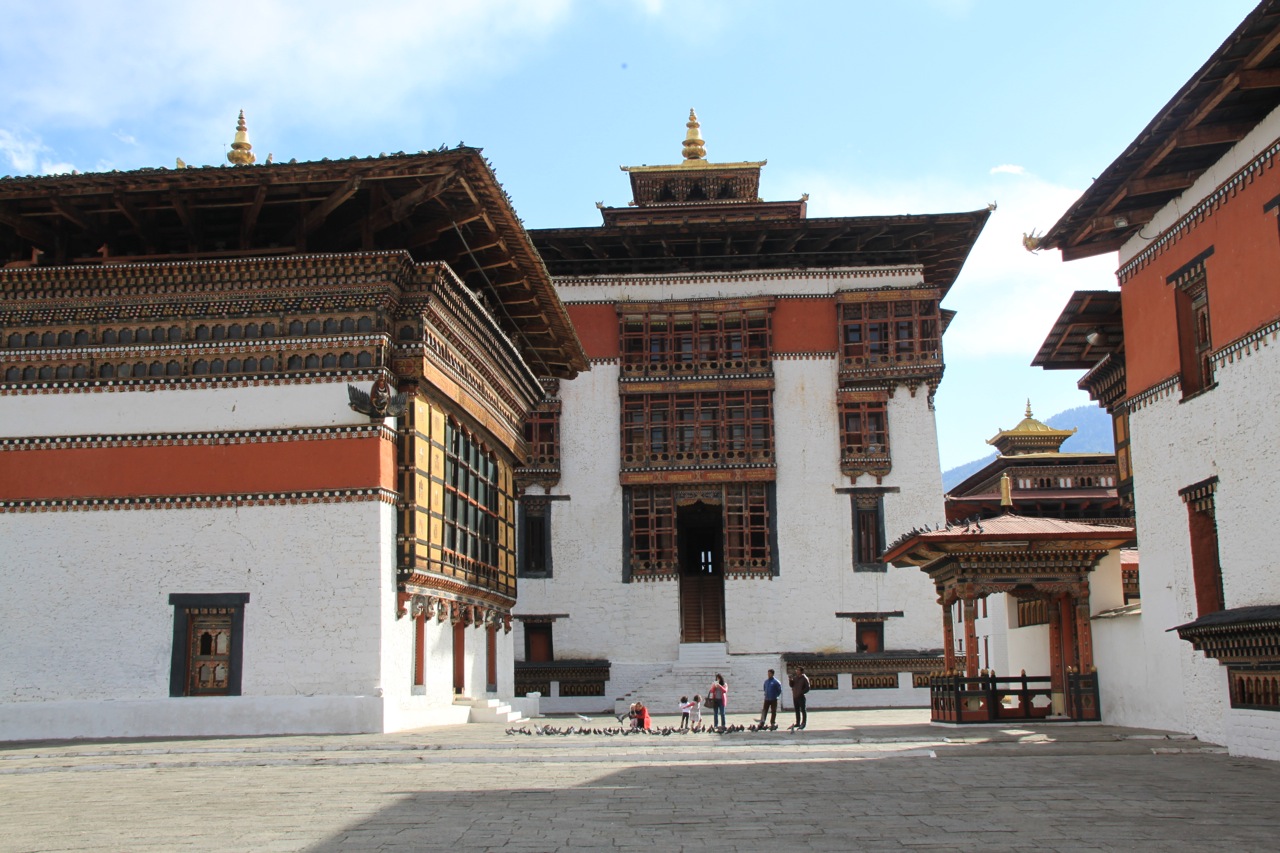 Bhutan, is a shock to the system. In a good way. A very good way. Despite undergoing an obvious growth spurt that has resulted in new hotels and restaurants, it remains serene and magical.

True, it is winter, the quietest time for tourists. This makes getting around the sights, bliss. But you get the impression even at the height of the season it’s pretty orderly. There are no traffic lights, just one balletic policeman on point duty. Drivers are courteous if occasionally haphazard. The locals, most dressed in the traditional gho (for men) and kira for women, are reserved but quick to respond to a greeting or smile. 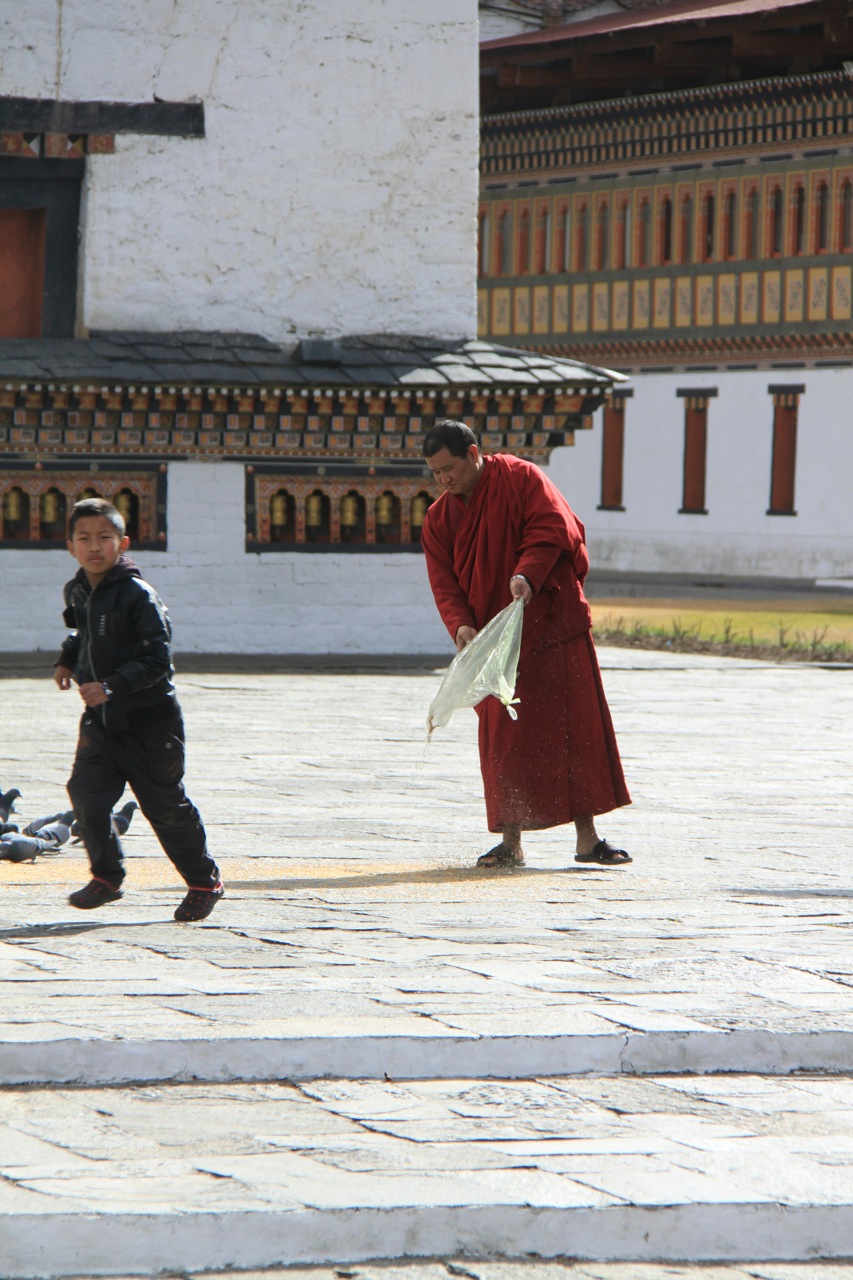 empty and the police on security duty perk up with the sudden distraction of our arrival. There’s a chill wind blowing but the sun is hot and shining brilliantly; the sky a cloudless dazzling blue. We walk past the very modest palace in which the current King Jigme Singye Wangchuk lives and the beautiful sprawling National Assembly building.

The Dzong has a dual civil and religious function, part of it housing the secretariat and the King’s offices as well as a couple of key ministries, all of which are off limits to visitors, the rest the monastery which is open to the public. It’s impossible not to be awed by the sweeping courtyard and the towering monastic buildings with their 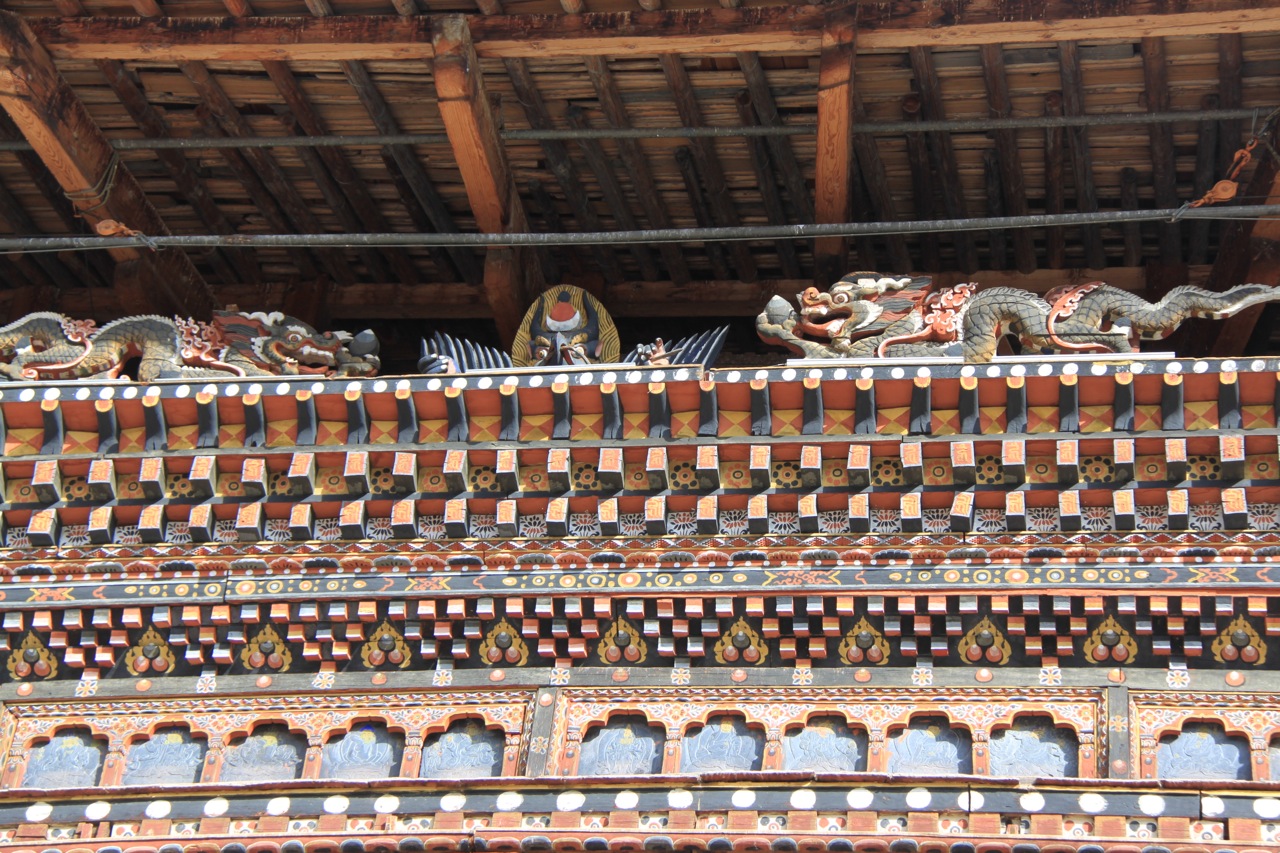 intricate decorations and carvings of traditional guardians. On one side is a wall of prayer wheels and a purple robed monk sends the flocks of pigeons swirling as he throws down seed. This historic dzong, has had its fair share of fires and damage from earthquakes but was rebuilt over the centuries and has been carefully restored over the past few decades. It was the site of the King’s coronation and hosts most of the official gatherings in Thimphu, such as the tsechu festival.

It’s Sunday and nearby the weekend market is in full swing. The large ground floor area

of the purpose built market ground is full of separate stalls selling beautiful vegetables, rice and grain, dried legumes and bulging bags of fresh, dried or powdered chili. This is where most of the city is stocking up on fresh produce for the week. Upstairs there are more vegetables plus some fruit stalls and a half dozen selling fresh and dried cheeses, huge jagged slices of pork and

loops of fat blood sausages. Across the large stone and wood covered bridge, the rows of colourful prayer flags

dancing in the wind, lies the market selling local artifacts and the largely imported clothes and footwear. But as the sun begins to set the full impact of the wintry weather is suddenly apparent and people are hurrying home. The sounds of the city, as subdued as they were, are fading. Tomorrow, people will be up with the sun. 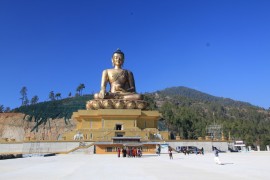 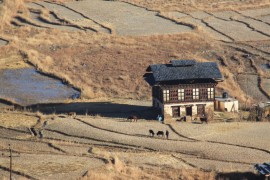