For a heart-stopping moment it seems we are heading, really fast, for a barely visible sandbank 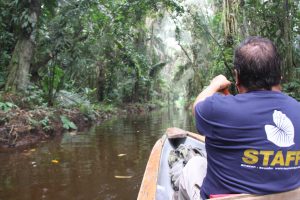 on which an elegant white heron stands, an imperious lone beacon. Then, with a perfectly timed flick of his wrist, our helmsman quells the engine on the large, motorised canoe and it slews into the cross current so the Rio Napo’s natural flow takes us swiftly past the hazard.

Once clear, he guns the motor and we are off again, leaving the heron unruffled even if our
hearts are pumping wildly.This is to be the pattern for our exhilarating two-hour journey from the port city of Coca, capital of Ecuador’s province of Orellana, riding the tumultuous river, which eventually tumbles into the mighty Amazon.

Coca, an unprepossessing town, is the centre of Ecuador’s controversial oil industry, situated in the heart of some of the world’s most rare animal and plant habitats. Now, it is increasingly carving out a new future for itself as a stepping-off point for Ecuador’s extraordinary Amazon jungle. 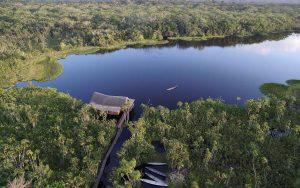 On our way downstream, we power past a tree line so dense it could be brick, occasional river-edge native villages where children wave enthusiastically, and the only too obvious signs of the oil industry sending burn-off flames into the sky. We disembark at a jungle clearing and are guided towards a wooden pathway through the forest where we try to identify the birds and get occasional peeks of the river thundering past.

After 20 minutes we arrive at another small wood-canopied clearing where several much smaller, dugout canoes are moored. As we climb aboard, strong practised hands are there to help when we wobble precariously. No thunder of engine or river now. Instead, just the steady drip of water as our guides, seated front and rear, paddle us down an increasingly narrow dark waterway, and the sudden sound of a bird, which we strain to see in the dense foliage that forms an abstract ceiling above us. Clearly our small group has read of the presence of piranha and the awesome anaconda. No hands trail through the water, however inviting.

Finally, we emerge into the sprawling openness of Laguna El Piche, its waters a mesmerising 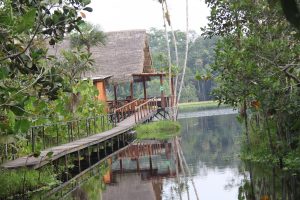 inky darkness bleached by tannin and framed with wild hyacinth. Our destination, Sacha Lodge, is nestled on the opposite shore. A couple of strange punk-haired hoatzin (also known less exotically as the stink bird) stare down on us from the trees and a pure white egret swims elegantly alongside as we moor.

The network of boardwalks provides a web linking the main communal buildings of Sacha Lodge with its 26 secluded cabins. Each is fitted out with private bathroom and shower, comfortable bedroom including such useful extras as a special dry box for cameras, a fabulous “nothing gets past this sucker” waterproof poncho and a deck complete with hammocks. On our first morning we watch a black agouti, a large sleek rodent (think big black dog), coming and going from its underground lair right below us, completely oblivious to us..

Breakfast and lunch are on the beautiful lake-edge restaurant beside a small swimming pool with netted sides to prevent unwanted visitors such as a caiman. It’s also a perfect spot for enjoying spectacular sunsets and the lightshow provided by dense canopies of stars on cloudless nights. Dinners are in the main double-storey thatched lodge, which also has a very well-stocked bar and small but useful library.The food is delicious, plentiful and varied, with an assortment of local dishes as well as more conventional offerings. 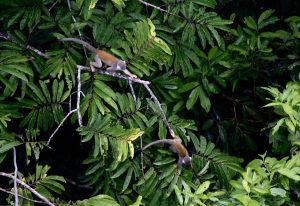 The twice-daily guided tours for groups of five to seven take place in the early morning or late
afternoon when the wildlife is active, so we quickly get used to untimely starts and post-lunch snoozes. All activities set out eith-er by directly walking from the main lodge area then disappearing into the intricate network of trails, or boarding a canoe and heading off down one of the creeks that crisscross the 1800ha site.

Our guides are Luis, a highly skilled bilingual naturalist who once accompanied David Attenborough filming one of his groundbreaking nature programs, and Werner, a member of the local Quichua community, one of the indigenous people of the lower Napo region. As well as running the beautiful butterfly house and studying the two main species found around the lodge (the morpho and the owl), Werner has collected the songs of more than 130 resident species of birds.

There are no roads here and no motorised vehicles. On our first day we walk single-file staring 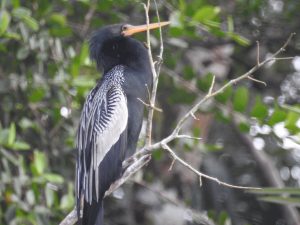 at seemingly impenetrable foliage, trying to get our eyes used to spotting a significant movement or plant or insect. An arm is raised. Luis indicates us to stop. Werner moves forward a few paces, head down, then turns and smiles. We huddle around as he points to a seemingly endless army of leaf cutter ants, which boast an intricate social system, on their way home to add to their extraordinary constructions. We learn respect for the bullet ant after getting close up and personal with its mighty mandibles.

Luis stops by a thinly populated copse to explain the intimate and intricate communication system that links the trees, providing warnings of insect attack or providing nourishment to each. While the locals have long known about trees’ means of underground chemical communication, science has caught up with it only relatively recently. 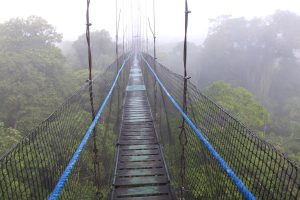 Although the stay at Sacha is unforgettable, the highlight has to be a giant canopy walk, with 300m of pathway suspended between giant metal pylons more than 60m high, offering an unrivalled view of a seeming alien planet. This is a bird-watcher’s paradise with more than 500 species spotted since it was opened in 2004. As we walk from pylon to pylon, an extended family of sugar monkey, one of six types native to the area, tumble and cavort below us. Two toucans pause in a nearby tree, just long enough to allow the perfect photograph. Other birds prove elusive for our lenses, visible for only an instant.

Luis and Werner’s knowledge is encyclopaedic, yet even they are overwhelmed with boyish enthusiasm when they spot a potential avian newcomer, and they go to endless effort to help visitors get the best pictures. Over just a few days we spot more than a dozen birds I’d never seen, including my favourite — the beautifully shy but showy, wire-tailed manakin.

Sacha has grown carefully since its Swiss owner first moved there, expanding into and, where 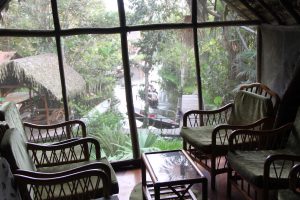 necessary, rehabilitating land bought from local families, many of whom work at the resort to earn much-needed income. Everything that can’t be grown or disposed of locally arrives and departs by canoe. Water comes from an on-site well. Everything that can be, is recycled and we don’t spot a scrap of rubbish during our entire visit.

There is nothing, not even an afternoon of apocalyptic rain (this is the Amazon after all), that we do not enjoy about our visit. We even grow to enjoy the silent company of Tomas, our cabin’s resident tarantula.

This article also appeared in The Australian.