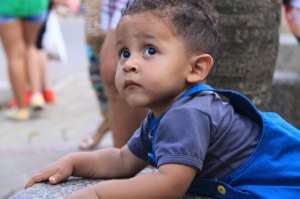 Medellin has been internationally defined by its criminal past as the drug capital of the world and the brutal internal war with the ruthless cartel run by Pablo Escobar. But Escobar is decades dead and the government is working aggressively to re-brand Medellin as a tourist and investment attraction, building on its position as the capital of ancient Antioquia with fine buildings and beautiful squares (below) as well as spectacular scenery. “We have moved on” is an expression you hear a lot, yet inevitably, tourists are fascinated by Medellin’s past and eager to see the remnants of the excesses of Escobar’s reign. The days 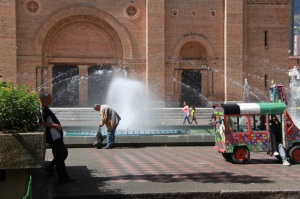 we visited, headiness in the local newspaper screamed about the growing problems of the now feral hippos, which escaped Escobar’s private zoo after his death. For those interested, and that includes many Colombians among the tourists, here are tours of places like Escobar’s Hacienda Napoles, a sprawling over-the-top farm. 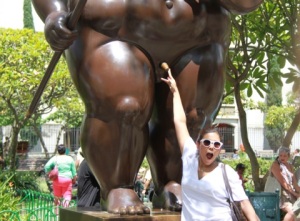 The city itself is fascinating, located in a narrow valley with high-rise office and apartment blocks soaring skywards alongside the craggy peaks that encircle it. Downtown Medellin is a bustling mix of tourist and locals with plenty to see around the Plazoleta de las Esculturas, like the pretty Ermita de la Veracruz colonial church and the Museo de Antioquia with its large collection of pre-Colombian artefacts. Make time to fully appreciate the large display of larger-than-life statues by one of Colombia’s most famous artistic sons, Fernando Botero. The Metro is the transport 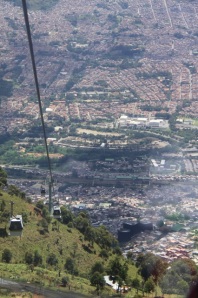 artery, particularly for those on low incomes, and includes a cable car service to the poor barrios, Escobar’s home turf, which cling, sometimes precariously, to the hillsides. Riding the cable car offers a cheap and absolutely stunning view of the city. Officials say that they are working hard to improve conditions in the poor barrios including extending the Metro and giving tenure to some of the families who have built illegal shanties in which to live.

Medellin is the heart of Colombia’s textiles and light manufacturing, and also the important cut-flower export market. Travel a short distance outside the city and you will find yourself amid lush green hillsides, home of thousands of fincas, usually small family-run farms, that supply blooms for market. Every August, there is the spectacular weeklong Feria de las 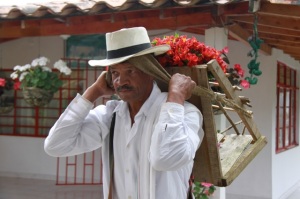 Flores where about 400 traditional campesinos (peasants) parade through the street with huge complicated floral arrangements strapped to their backs. You can go on tours of the flower fincas and the families who run them are friendly and welcoming.

In the downtown parts of Medellin there are clear signs that the economy is on the up and a cosmopolitan middle class is evolving.

Modern and sophisticated clubs and restaurants are springing up alongside the smaller, traditional eateries. Like the other Colombian cities, they party hard, and late. Medellin has done it very tough in the past but there is a buzz around the city that accompanies the optimise of officials. 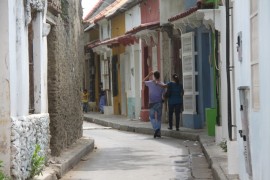 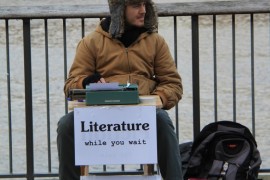