To be honest, after our soggy morning first climbing, then descending, the ancient Jizu Pass, close to Kiso-Fukushima, any respite from the rain would have been welcome. As it was, when we arrived, tired and dripping, at Poppoya on the Kaidakomen Plateau, we found ourselves in our own little haven.

Proprietor Mitsuko Ando welcomed us like long over-due family helping us deposit rainwear and ushering us into a delightful, cosy little dining room. Her husband, Hideji, a former railway man still sporting his official hat, was busy in the kitchen from which tantalising smells wafted.  Soon, he appeared, grinning widely, and carefully served each of us a perfect fruit bread role followed by some sensational “Japanese Pizza” as he announced it, laughing infectiously as he did so.

To accompany it, a cup of tea. But not just any cup of tea. With suitable ceremony, Mitsuko placed the pot in front of me along accompanied by a small egg timer. “One minute,” she said. “Not before.” When the last grain of coloured sand had fallen I was allowed to pour it into the cup and it was … perfect.

When the meal was over (pizza after pizza kept appearing) it was time for some entertainment. First Hideji on his old Shamisen and Mitsuko on the mouth organ played a couple of traditional songs then Hideji encouraged us in a sing-song, their little dog Fuku moving from guest to guest liberally distributing affection. All thoughts of the rain, and hills still to climb, evaporated.

For anyone travelling in this area of Japan (close to the town of Kiso-Fukushima and on the Nakasendo Trail) Poppoya is a must visit. As well as the food, entertainment and warm welcome, Mitsuko also produces some of the most beautiful handicrafts, including some handbags made out of exquisite old printed kimono fabric. As well as a collection of rail memorabilia, Hideji has several small model railway layouts and a large external one which loops through their garden. 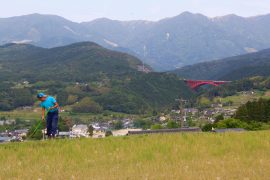 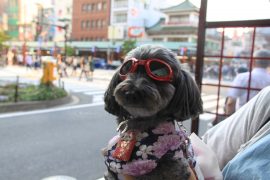