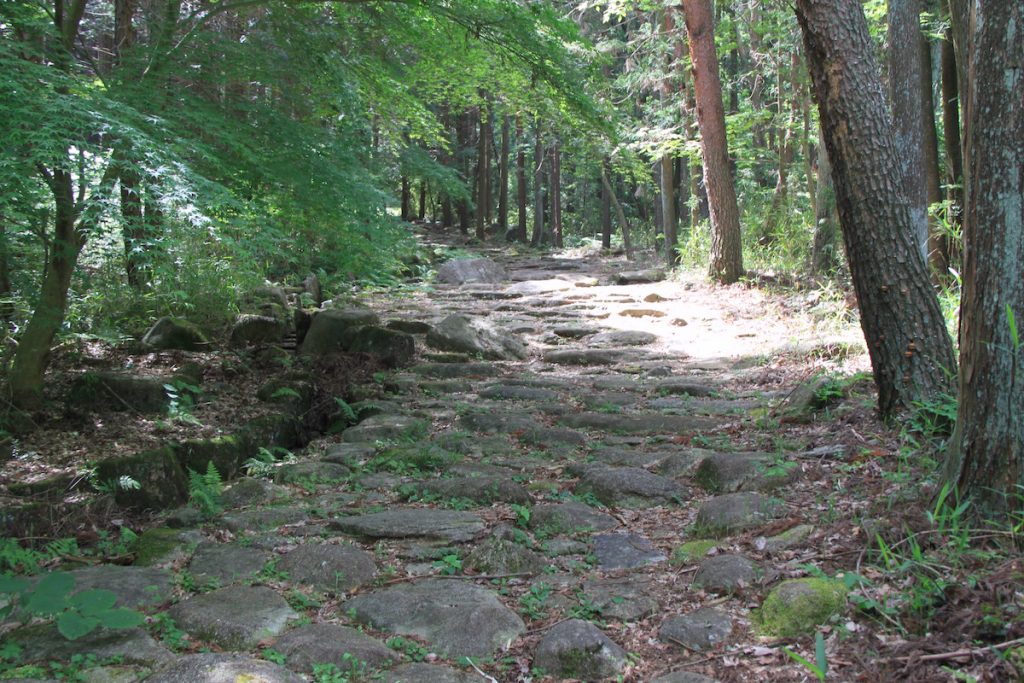 The day we set off to walk Japan’s historic Nakasendo Way from Kyoto to Edo (now modern Tokyo) the weather seemed as full of optimism as we were. There were ten of us on the Walk Japan  trek, four Americans, three Australians, two Singaporeans and our guide, an American who has lived for decades in Japan. However much we had researched it was, for the majority, an adventure into an unknown world. 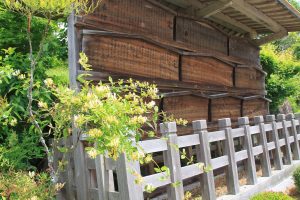 passable road of more than 540kms between Kyoto (the residence of the Japanese emperors until 1869) and Edo, which become the capital during the Meiji Restoration.  It would take the challenging inland route over mountainous passes and grassy valleys, through dense forests, past tumultuous waterfalls and over fast flowing rivers. The warlords were ordered to put in place bridges and ishidatami stone paving. They were to install sign-posts and way markers indicating the distances between the important series of 69 post-town networks where the Shoguns and samurai, merchants and porters, ordinary travellers and locals could rest in safety, get meals and enjoy the tea houses. Each post-town was to have a kosatsuba (notice board, pic above) setting out in great detail the rules of the road, and the town.

We are less ambitious, modern development seeing parts of the route virtually obliterated. Our Nakasendo Way stretches just under 140kms through some of the country’s most stunning countryside and impeccably restored and maintained post towns. We will stay almost exclusively in the traditional wooden inns where, frequently, our hosts’ families had owned and lived in for centuries. We would, for ten days, be breathing Japan’s colourful and lively history. 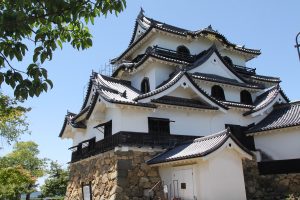 The journey officially starts on Kyoto’s Sanjo-ohashi bridge, with its charming Nakasendo Way statue (above), not far from the famed Gion district. Then we set off by train for Hikone Castle Donjon (left) a towering structure, listed as a National Treasure, has a spectacular position looking out over the shores of Lake Biwa glistening in the sunshine far below.  The castle is particularly valued as it is  in largely original condition without having been destroyed and restored. Part of it, notably the three-storey keep is particularly notable for using multiple styles of architecture. It also has a large entry ramp designed to be easily destroyed in case of attack. The lavish Genkyuen Garden is just outside the picturesque inner moat. 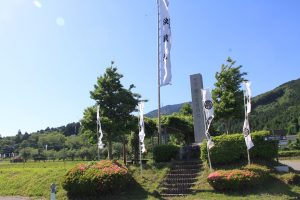 one of the most important battles in Japanese history heralding the start of the 270 year long Tokugawa dynasty and Edo period. After dropping off our packs at the Masuya Inn which has been in operation for more than 1000 years, we head off along the floor of a wide green valley with a checkerboard of neat rice fields, past rows of fluttering flags bearing the distinctive insignia of the various clans and shogun who took part in the battle. There are several vantage points from which the opposing leaders planned, and watched the battle unfold. 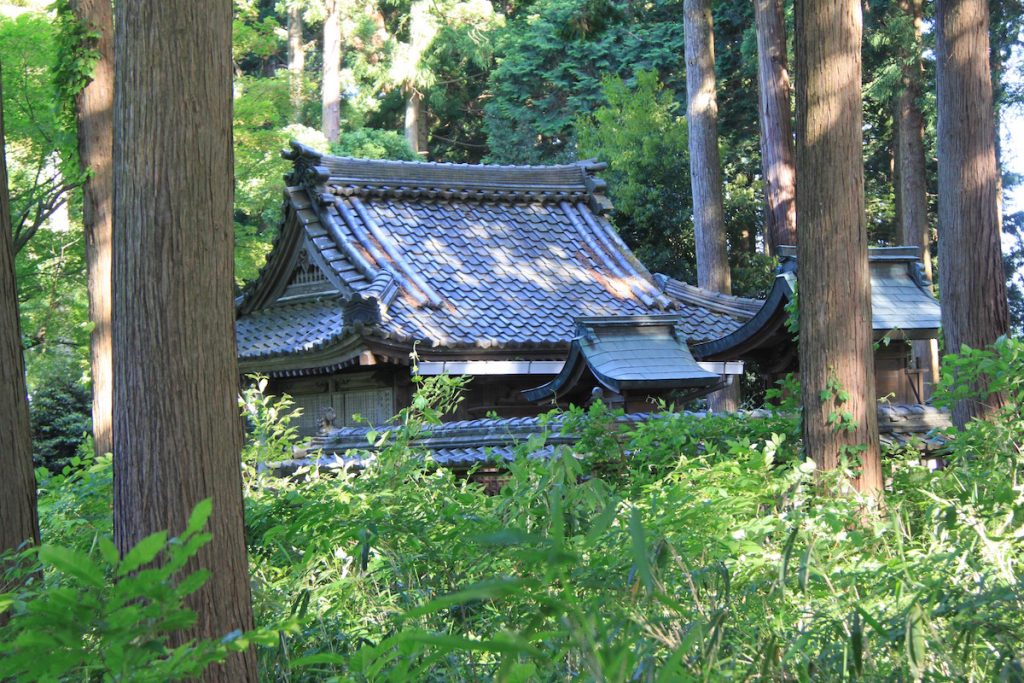 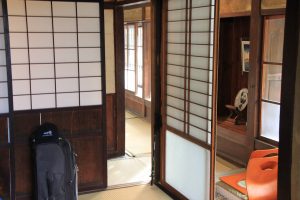 and obi which we wear for mealtimes. And, bliss, there is time for a “rostered” visit to the bathroom to both clean ourselves (meticulously) then slip into the very welcome steaming cedar wood bath. The aches of the day disappear. We practice shuffling rather inelegantly in the yukata and slippers trying to remember the golden rules of footwear in Japan. In the morning, after a beautifully presented breakfast, we take a series of local trains to Mitake where we will then our first long walk along the actual Nakasendo. Each step seems to conjour up the past.

There are several sections still made up of the original ishidatami, paving stones designed to 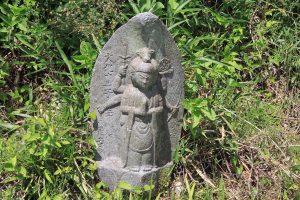 provide stability against erosion and weathering of the path. It seems like barely a corner is taken without a shrine of some sort,  some standing alone– like the one (left) seeing the deity’s help in ensuring the quick passing of the pack horses which died along the Way – others in small niches in the stone wall. We now easily spot the regular Nakasendo Way signs with what for us are now the distinctive Japanese characters. With the clearly marked route and the rule of waiting for everyone at any split in the path, our group is able to spread out more, walking at a rate comfortable to the individual. Several times, this means you can find yourself walking blissfully alone through tightly woven forests that present a dense wood wall, mossy banks shimmering emerald green when the sunshine breaks through the canopy. 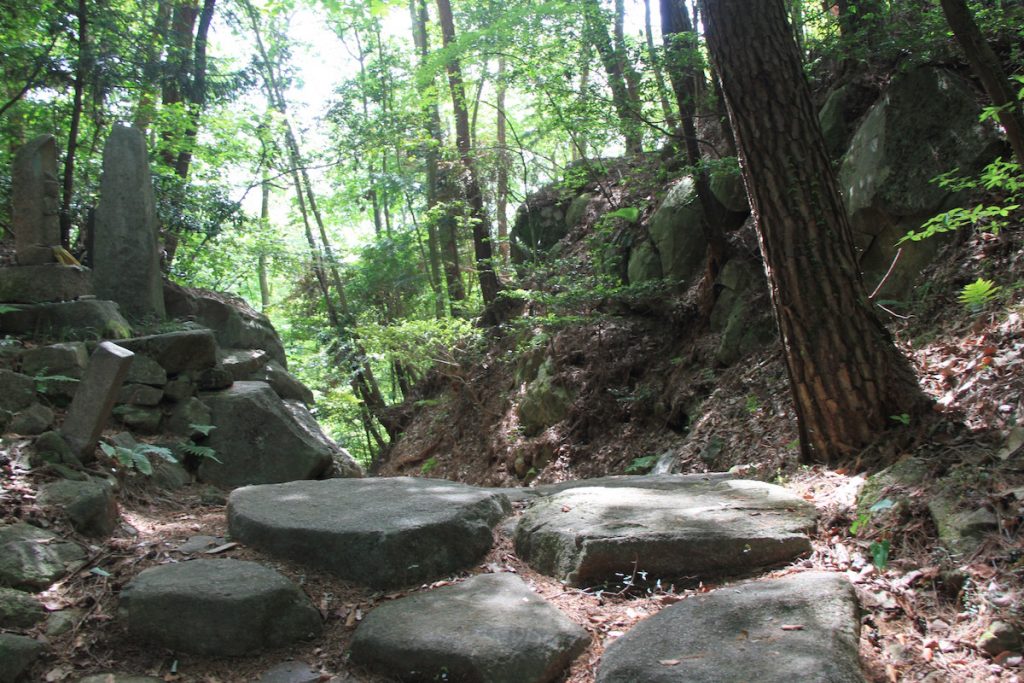 And finally, after a diversion to a modern-day teahouse with its elegantly laid out garden, we arrive at Hosokute post-town and the 17thCentury Daikokuya Inn, our hotel for the night. Here the owner, a noted chef, created a meal as beautiful to look at, as it was delicious to eat, careful layers of taste and texture. 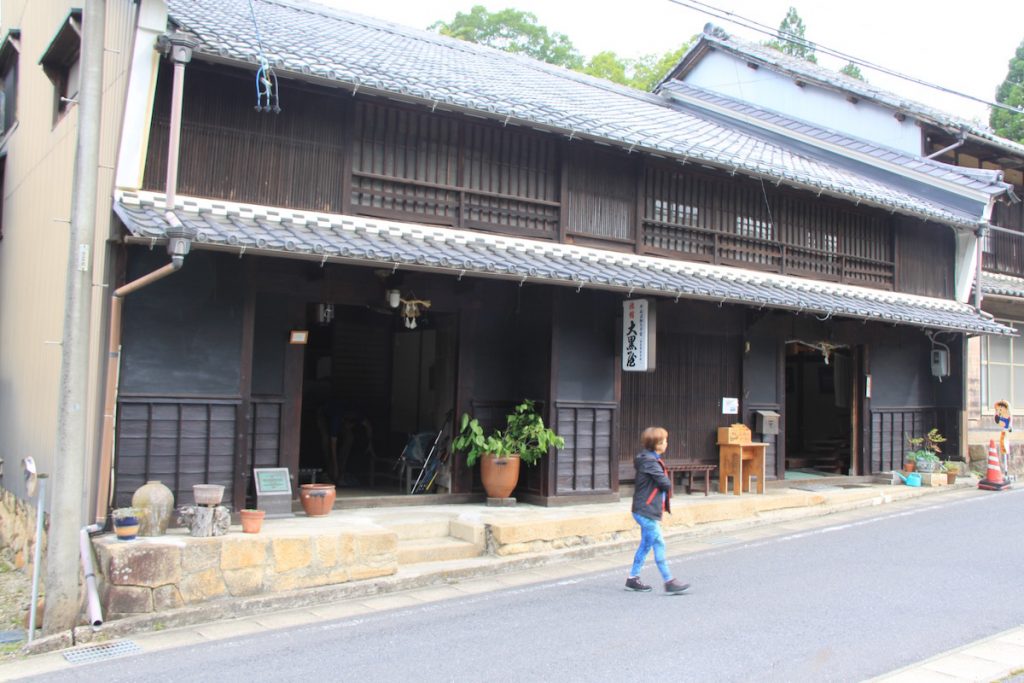 The next day birds wake me early from my incredibly comfortable futon; I’m reserving judgment
on the buckwheat pillow though. Breakfast is another delicious assortment of local delicacies 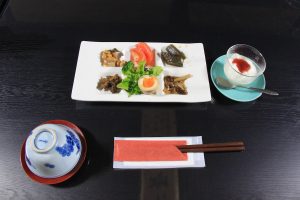 , hand made, artistically presented and cooked to perfection.To re-join the Nakasendo we have only to descend the hotel’s few entry steps and we are again on our way, now heading towards along a ridge-top route dating from the 8thcentury. In the distance we can see the far-off Kiso Mountains. It’s a Saturday and we spend the first part of our walk avoiding the stream of sports cars making their way to a nearby racing circuit. But we soon turn off and are again wandering the narrow lanes, peering into meticulously crafted and maintained gardens some laid out in traditional Japanese style others given over to flourishing large vegetable patches. There are flowers everywhere notably the waves of iris at the Benzaiten pond (shades of a Claude Monet painting). 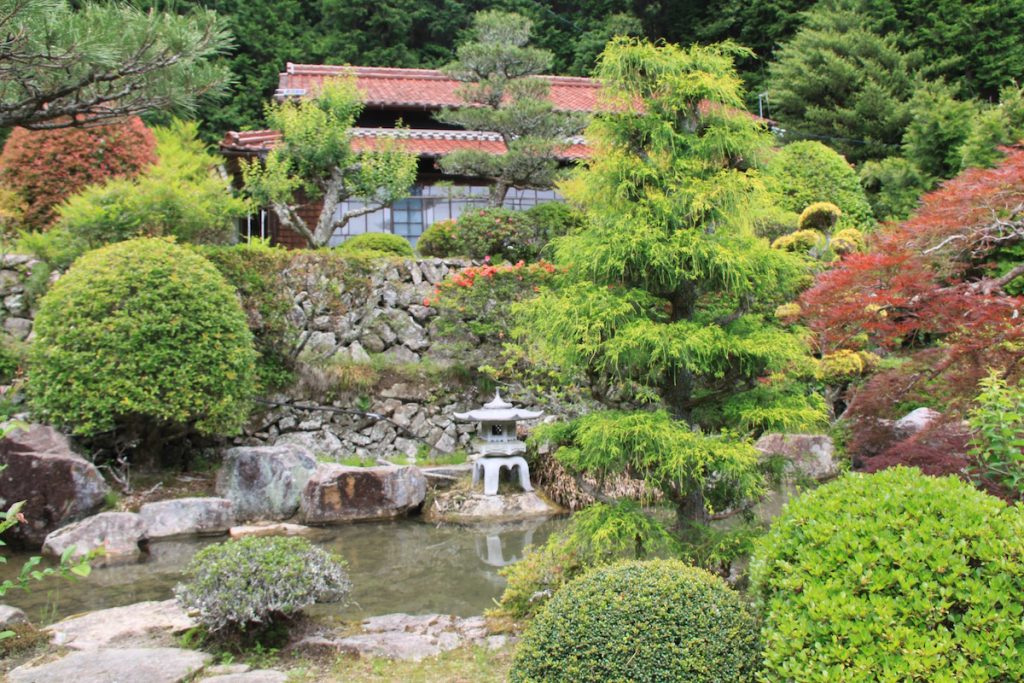 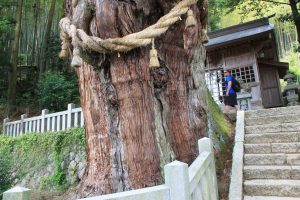 When we descend into Okute, the 47thoriginal post town, we come across a  towering Shrine (left) created, literally, around a 1300 year old cedar tree. Today, Okute is a charming sleepy little hamlet with a tiny but friendly supermarket, and a charming family museum where the owners have laid out a replica of the local buildings that used to line the Nakasendo. It’s another example of the small businesses that are beginning to grow up as the trail’s fame grows.

Then there is a gradual rise as we start the ascent into the forest. The day is again to be marked by a series of ups and downs, some more testing than others.This was a part of the Nakasendo that had been forgotten for decades but lovingly restored. We see our first sign warning of bears. He looks pretty ferocious but we are told that bears much prefer to avoid human contact. For most of the day we are walking an undulating route along the ridge tops that guarantees a constant supply of up, up, up followed by steep down, down, down.  We see no-one except two lone walkers, their bear bells tinkling as they pass, bowing and exchanging greetings. 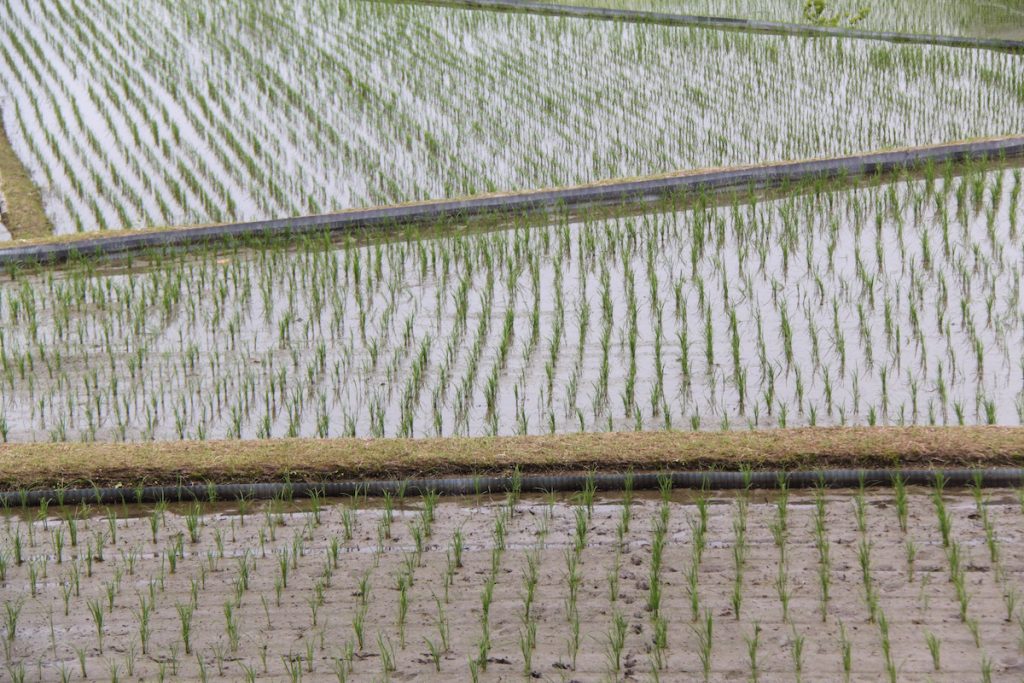 The dense forest on either side occasionally opens up to provide breath-taking views to the mountain range in the distance.  Although in its hey day there was little land cultivated today, smallholdings, gardens, and tiered rice paddies flourish making use of every metre of spare land. And several times we pass small sloping fields “planted” with neat rows of solar energy panels. 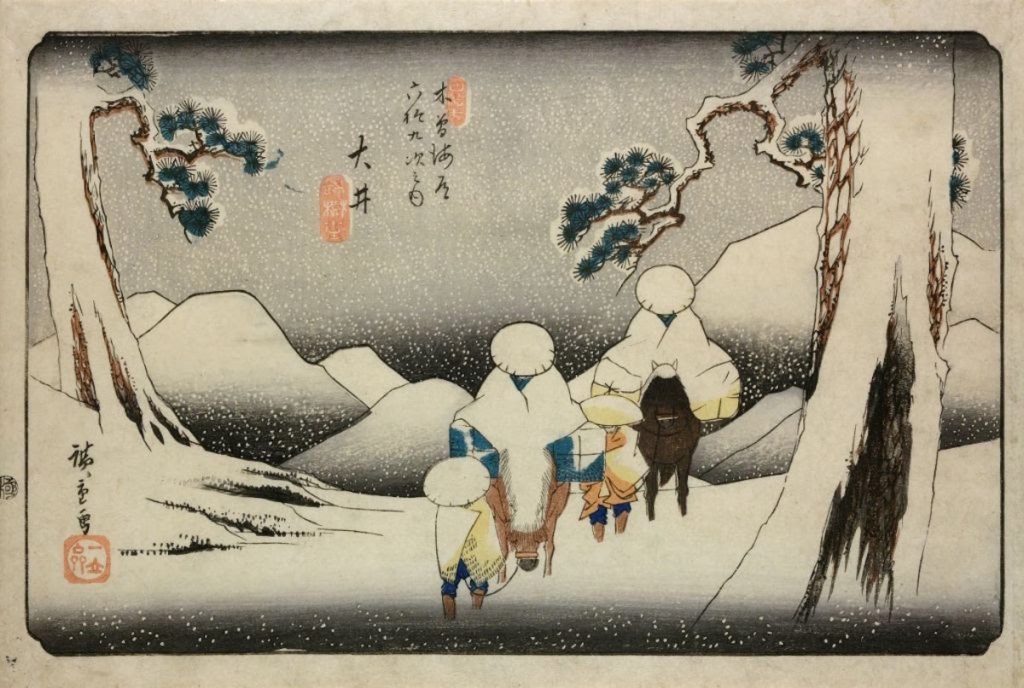 The last descent into Ena (then known as Oi) is what feels like the steepest so far and we emerge from the forest to the roar of traffic alongside the main highway. We take to the tarmac,

walking into the city, to our last stop for the day, the Hiroshige Print Museum. This is the home of the most famous work by master painter and printer Ando Hiroshige series Sixty-nine stations of the Kisokaido about the post town route between Edo and Kyoto. There are variations of Hiroshige’s distinctive wood print all around Oi, which was one of his Sixty-Nine stations, which we consistently see as we walk – as a decorative bannister on the bridge, a monolithic stone etching and, even, manhole covers (right).

Our hotel tonight is the Route Inn Ena, a classic “businessman’s hotel”. But what it lacks in atmosphere and charm, it makes up for in laundry facilities and for those not yet taken with the futon, beds with legs.

Part 2 of the walking the Nakasendo Way to come. 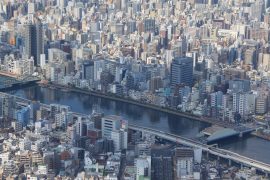 A bird’s eye view of Tokyo
Crime File: The Woman in the Window by A.J.Finn and Sign by Colin Dray
Navigate
Follow