It is a spectacularly sunny Sydney day. Centennial Park, one of the city’s most loved green havens, is literally sparkling after the recent deluge. As usual there is a action everywhere. Serious joggers lap the novice keep-fitters; kids on bikes wobble along with increasing confidence. A flock of schoolgirls from a local school suddenly sweep past on a lunch-time run, matching pristine white shirts. Two women ride by on horses prancing in haughty disdain. A small bus disgorges a group of Chinese instantly fascinated by the gaggle of large, plump geese feasting from worms plucked from the still moist lawns. They push closer until a large white goose turns and races at them wings outstretched, honking noisily. Laughing, the tourists retreat.

On the park benches people read newspapers, eat their sandwiches or just watch the

world go by. I walk down Dickens Road, past the beautiful lakes where dozens of black swans glide gracefully as coots and smaller waterfowl zip between them like speedboats. Busy, busy. Several Pelicans, the comedians of the waterbird world, sidle up to anyone who looks like they might have food. Turn left at the little mobile tea shop, past Willow Pond and the flying fox colonies. And there is the end of my quest, the Labyrinth.

There are a handful of people sitting on the grass looking at the huge pale circle marked with its intricate curving pattern.  The official guide to walking the labyrinth points out there is no right or wrong way to go about it but points out the three stages:

An 30 something woman, looking slightly self-conscious, is slowly making her way

around, head down, each step deliberate. A few, like me, hold back, watching. I pace its circumference and note the elegant work of the local craftsmen who created it using methods that have changed little over the past centuries. Each stone perfect.

By the time I enter there are about four people walking, including an elderly couple who touch hands each time they pass each other. At first, focus is very much on simply staying within the set pathway which is quite narrow, with tight bends. I find myself thinking of  how it is taking me on this discursive route to the centre but don’t want to look up and see. It is the journey not the arrival as I heard one of the seated bystanders tell the young man with her. A woman with a dog on a lead enters. A spaniel. This

becomes my focus.  I am worried I am going to accidentally knock into it as it trots alongside its owner. Would it trot along happily in front, or beside her? Would it stay on the path? I switch back to thinking about each footstep, and the sound of the flying foxes which I always like, and suddenly I am in the centre. Smiling. Which I hoped was not to reflect success but contentment. I don’t think I’ll be sure until I come back next time.

So why walk? Walking a labyrinth has been generally been acknowledged as having therapeutic and medical benefits. According to supporters evidence suggests that a labyrinth walk is a ‘right brain exercise‘ which can activate the intuitive, imaginative and creative side of your brain which has both a calming and meditative effect. This has resulted in more than 200 labyrinths being built in American hospitals as well as one at the Children’s Hospital at Westmead, Sydney. Centennial Park Labyrinth is the first public stone labyrinth in Sydney, created out of sandstone and based on the historic 13th Century one in Chartres Cathedral in France.  After the $500,000 cost was raised by public donations, it was  opened in September last year at a ceremony attended by eleven wisdom keepers from a wide variety of faiths and beliefs.

Aunty Ali Golding, Aboriginal Elder of the Biripi Nation explained its importance to her: “Walking home to country is a connection our people have always had with Mother Earth. Our culture is defined by the closeness of family circles and staying connected to the people within it. The labyrinth invites and welcomes people to walk the path together – it calls them to the land in oneness.” You can read here what of the other wisdom keepers said. 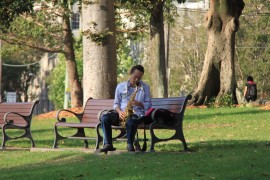 Pic of the day: The man with the saxophone, Alfred Park, Sydney
Celebrating the 800th anniversary of the Magna Carta 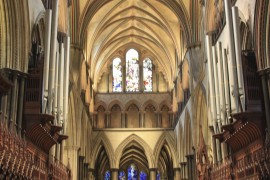