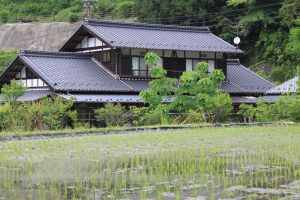 Morning, and it seems strange to wake in a bed and look out to a modern city streetscape. Breakfast is tasty but workmanlike. And although the hotel staff was helpful and friendly, I find I already miss being waved on our way, as if by old friends, by the owners of the small Ryokans we had stayed at before. Still, we are soon in the city’s back streets, pausing to see the large impressive single storey building that was the lodging house for any nobility travelling the Nakasendo although only the huge entry doors are original, the rest of the building rebuilt after a devastating fire. On the outskirts of town is a large ancient Zen temple, a lone farmer tending his rice fields, narrow streets, lined with large houses and beautifully maintained gardens, carefully topiary and frequent flashes of brilliant colour. A young boy being pushed in a wheelbarrow by his grandfather calls out a greeting.

There’s a rhythm to the days now, not a sameness, far from it.  But thoughts no longer seem on 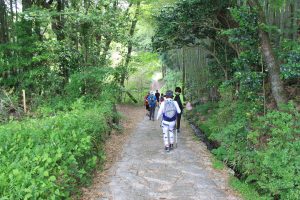 distances to be walked but solely the experiences along the way. The individual composition of the group is more discernable. There are those who walk fast and those who tend to linger longer. Some who nimbly stride up the most vertiginous incline yet descend stiffly, made tentative by fretful knees. Some enjoy conversation as they walk. Others drift more easily into silence.We pass the Koubou Taishi, built after the great earthquake disaster in the Kanto area in 1923. Then, on a risen plinth, a collection of individual statues including the Nyoirin-Kannon which some farmers are said to believe is a Buddhist statue which cures a decayed tooth, or the Zibo-Kannon, or affectionate mother’s Kanon which depicts a woman cradling her young child. 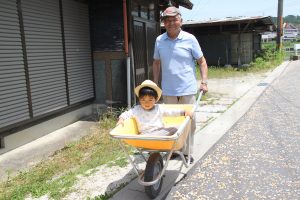 We spot an ancient Kono Ichirizuka, not just the more common original stone distance markers. These are the large earth mounds built during the Edo period every “ri” (approximately 2.44 miles) and on which a tree was planted. They were used not just to guide the way, but for porters to set charges based on distance travelled. Sadly few have survived the journey of time. When we arrive at the edge of Ochiai (44thof the 69 post towns) we are rewarded with a dramatic views of the modern city of Nakatsuga, in Gifu prefecture, which absorbed it. The city spread out below is framed by the far off range of mountains and closer, an impressive large modern bright red bridge slung across a ravine. After lunch, we delve further and further into the deep woodland where, despite the dense canopy, the afternoon sun strobes the pathway and forest floor.

The paved route, said to be one of the best-preserved sections of the Nakasendo, has re- 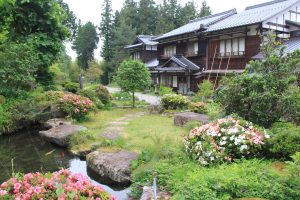 appeared. Wider this time, but also steep. One of the steepest inclines so far. But it turns out to be worth every aching step. The forest suddenly opens out and there is the dark elegance of Shinchaya, or New Tea House, a large, impressive building, steeped in history with a captivating ornamental garden, wrapped around a koi carp pool, covering the then disappearing into the deep forest behind.  Later, bathed and yukuta clad, we sat enjoying an end of day drink before dinner. Perfect.In the morning, after a solid night’s sleep cocooned on a plumptious futon, followed by generous, multi layered breakfast, we left. Upwards again, along a quiet country road that winds its way through glorious countryside framed by mountain ranges, past layers of rice paddies, charming homes, most ancient but some newer though build to traditional designs and comfortable in their setting. 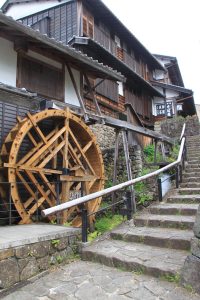 Our first destination is the post town of Magome, which is laid out on either side of a narrow paved pedestrian pathway. Amongst the Japanese, Magome is best known as the birthplace of the novelist Shimazaki Toson, famous for his book Before the Dawn about late 19thCentury Japan’s struggle to come to terms with the encroaching world. The one drawback of Magome’s picture perfect appearance, and its easy access by highway, is that before long the narrow paved pathway is packed with tourists brandishing selfie-sticks, peace signs and ice creams. Leaving the town past the rather weather-worn kosatsubanotice board, one of only a few still standing along the Nakasendo. Soon, following the Magome Tome mountain path we are free of the hoards, the forest ours again – and of course the bears’ although, despite the frequent warning signs, we haven’t seen a whisker. Although we did meet a badger.

It seems that every stretch reveals treasures; a traditional building seemingly abandoned and 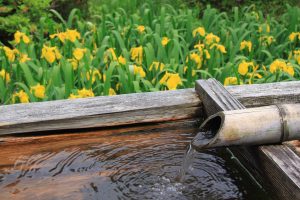 being slowly consumed by the forest; bamboo water pipe emptying softly into a wooden trough, backed by a bank of yellow iris; haphazard rows of small shrines and markers walls green with lichen and moss; bushes and trees enveloped in explosions of white and pink blossoms.  We are offered a free cup of tea by the effervescent owner of a small woodland cafe who proudly shows us a newspaper clipping of him hosting Joanna Lumley during her filming of a series about Japan. 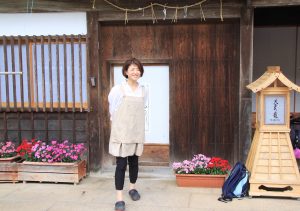 We descend through dense woodland cross the highway, before disappearing again into the forest. We stop for pictures at a stunning series of waterfalls. A brief pause at the Rest in Peace pagoda dedicated to the black cattle, which carried loads up and down the vertiginous terrain. A sign notes it is the only such one on the Nakasendo, stating pointedly that “most are rest-in-peace pagodas to the horses.”) There is time to visit Tsumago, considered one of the best preserved of all the post towns, before halting for the night. The village has worked hard to preserve its traditional look and feel. None of the intrusions of modern life like telephone lines, street lighting, just an overpowering feeling of the past. We are staying at the Maruya, a small inn in the nearby hamlet of O-tsumago. High on the menu is fish caught in the local streams. And there is the added pleasure of after dinner, visiting the village onsen where the thermal spring provides a happy soak before bed. 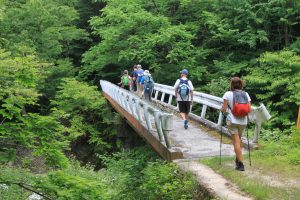 We wake hardly able to believe that it is already Day Seven. The weather is cloudy. A little ominous. The prudent put on wet weather gear hoping that, like a talisman, it will prevent any precipitation and once more we are waved off by the owners. It works. Our route now follows the old highway to Nagiso, past tiny rural communities and vast green patchworks of fields then, as we near Nagiso, the impressive a footbridge over the Kiso River. The afternoon will be tough, we’ve been warned. Avoiding the easier riverside route, which has a highway running alongside it, we’re taking an alternative route through the Ne-noue 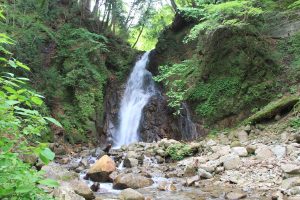 Pass. It’s steep but with spectacular views. Giant ferns wave their feathery leaves as we wind our way and there are flashes of red where an almost hidden statue has been respectfully clothed.

Then, sooner than we had thought, we emerge from the forest. There is an hour’s wait before we catch the train that will take us to Kiso-Fukushima where we are spending the night. We have walked 24kms. It’s warm. And sunny. And there’s a drinks shop where we can buy beers and some snacks and relax looking out on to the beautiful views of the Japan Alps in the distance. 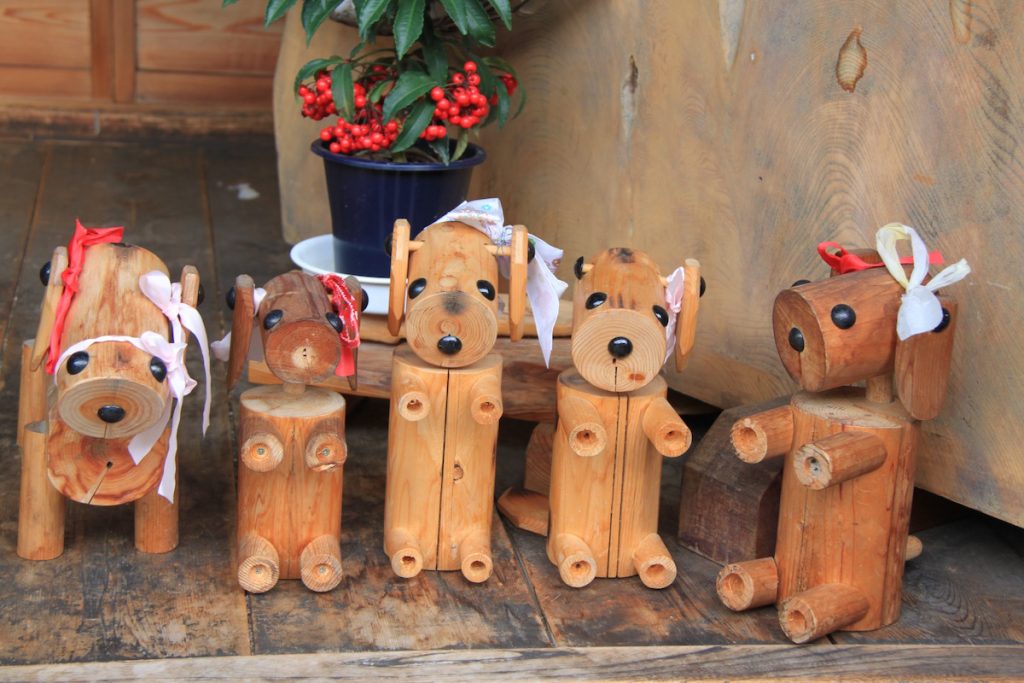 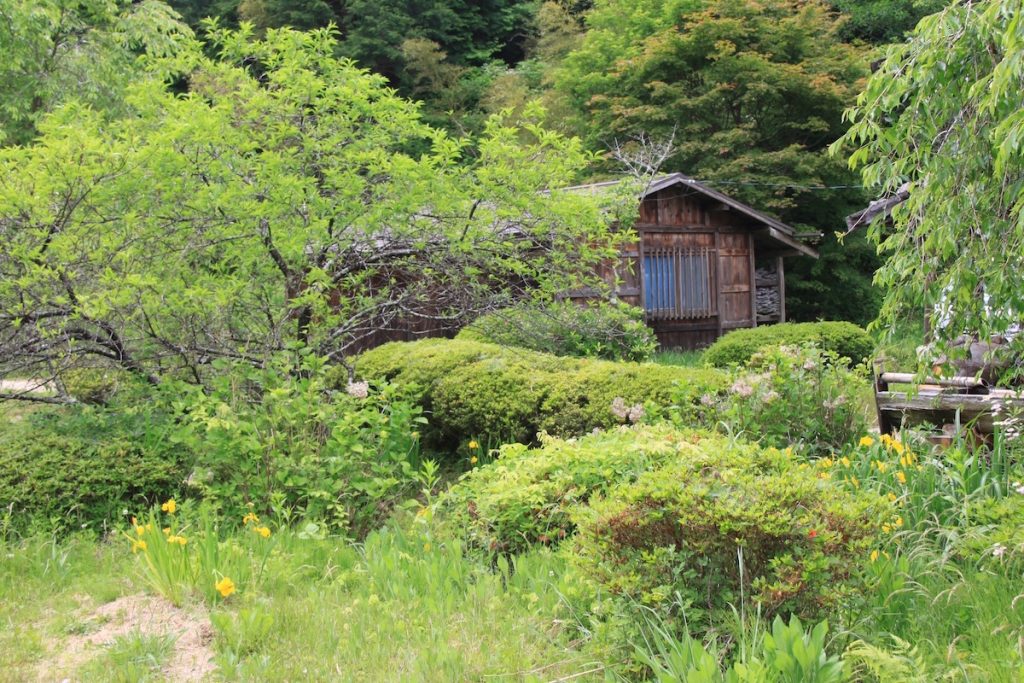 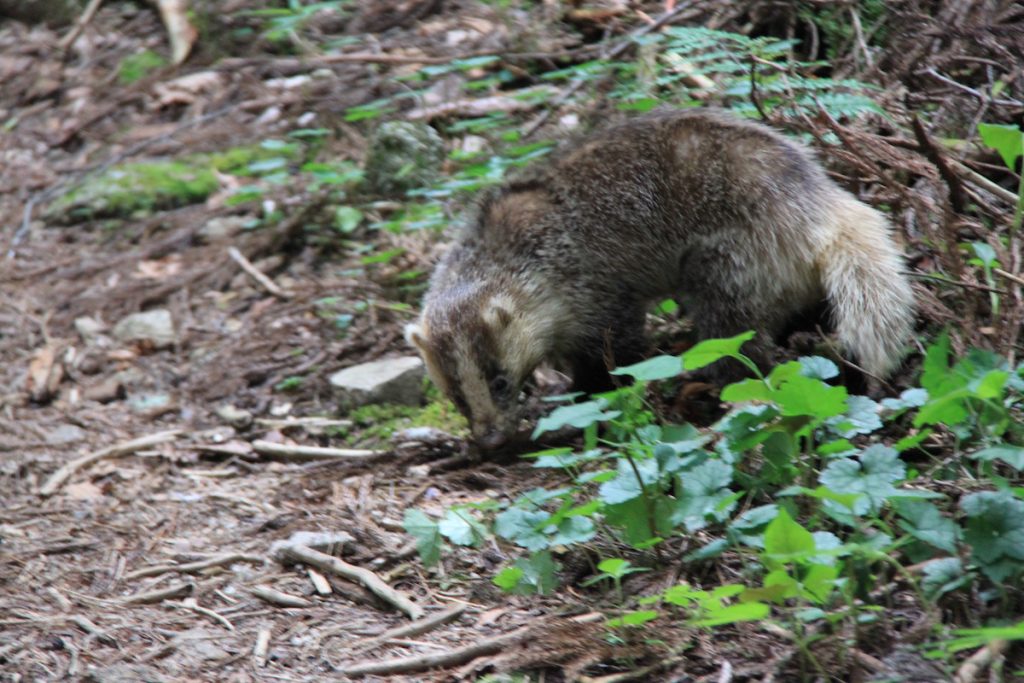 Crime File: The Woman in the Window by A.J.Finn and Sign by Colin Dray
Book Review: Inside The Devil’s Half Mile by Paddy Hirsch
Navigate
Follow