For the fourth year in a row uber chef Grant Achatz’s Alinea restaurant in Chicago tops Elite Traveler‘s Top 100 Restaurants in the World 2015 list for dishes that the magazine said “surprise and confound the senses, from sweetbread nuggets eaten from a takeout box with cinnamon bark chopsticks to southern grits perfumed with scents of manchego, ham, truffles and sherry”. In all, restaurants from 23 countries make it into the Top 100 including celebrity chefs Heston Blumenthal, who gets two mentions on the list with his The Fat Duck coming in at #5 and Dinner at number 25, Raymond Blanc’s Le Manoir aux Quat’Saisons is #61 and Michel Roux Jnr’s Le Gavroche at #93. Possibly  the most beautiful setting for a restaurant is the opulent  Falaknuma Palace the former residence of the Nizam of Hyderabad, which just made it, at #100.

“There’s always that underlying understanding that anything less than number one is not what we want to be,” Grant Achatz told  the magazine. “… I think that when we speak of accolades and goals you’ve achieved, it’s fantastic and it’s wonderful, but the real challenge comes in holding onto those and having longevity.” 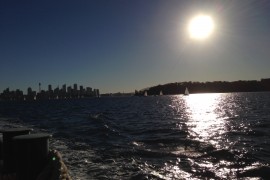