sparked the kind of outspoken commentary we’ve come to expect. Probably the best came from experienced architecture critic Elizabeth Farrelly, writing in one of Sydney’s two morning papers, who dubbed it “ the Kim Kardashian of contemporary architecture: all curves, no content.” It’s an amusing comparison that makes for great illustrations and headlines. Others have called it “bad Gaudi”, others again a “squashed paper bag” which clearly sat quite comfortably with Governor General Peter Cosgrove who referred to it as “the most beautiful squashed paper bag” at the official opening.

In what was a fairly detailed critique lengthy Farrelly then summed up: “Absent content, then, it’s all on the visuals. Are they good? Here’s my take. As a distant object, it’s engaging, eminently instagrammable. But up close, where it counts, it’s clunky and surprisingly hostile. “Any building that cares so much for forcing bricks to contradict nature that it ties each individually to its frame, and so little for its users that its main street presence offers a soulless concrete space furnished by a low wall, outlet fan outlet and utility door suggests that KK is not the only one unclothed.”

Today, I wandered down to see what all the fuss is about. The building, officially the Dr

Chau Chak Wing Building, is part of the business school of the UTS (University of Technology Sydney) one of Australia’s younger universities with a sprawling patchwork campus right in the city centre. It’s actually tucked away down a relatively quiet street in Ultimo just a hop and skip from tourist hang-outs like Paddy’s Market, China Town and Darling Harbour. Dr Chau Chak Wing is a billionaire Australian-Chinese property businessman and his donation is an important part of the UTS’s $A1.2billion campus revamp plan.

Gehry, the 85-year old Canadian-born, American architect, in Sydney for the opening, said that he had been inspired by the concept of a tree house, describing the structure as “a growing learning organism with many branches of thought, some robust and some ephemeral and delicate”. Whilst the interior was not open to visitors (although there are some official guided tours this weekend) there were plenty of people who had come down for a sticky beak and photographs against a gloriously blue Sydney sky. I asked one of the University security men what seemed to be the general reaction of the public so far. “Some really like it, some don’t think it’s so great,” he said. “But I guess it’s good people are talking about it.” Then, slightly conspiratorially added that he wasn’t sure it’s the building he’d have designed if he had $A180 million to spare.

I liked it. You don’t have to be an architecture expert or a greengrocer to get the analogy of the squashed paper bag. But I’m still wondering over Kim Kardashian’s bottom. 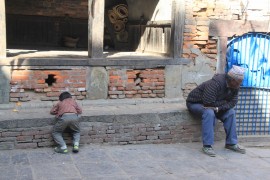