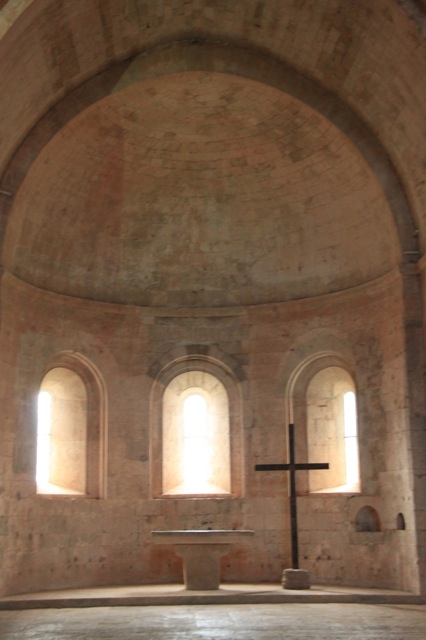 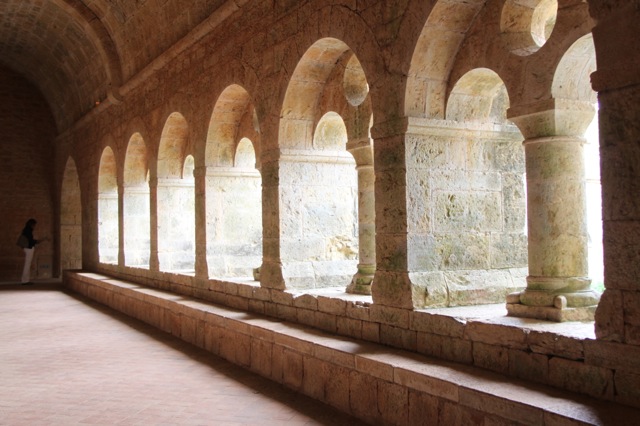 and finally to the actual Abbey proper. The whole complex was constructed at the same time fulfilling the Rule of St Benedict that all the areas for normal work and functions should be an autonomous city. The result is that Le Thoronet has a simple but very elegant and functional flow specifically attuned to the monks’ life. The laymen, who managed the business of the Abbey, were not allowed to enter but had their own designated area: important to, but separate from, the monks.

The church has no central doorway but two modest side doors each of which leads to an aisle; laymen would sit on the left and the monks on the right. Inside, the plain, high, 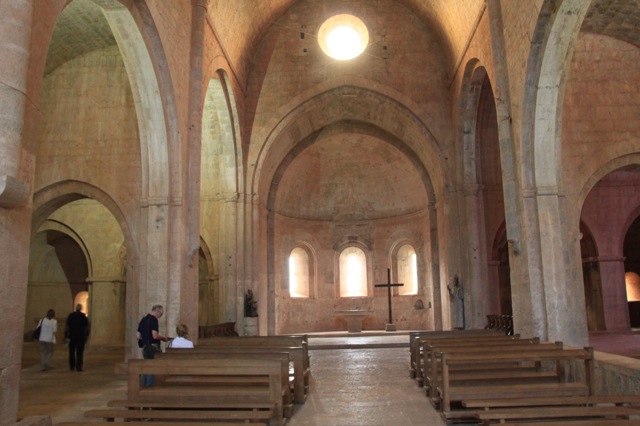 barrel vault over the main nave, the walls coloured and textured only by the natural tones of the stone, and the perfect symmetry of the arches, complement each other absolutely to create a stark beauty. The stained glass windows (replicas of the originals, added in the mid 1930s) are pleasing in their practical modesty. Such is the power of the building’s hold on history that you have only to close your eyes to imagine the glory of the monks’ voices lifted in song. Musical concerts are held occasionally at Le Thoronet and the acoustics are said to be magical

The cloisters, four barrel-vaulted walkways, were at the heart of the monastery joining 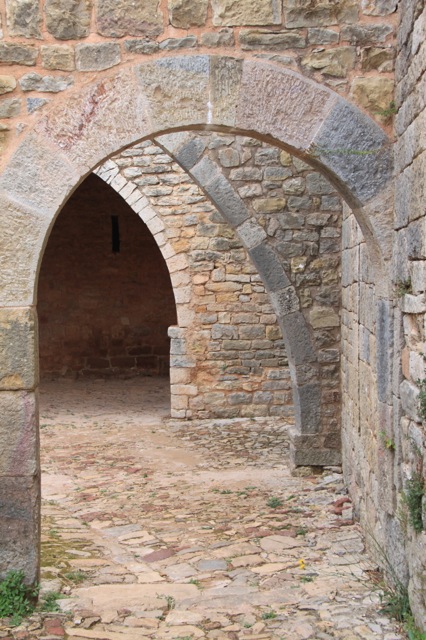 the church to the buildings where the monks worked and slept. The day we visited the Abbey was overcast, the sun only occasionally appearing, yet each slight change of the light presented subtle shifts in the geometric shadows cast by the simple arches and columns. Off to the side, is the small armarium, or library, which were kept to assist the monks in their meditation, and the chapter house, where the monks each morning to listen to a read a chapter of St Benedict’s Rules. Leading off, and the passageway between the cloisters and the garden, is the parlour, the only place they were allowed to talk and where they divided up the day’s tasks. Upstairs was the simple dormitory where the monks slept.

Other buildings in the abbey complex are the lay brothers’ home which includes an eating area downstairs and dormitory above, the large cellar where the monks made wine and 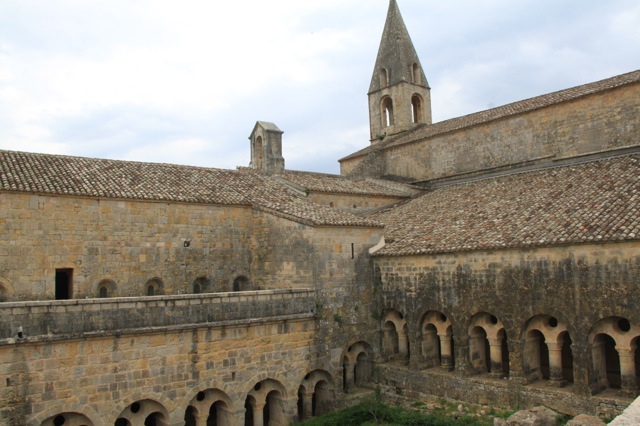 olive oil and the monks’ modest cemetery. There is also a beautiful avenue of chestnut trees laid down by an early Abbott. Several fountains were added in the 18th Century helping maintain the air of contemplative calm. For several centuries Le Thoronet was a dominant Abbey in Christendom, but accumulative events like the plague, which decimated parts of Provence, ecclesiastical power-struggles and damaging rifts, and a rapidly changing view of religion, what it stood for and how it should be represented, saw its fortunes fade until, by 1785, the community 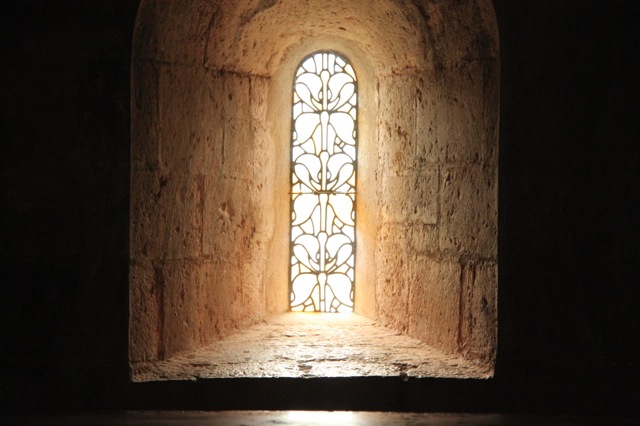 was declared bankrupt and the Abbey deconsecrated. Placed under the King’s protection, it was originally rented out to a number of individuals before being virtually abandoned. However, its significance was recognised when it was included in the first list of historical monuments drawn up by France in the mid-1800s and it has been the subject of periods of on-going restoration ever since. The beauty and honesty of the site today is testimony to the weight that is placed on the site as part of the country’s heritage.

Despite the extensive work that has already been done, mystery still surrounds several elements of the Abbey. Although it has been established that the site was occupied long before the Cistercians, with some detail of 5th or 6th century structures, the exact detail is unknown and scarce remnants unearthed. 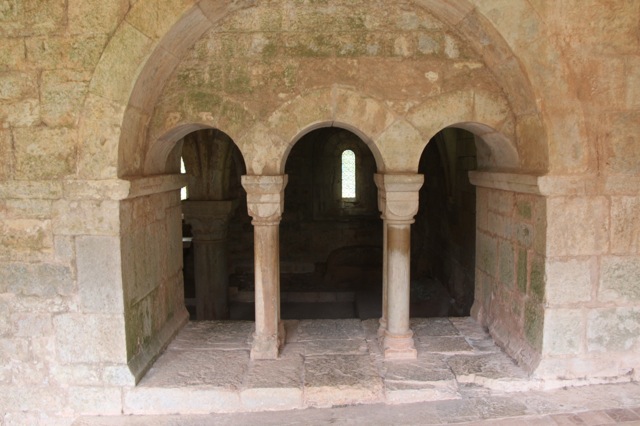 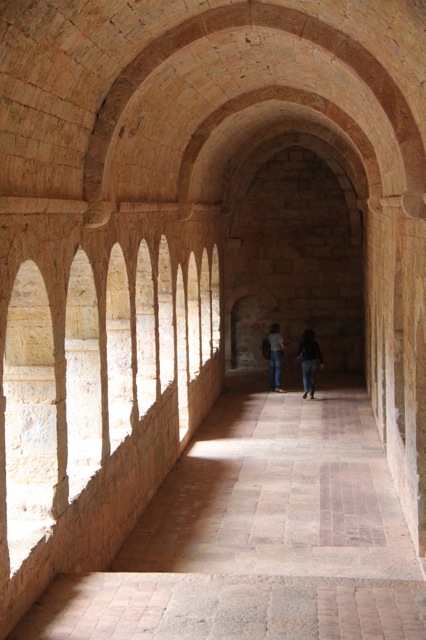 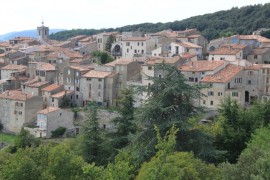 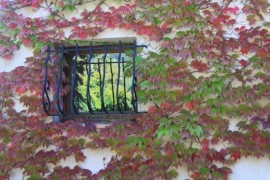