The water is menacing. So dark that in places it appears black a sharp contrast to the dazzling blue sky with white clouds scudding hurriedly by. This is Saltstraumen, near the Norwegian town of Bodo, slightly south-east of the Arctic Circle and the strongest current in the world. Water speeds have been known to reach more than 40kms. But today, the current looks 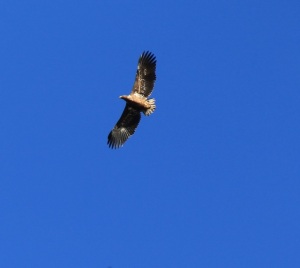 almost playful with its elegant whirlpools and rows of jagged ruffles. Like teeth. The Saltstraumen is where the Skjerstadfjorden becomes to Saltfjorden. Dressed in our all-in-one protective suits and sitting astride the high powered rib-boat we ride backwards and forth through the channel. But the river gods are in benign mood today. Occasionally we can feel just barest tug of the tide, just making sure we know who is in control. But nothing like the 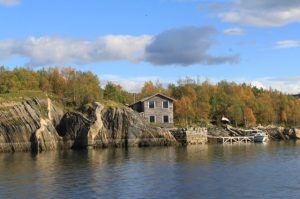 maelstrom that it has been known to unleash thwarting the most powerful of man’s machines. Nearby, as we investigate the myriad of islands that populate this pristine haven, a stately sea eagle, the white-tailed eagle, swoops lazy circles above us, riding the thermals around its craggy home. Unperturbed by its fluorescent visitors. Close by, another sits on a rocky perch on a bleak promontory, surrounded by sheer cliffs. Blending in perfectly to its surroundings. Watching. Waiting for us to leave. 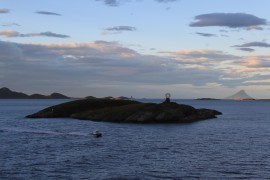 Crossing the Line, the Arctic Circle, 66 degrees, 33′ North
Beauty all around, just outside Finnsnes heading for Tromso, Norway 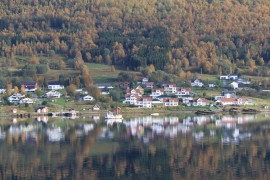