Urke is one of those Norwegian fjord villages that makes your heart flutter with pleasure when you see it. It looks out over towering walls of jagged black granite frame water so clear it would reflect your soul if you hung over the ship rail far enough.

Fifty-three people live in the village all in traditional homes which looks out over sublime views of Hjorundfjord which is about as unspoiled environment as you are going to find. They have their own supply of hydro-power, there is fish from the fjord but there is also a large sustainable fish farming. They grow their own vegetables and raise livestock, particularly sheep. All of which, together with tourists from the Fjord cruise ships, provides their livelihood.

the beautiful, historic Union Hotel. The rooms look as comfortable and inviting as they did more than a century ago when it played host to some of Europe’s richest and noblest families (only updated with modern plumbing) in the very early days of tourism in Norway. Not far away is the region’s largest mountain, Kvitegga, at 1703m already sporting a snow toupe. Walking trails that would test even the most proficient hiker meander off into the distance. The lower slopes are dotted with what used to be the “summer farms”, small stone huts that look like a set from a Tolkein movie, replaced by modern farming practices and the ever-present danger of rock falls.

There seems not a stone out of place in this lovingly maintained village. The houses, many painted the traditional colours like dark red with white windows, are immaculate. There is no rubbish along the roadside. Flowers have been planted near the collection of visitor’s tables and benches. Large barns look more like works of architectural art than an essential part of life, particularly in the winter.

We are seeing it at its late summer finest. But already there are chill winds. It won’t be long before the nights close in. And temperatures drop. The snow will almost certainly fall: up to 2.5 metres. Perhaps the lake will freeze again, as it did a couple of years, and everyone will have a couple of weeks of unexpected fun. But today it looks like the kind of village that postcards were invented to portray. 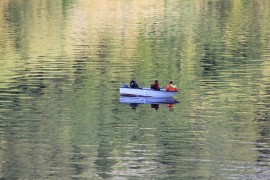 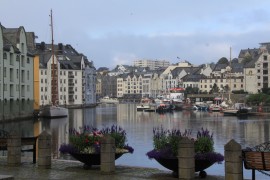