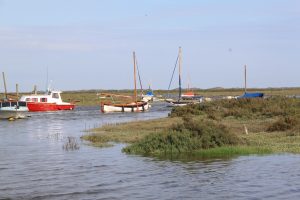 Norfolk, on England’s northeast coast, is one of the most beautiful and unspoiled counties. Much of its coastline is designated an Area of Outstanding Natural Beauty, incorporating an environmental jewel box of saltmarshes, grazing marsh, intertidal floodplains, shingle and sand, providing a perfect backdrop for walkers. Cliffs, dramatic and precarious, reveal the impact of centuries of coastal erosion. In the past, whole communities have been moved to avoid tumbling into the sea. What nature gave, nature is also slowly taking back. Today sophisticated buttressing and vast expanses of wooden groynes have been installed to ameliorate the sea’s onslaught. Talk to locals and the conversation frequently ends on an air of inevitability. What nature gave, nature is also slowly taking back.

The Norfolk Coast Path runs from Hunstanton, where the Wash meets the North Sea, 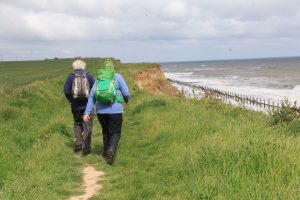 southwest to the village of Sea Palling — just 100km we tell each other. We can do that. There are several Norfolk companies that offer an all-in service, providing different accommodation each night and moving your luggage between stops. We have chosen to organise things ourselves, staying the first three nights in the wing of a beautiful historic house at Dersingham, slightly inland and close to the Queen’s personal estate at Sandringham. The subsequent three nights we stay at Sea Palling in a cosy and atmospheric beach cottage tucked into the dunes on the edge of the sea. Each day we drive to our start point and then return to the car in the evening on the handy Coasthopper bus. 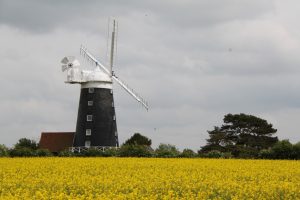 The official start is just outside Hunstanton, past its towering red and white chalk cliffs. The distinctive Coastal Path signpost, with its carved acorn emblem, points along a glorious expanse of beach, the receding tide leaving a sheen of rippling water, sparkling in the sunshine. We pass rows of brightly coloured beach huts and then turn up along the edges of Holme Dunes, run by the Norfolk Wildlife Trust and designated a Site of Special Scientific Interest. Along with the nearby Titchwell Marsh, under the care of the Royal Society for the Protection of Birds, the area provides an important breeding ground and refuge for hundreds of thousands of migrating birds. 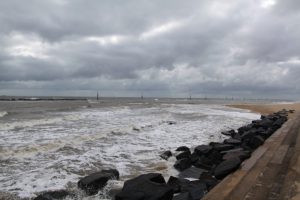 just what we are up for. The skies are glacial blue with puffy cottonwool clouds, and there is a slightly chilly wind, but we have extra layers of clothing stashed in our day packs. Bang on 8am, we draw into the little beachside car park at Holme-next-the-Sea to pick up the path where we left off the night before.

We walk along the sea edge until Thornham, then follow the inland deviation along farm 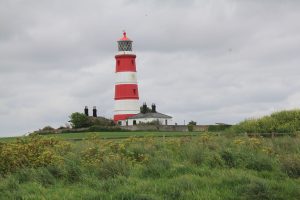 tracks and through fields, accidentally disturbing a couple of twitchers spying on birds of prey. At Brancaster, once the Roman settlement of Branodunum, we stop for coffee at the recently renovated The Ship, with its large distinctive iron motif of a clipper vessel. Then it’s on past the church before arriving back at the sea edge. We make good time despite our stops to take in the breathtaking views and debate the names of birds. Apart from a few locals walking with their immaculately behaved dogs, we often have the path to ourselves for kilometres at a time. 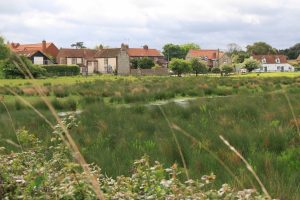 club; a flotilla of wooden boats, with chipper names such as Puffin and Swallow, bob on their berths, the tinkling of metal rigging like bird chatter. Some are listing drunkenly, temporarily high and dry on the mud flats, waiting for the tide to turn and set them bobbing again. Just past a cute public bench made out of an upturned rowboat we find The White Horse, a large pub and restaurant voted the region’s best pub and bar for 2016. Its elevated back terrace is the perfect spot for lunch and a drink, offering spectacular views across marshes to the sea. 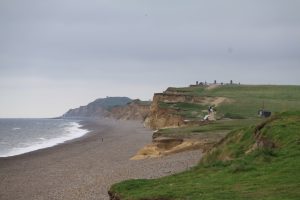 The final stretch of our day’s walk takes us back along the top of a dyke, giving us more stunning views of marshland teeming with wildlife and curving around Burnham Norton (confusingly there are seven Burnhams in the area, including Burnham Thorpe where Admiral Nelson grew up). Finally, guided by its prominent windmill on the horizon, we reach the bustling harbour village of Burnham Overy Staithe, our destination.

The Coasthopper bus arrives on schedule and drops us off not far from our parked car. 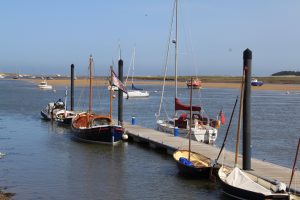 Total distance for the day is 22.69km. We are tired but not exhausted and are keen to try the local beers: a Nelson’s Revenge, perhaps, or a malty Heacham Kriek, or an Old Stoatwobbler stout. Then it’s dinner, a half-hearted attempt at reading and an early night.

This becomes the blueprint, but each day gives us different, unforgettable experiences, such as watching the bright sails of the little dinghies taking part in the Sunday club races, turning the waterways into a patchwork of colour; and walking through fine stretches of trees in Holkham Park, home to Holkham Hall, one of England’s finest Palladian houses and seat of the Earl of Leicester. 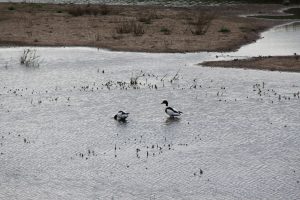 We run fast and low to avoid swooping martins protecting their cliff-face nests at Weybourne, and explore nearby 12th-century Weybourne Priory, which incorporates an 11th-century Saxon church. The medieval clifftop church at Beeston Regis has a beautiful rood screen. It’s eyes down for mammoth bones at West Runton where a mammoth twice the size of an elephant was discovered in 1990. And we see the Edwin Lutyens-designed Overstrand Hall and The Pleasaunce, feeling like we have strayed into a scene from an Agatha Christie novel.

We are surprised to see a US Army personnel carrier loom in the distance, part of the Muckleburgh Military Collection, and struggle to stay upright against the swirling winds as we pass the distinctive red-and-white Happisburgh Lighthouse, relocated brick by brick away from the crumbling cliff. We play dodge-the-waves as an angry North Sea pounds the high wooden sea defences; and see an endless variety of dainty long-legged sea birds skittering across the mud or diving in the pristine waters.

Every second pub (and there are plenty) seems, perhaps unsurprisingly, to be called The Ship and pub grub is universally fresh, tasty and served in generous portions. We surprise ourselves with how far we can walk each day, finishing the entire Norfolk Coast Path a day earlier than expected. We knew we could do it.

During the main season there are organised trips out to see seals, go fishing and crabbing. The area also boasts top-class golf courses with magnificently distracting views. You can also combine the Norfolk Coast Path with the 74km Peddars Way, which begins at Holme-next-the-Sea then heads inland towards Thetford, along the picturesque pastoral line of a Roman road.

London to Norwich is about a two-hour drive or there are direct trains from London (Liverpool Street) to Kings Lynn and Norwich. Hunstanton is a further 70km. A wide range of accommodation is available along the Norfolk Coastal Path, including in windmills at Cley and Burnham Overy Staithe. Airbnb has more than 300 rentals in Norfolk. More: airbnb.com.au.

This article also appeared in The Australian newspaper.