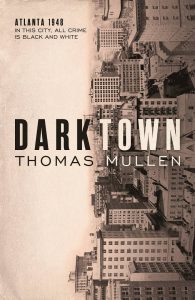 It’s 1948 and Atlanta is a city divided by race, teetering on the cusp of change. Dark Town, the subject of a new book by Thomas Mullen, is the city’s black area, defined by poverty, unemployment and violent crime.

When the mayor decides to set up a black police force, Lucius Boggs, son of an influential preacher, and Tommy Smith, a war hero decorated for bravery, are among the eight selected. Right from the start it’s a poisoned chalice. The white police force is overtly antagonistic, often violently so. Unwanted at the main police station their headquarters is instead the dilapidated basement of the local YMCA. Their powers are limited: they cannot drive the squad cars, cannot arrest a white person without white cops present, are barred from access to normal records. They are constantly and publicly subjected to racial taunts by the white cops, their work deliberately undermined or sabotaged.

Enthusiastic, they learn the hard way to keep their heads down and try not to rock the boat too hard. But when Boggs and Smith discover the body of the young black girl, casually discarded on a rubbish tip, it ignites what becomes a dangerous obsession to find her killer. It brings them up against Dunlow, a brutish white cop lucky to have survived a recent clean out of corruption in the force, and a covert group of disgraced former officers with a link to the highest levels of the city’s white elite.

Threatened and attacked, Boggs and Smith are reassured by unexpected moments of support such as when Danny Rakestraw, Dunlow’s idealistic rookie partner, breaks ranks to secretly help them.

Dark Town is part police mystery, part social commentary. It’s frequently a confronting read, perhaps all the more potent because of similarities to recent events across the US and the current debate on race. If Mullen occasionally slips close to caricature, notably with some the white cops, I don’t think it’s unintentional.

Mullen’s first book, the award-winning The Last Town on Earth was set in a remote mill-town of Washington in 1918 during the outbreak of the deadly Spanish influenza. The town had introduced a strict quarantine and the town is soon split into the guarded and the guards. In Dark Town he continues those themes of exclusion, isolation and power. But he layers on tensions among the emerging black elite as well as a fascinating picture of the seedy underbelly of prostitution, and bootlegging provide a fascinating substructure to the murder hunt.

Click here for an interview with Thomas Mullen. Dark Town is published by LittleBrown.