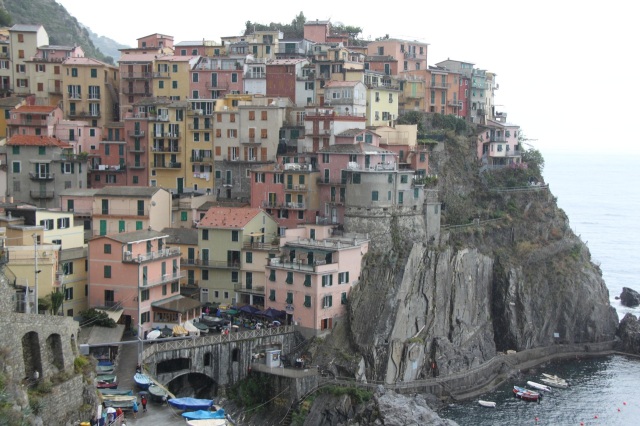 THERE is something almost too perfect about the haphazard patchwork of homes clinging to the precipitous hillside, windows glistening and pastel walls glowing as the sun traverses the buildings.Vernazza is considered the superstar of the five picturesque villages that make up the Cinque Terre on the Italian Riviera, but there is little to choose between it and the others of an illustrious group — Monterosso al Mare, Corniglia, Manarola and Riomaggiore.

They are similar but not the same, all spectacularly beautiful but with their own subtle 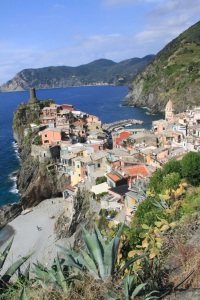 differences in dialects, traditions and rivalries. First officially recorded in the 12th century, the people of the “five lands” led a fraught existence, under siege from marauding pirates despite the ring of protective fortresses erected by their feudal protectors, until the threat eventually evaporated in the 1500s. They eked out an existence growing grapes and fishing.

It was only about a century ago that outsiders really discovered the quiet, natural beauty and less than 40 years since tourism transformed what was one of Italy’s best-kept secrets into an international drawcard. Now, hundreds of thousands of people from all over the world flock to the scenic Cinque Terre, most to complete the Sentiero Azzuro, the string of four paths linking the five villages.

The trail, sometimes so narrow two people cannot walk side by side, twists and turns, hugging the craggy cliffs, rising precipitously then dramatically descending, weaving through charming terraces cultivated with vines and olives, or groves of trees heavy with lemons, oranges and, occasionally, figs. Far below lies the Ligurian Sea, which in good weather is an impossible blue, dotted with brightly painted fishing boats and busy tourist ferries. On bad days, a grey maelstrom sends waves crashing onto the razor-sharp rocks. 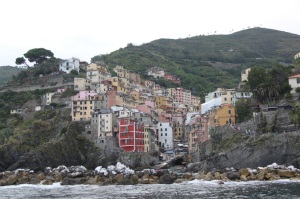 By September the hordes are thinning on the path. The weather is still beautiful but without the sweltering midday heat. Some walkers arrive like scouts for an invading force, armed with Alpenstock poles, well-worn boots, well-practised technique and a look of professional determination. They easily complete the Sentiero Azzuro (the Blue Trail) in less than a day, then head off to conquer other routes in the Cinque Terre National Park or continue along the coastline north or south. But most, like us, are in it for the slightly longer haul, taking things slowly, respecting age, groaning limbs and lungs, staying for two or three days to appreciate the scenery and the unique nature of each of the villages plus, of course, Ligurian wine and cuisine.

We are staying at a charming B&B in the hills above Levanto, the next village north up the 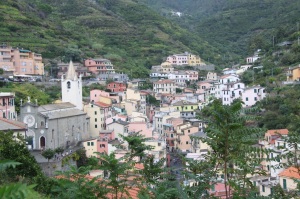 coast from Monterosso al Mare, our starting point. The building, a renovated watermill, backs on to thick forest and groves of olive trees already netted for the season’s crop. From Levanto it is just one stop on the train that links all the villages and provides the main form of transport for visitors.

We have split the Cinque Terre walk into two. Day one, Monterosso then south to 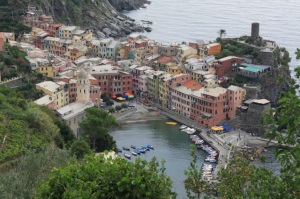 Vernazza and (bodies willing) on to Corniglia, returning to Levanto by train. The train journey takes only minutes, most of it hidden in a tunnel that has been blasted through
the hillside. There’s a party feel about the carriage, full of fellow hikers, the air resonant with a potpourri of languages. Many seem to be going on to Riomaggiore to do the journey south to north, starting with what is seen as the less arduous climbs. We have opted to do the hardest first. Our fingers are crossed.

Monterosso is the biggest and oldest of the five villages and the only one built on almost flat land. It is nearest to what could be considered a typical beach resort. Walking along the waterfront promenade you can see other villages tantalisingly beckoning from far 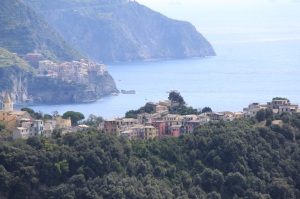 away on the curving coastline, shimmering like mirages. Already we are meeting walkers coming the other way, early risers. Smiles and nods are shared. Then it’s up, up, up and onwards. Did I mention up? The hundreds of narrow stone steps are worn and shiny from millions of feet and seem to rise endlessly until eventually levelling out. Any temporary bouts of discomfort (and others to come) evaporate in the face of that awesome view.

Surprisingly soon, Vernazza is looming, tumbling like multicoloured Lego lava down the steep curves of the hillsides, fishing boats bobbing in its picturesque natural harbour, 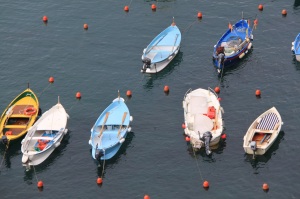 unique among the five. After exploring, we follow the discreet signs to Corniglia, the only village not on the water but situated high on the clifftop from where you can see all the Cinque Terre. Although the smallest of the five, its particular claim to fame is its wine, which legend has it was found at Pompeii.

Day two dawns overcast and cloudy. By the time we arrive at Levanto station, the day has turned into drizzle, the only rain during our stay in Italy. Because the coastal path from Manarola to Corniglia has still not been reopened after a landslide in 2013, our plan is to 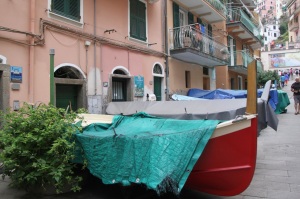 take the train to Riomaggiore and walk the famous Via dell’Amore to Manarola. There we want to explore, particularly the vineyards, before taking the train back to Levanto. The weather changes part of the plans but, as often happens, it turns out even better. Park officials have closed the Via dell’Amore as the rain has made it too hazardous, slippery and, alarmingly, at risk of landslides. But the sun is coming out and the ferries are running. Plan B is looking good. 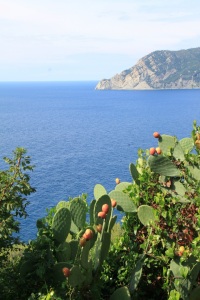 on a fairground ride while it’s still moving; you literally walk the plank that rises and falls steeply in the fierce after-storm swell. But the views, first of the departing Riomaggiore and then of Manarola as we approach just minutes later, are unforgettable. It is easier to see what an engineering feat the villages really are: buildings all higgledy-piggledy, some with no visible means of staying attached, jutting at impossible angles.

Manarola, with its custom-built breakwater, is a steadier landing point. The Piazza Capellini, built in 2004 right over the rail lines in the tunnel below, is brightly decorated with an impressive mosaic of local fish. It is a delightful starting point with great views up the village. There may be no cars to avoid as you clamber up the main street but there are fishing boats parked on either side, like brightly coloured ribs. A particular attraction is the 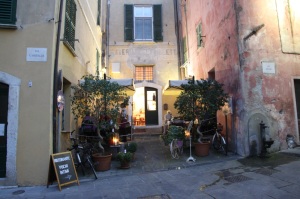 Manarola Vineyard Walk, on which we are accompanied by a scent of rosemary and, occasionally, wild oregano.

So, it is over. Almost. That evening, pleasantly tired, faces still glowing from the sun and wind, we visit Pochi Intimi, a restaurant tucked away in a quiet pedestrian laneway in Levanto. There we toast our adventure with the excellent local house white wine and tuck into really the most delicate and delicious antipasti frutti di mare imaginable.

This is the first in an on-going series of walks around the world that are beautiful, interesting and most important, not requiring the stamina of a mountain woman to complete.