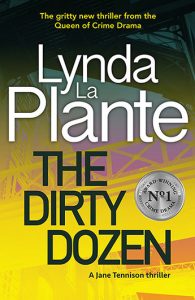 It is impossible to separate the fictional character of British cop Jane Tennison from the actor Helen Mirren who played her so brilliantly in the Prime Suspect series. And from the first pages of author Lynda La Plante’s latest Jane Tennison book, The Dirty Dozen, Mirren is instantly conjured up by the reader, younger than the last time we saw her but still every bit as tenacious (and bloody minded). The Dirty Dozen takes us back to the early days of her career where she has been newly appointed to London Metropolitan Police’s famous Flying Squad (aka The Sweeney). She s justifiably pleased with her trail-blazing appointment – the first woman to join the legendary detectives, however she is soon made acutely aware that she has been set up to fail.  The all male team (self-named the Dirty Dozen) believe that a women can’t cope with the inherent dangers of the job and do everything they can to demean and thwart her. But when Tennison believes she has unearthed the plans for a massive armed bank raid and doggedly chases up each lead to prove her case it becomes impossible for them to ignore or sideline her. Tennison is a fabulous character (on screen and in print) and La Plante gives us a twisting plot, great dialogue. and a picture of workplace tensions that is utterly relatable to  today. The Dirty Dozen by Lynda La Plante is published by Zaffre.

Lady in the Lake, the latest book by the prolific American crime writer Laura Lippman also has

as strong plot theme the gulf between where women want to be in their lives, and where society dictates they remain. It’s the mid 1960s and 37-year-old Maddie Schwartz, bored with her comfortable, predictable white, middle-class life, has left her husband and is waiting for her divorce. When she tries to find work on The Sun, a local paper, she is sidelined helping on an unattributed column called Helpline. Then, unwittingly, she gets herself the opportunity of reporting on a murder case when the body of a woman  is found, decomposed in a broken park fountain and identified as Cleo, a young black woman who has been missing for months. Lippman, who was inspired by the way two 1940s deaths, one black and one white, were treated by police and the public, shows not just the gender politics playing out but also the chasms between social status and colour. Maddie’s an interesting character whose determination to be her own person creates its own pain for others, and there’s a terrific twist at the end. Lady in the Lake by Laura Lippman is published by Faber & Faber. 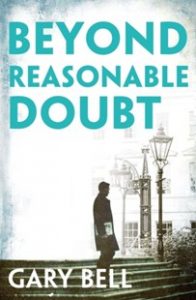 Beyond Reasonable Doubt by Gary Bell, is billed as the first in a series starring Elliot Rook, an unconventional but highly successful QC, who has earned his own share of powerful establishment enemies, including police, by successfully defending several notorious bad guys using the letter of the law as his blunt weapon. But when he is called on to defend the suspect on the murder of a young unidentified girl of Middle Eastern appearance in the city where he grew up, he can feel his world falling apart. For the accused is a white supremacist and violent thug who knew Rook when he was growing up and knows where all his skeletons are buried. Trying to walk a fine line between defending his client and not getting himself killed, provides a highly entertaining novel and one which doesn’t shy away from the grinding social divisions within British society. Gary Bell is himself a QC so expect not a scrap of reasonable doubt about the the twists and turns although the final verdict will keep you guessing.  Beyond Reasonable Doubt by Gary Bell is published by Raven Books. 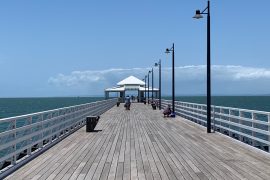 Sunshine and history combine at the beautiful Shorncliffe Pier, Queensland
A quartet of crime for Christmas holiday reading
Navigate
Follow