Ever since I read the opening paragraph of Jenny Offill‘s Dept. of Speculation I have been 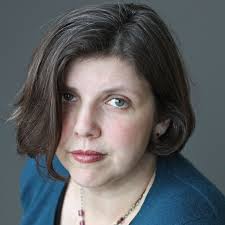 looking for an opportunity to slip it into casual conversation. “Antelopes have 10x vision, you said… That means that on a clear night they can see the rings of Saturn.” I checked it out on the Internet where opinion seems divided on its accuracy. But I’m backing Offill. I like the idea of a group of antelope standing around looking up into the night sky and marvelling at its wonders.

The book is peppered with scientific data and quotations from, or references to, texts from writers like Socrates, Coleridge, Simone Weil and Carl Sagan, interesting snippets that Offill says she collects during the periods when she can’t write. Which, she contends, is quite often.

At its heart, The Dept. of Speculation is about the marriage of an unknown narrator who had planned to remain forever single, be an “art monster” who liked to travel alone. Until suddenly she didn’t any longer. Her friend, the philosopher, introduces her to a man who creates audio cityscapes on nighttime radio and they get married. He is, she says later, a man she had “never not wanted to be married to.”

She teaches and earns extra money ghost writing to an obnoxious millionaire fascinated by space travel. Her husband gets a less interesting job but one that pays better. They have a daughter, get a bigger flat. Then her husband decides to leave her and live with a woman with whom he works.

At first, the structure of the book intrudes. The text is positioned between wide margins on either side and with extra spacing between the paragraphs, makes it look insubstantial and disjointed. Gimmicky. But it’s not. Instead it brilliantly reflects the jittery nature of the narrator as she jumps backwards and forwards reviewing her life in short, tantalising, gulps.

In 177 pages she moves from contented solitude to domestic bliss, to parenthood, to crippling surprise at the fragmentation of the relationship to potentially the most difficult phase of all. Hope. It is funny and very sad at the same time. And it is not just the way the text sits, like stanzas, that make it feel at times like poetry. The prose is delicious. In all, a small but perfectly formed book. I loved it.

Dept. of Speculation by Jenny Offill is published by Granta Books and Knopf. It was the Guardian Newspaper’s Book of the Year 2014. It was shortlisted for the PEN/Faulkner prize for fiction which was won by Preparation for the Next Life by Atticus Lish.

A provocative and unsettling view of relationships
Indigenous community march in Redfern, Sydney to commemorate 100th anniversary of ANZAC landing at Gallipoli 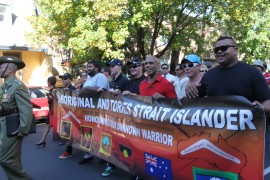