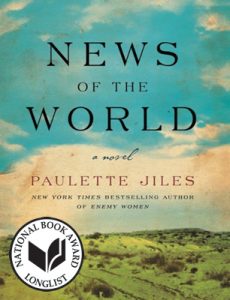 I was late compiling my list of my top 10 reads for 2016. But that turned out to be a good thing. I have only just finished News of the World by Paulette Jiles, and, it seems, I had saved one of the best for last. News of the World  is set in 1870 in an America still devastated by war. Captain Jefferson Kidd, a 70-year-old veteran, travels the country earning a living readings newspapers to a population desperate for information. He agrees to return Johanna, a 10-year-old girl who had been captured years before by the Kiowa tribe of indians to her distant relatives 400 miles away. It is a beautiful, moving story that will become a classic.

That period of dramatic and bloody change in America also provided the setting for two others on my list of favourites. Sebastian Barry’s Days Without End is the story Thomas McNulty and John Cole, two young Irishmen who forge an unbreakable friendship fighting alongside each other in the Indian Wars and then the American Civil Wars. Alongside the blood and the brutality it is haunting a story of love and beauty and written in Barry’s typically elegant prose

Then there is The Underground Railroad the much-acclaimed novel by Colson Whitehead which provides a unique perspective on the perilous escape route for runaway slaves. Whitehead turns a penetrating spotlight on the role of even seemingly benign whites and on the manipulation of black history. This will keep people talking for years.

My Name is Lucy Barton is another gem from one of my favourite authors, Elizabeth Stroud. Brought up in a dysfunctional and sometimes violent home where her mother seemed incapable of protecting her, Lucy Barton has long severed all but the most tenuous ties. But when she is hospitalised with a mysterious illness her mother suddenly appears and the two find an unexpected closeness. 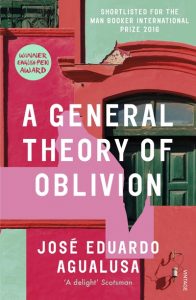 Little wonder Jose Eduardo Agualusa’s A General Theory of Oblivion  was short-listed for the Man Booker International 2016. It is wonderful. On the eve of Angolan independence  Ludo bricks herself up in her apartment where she remains for the next thirty years as history plays out around her. The outside world filters through to her via overheard voices or snatched glances from her roof. Until one day when a street boy climbs up the tree outside.

Until picking up Our Souls at Night I had not read a book by the late Kent Haruf, despite his fine reputation. Set in small town America it starts with Adele Moore, a long-time widow, who asks her friend and neighbour  widower Louis Waters is he would like to sleep with her. sometimes. They are both alone, sometimes lonely. Why not? It is the story of their relationship. But so very much more. I couldn’t put it down, consuming it in one fantastic sitting.

Hannah Kent’s debut novel, the hugely successful, Burial Rites was always going to be a hard act to follow. The Good People is set in the remote west of Ireland in the early 19th century, a time of grinding poverty and powerful superstition.  Nora Leahy’s daughter and husband have both recently died leaving her to bring up her severely disabled grand-son Micheal. She Increasingly turns to Nance who has “the knowledge” not just of herbs and local remedies but also The Good People, the all powerful fairies. Kent has an amazing talent for story-telling. 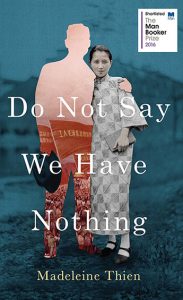 backwards and forwards in time but always has at its heart three students, Sparrow, Kai and Zhuli. Bound together by a love of classical music their lives are shattered by the Tiananmen Square student uprising and the devastating repercussions. Complex, layered and totally absorbing.  It was short-listed for the Man Booker.

It is extraordinary Viet Than Nguyen’s The Sympathizer is a debut novel so clever, complex and assured it is. At its heart it is the story of a man who’s political beliefs clash with his personal loyalties. But the story plays out through the Vietnam War and its aftermath, with the location moving from Vietnam to a the Vietnamese diaspora living (and occasionally plotting) in America. It’s a love story, a spy story, a family saga; brutal, compassionate and occasionally laugh-aloud funny. No wonder it won the Pulitzer prize.

I have read some great crime books this year: Donna Leon’s The Waters of Eternal Youth, Aussie debut author Sam Carmody’s The Windy Season and Fever City by Tim Baker and Fiona Barton’s The Widow to name just a few. But in the end my favourite has to be Even Dogs in the Wild by Ian Rankin. Rebus is back. No longer officially in the police but still running things his very unorthodox way 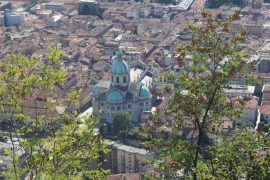 The Duomo, dominating the iconic Lombardy city of Como
A sparkling new year in Sydney 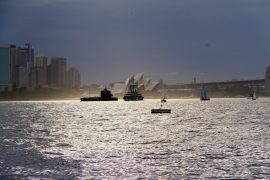