The inhabitants of the small English village, so meager that it does not even have a name, are celebrating the end of the annual harvest. It is a rare moment of carefree pleasure for the families who eke a living growing crops and grazing their animals on the common land they have lived on “since Adam”.

But the arrival of a surveyor, taking stock and drawing maps of the land, creates a cloying atmosphere of anxiety and gossip. Then fire destroys the stable block and outbuildings belonging to the benign Master Kent, who owns the fields and effectively the village. A ragtag mob sets off following the thin ribbon of smoke rising from a lean-to on the edge of the common. The strangers make ready culprits. The two men ending up in to stocks, the enigmatic woman, shorn but free.

Crace’s Harvest, long-listed for the Man Booker Prize, is set in an unspecified year during the period of the Inclosure Acts (now referred to as Enclosure) in England, between approximately 1750 and their consolidation in 1801. These Acts were responsible for the mass dispossession of vast numbers of peasantry across the country as the tens of thousands of square acres of common land on which they had lived for generations was consolidated in the hands of the gentry, ostensibly to make it more productive. This, as much as industrialization, is seen as being responsible for the migration from the rural parts of England to the cities.

From the first page of Harvest the reader feels the weight of a swirling cloud of uncertainty, gradually intensifying to one of impending doom. This is a world where human life is cheap and disposable, where straying out of your place in society, however unintentionally, is fraught with danger, and where sorcery and ignorance still dominate.

The story unfolds through the witness of Walter Thirsk who has lived in the village more than 12 years, marrying and then burying a wife. He has an easy familiarity with Master Kent dating back to boyhood, a relationship that whilst beneficial makes him neither gentry nor villager. And as the day-to-day life of the village, ruled better than clockwork by the demands of each season, irrevocably changes he is caught in his own internal battle to belong or to survive.

It is Walter who first suspects that the surveyor’s meticulous work has ominous overtones for the future of life on the Commons. The feelings intensify with the arrival of the cousin of Master Kent’s dead wife, who has inherited the estate through the direct blood line. Rather than the more risky, labour-intensive crop cycles, he sees sheep and the weaving industry as the future.

The surprise death of one man gives rise to a domino effect of retribution. Master Kent’s mare is brutally, almost ritualistically killed. Two local women and a young girl, still wearing her bright Harvest Queen regalia, are rounded up and after the enthusiastic brutality of the servants confess to sorcery implicating others.

The “village fabric’’ unravels into tangling threads of suspicion and fear.  However unknown and distant, the world “out there” cannot be a frightening as the violent revenge the villagers know will be enacted against them, so bundling up their sparse belongings as one they flee beyond the boundaries, breaking what had been a relationship with the land dating back “to Adam.”

Jim Crace’s prose is beautiful, full of earthy lyricism and with a steady sense of rhythm. The two narrative arcs – crime and retribution plus identity and displacement – are seamlessly blended. Crace has said Harvest will be his last book, which is a shame. The fact he can end the book with several mysteries unresolved yet the reader feels satisfied, not robbed, shows the power of his story-telling.

We Need New Names by NoViolet Bulawayo, which is also short-listed for the Man Booker Prize, was reviewed by Stillnotfussed earlier this month. As many as can be completed before the announcement of the short-list in September will also appear here. 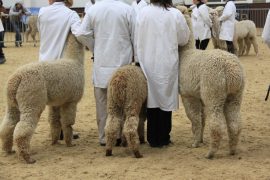