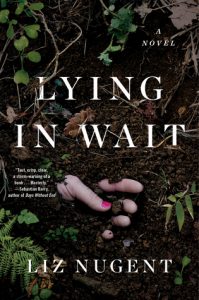 You know you’ve found a terrific book when you can’t wait to get to the end, and then are bereft that it’s all over. Lying in Wait by acclaimed Irish writer Liz Nugent is terrific. It  was first published in 2016 but only landed in my book pile when a neighbour and I did a book box swap as part of the current Covid-19 battle to keep mentally fit.

From the first line of the first page, Nugent,  named Irish Woman of the Year in Literature for 2017, has you hooked. Told through the carefully sequenced voices of the main characters, it is Lydia who kicks things off: “My husband did not mean to kill Annie Doyle, but the lying tramp deserved it.” Lydia Fitzsimmons’ life is pretty much perfect. She lives in a large elegant house outside Dublin, with all the trappings she believes she richly deserves. Her husband, the rather bland but besotted Andrew, a Dublin Judge who would do anything for her. She dotes on her socially awkwardly son, Laurence, obsessively.

Whether Andrew meant to Kill Annie or not turns out to be pretty irrelevant. Much more moot is why he happened to be sharing an evening drive with Annie, a young, rebellious drug-addicted prostitute, just before her death? And why was Lydia so keen to have the body surreptitiously interred  under the bird bath in her garden? And if Laurence is curious about the unexpected activity, he knows better than to ask.

Lurid newspaper headlines, after Annie’s family push for an inquiry into her disappearance, send Andrew into a downward spiral. But after a few days relishing the limelight, the police end their half-hearted search. So it’s back to life as usual. For Lydia, at least.  For Annie’s sister, Karen, there is no normal life until she finds out what really happened. And she’s joined in the quest by Laurence, who quickly shows he’s been under-estimated by everyone, not least, Lydia.

Through a series of deft, knife-edge twists (each accompanied in my mind by the screeching violin in Alfred Hitchcock’s movie Psycho), Lying in Wait takes us into a world of lies and deception, villains and victims (sometimes both at once), with at its heart a chilling sociopath.

Nugent’s bestselling debut Unravelling Oliver was named Crime Novel of the Year in Ireland and her most recent book Our Little Cruelties was published last month by Penguin. 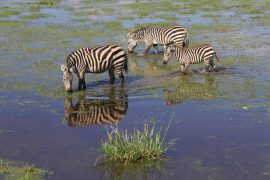 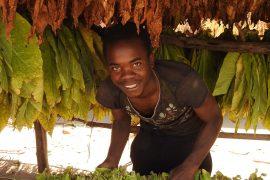