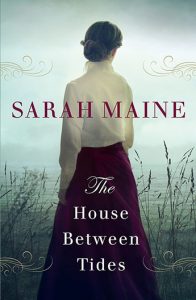 I read Sarah Maine’s debut novel The House Between Tides over a couple of days while enjoying Fiji’s balmy climate. It’s a credit to her ability to create a deep sense of place that the winds whistling through the Outer Hebrides island lost none of their chilly bite, nor the wild seas their temper. It’s 2010 and when the last of her relatives dies and bequeaths her the ancestral home, Hetty Deveraux leaves her troubled relationship and travels to Scotland. She has dreams of restoring the house and potentially opening a hotel on the magnificent rocky outcrop where it is perched.

But when she arrives she find it is less a house than a tumbling down neglected memorial to the brilliant but troubled artist Theo Blake who had lived there until his lonely death. Then a skeleton is unearthed beneath what’s left of the floorboards and Hetty finds herself drawn into a century-old mystery surrounding Theo, his young wife Beatrice and Cameron, the charismatic son of Theo’s estate manager.

It turns out it’s not only nature that is intent on preventing Hetty fulfilling her dream. Most of the locals don’t want a rich man’s hotel, with golf course and grouse shooting. They want the island to be what it had always been, an important bird sanctuary and sustaining home to crofters. And then there is the troubling presence of James, ostensibly hired to check the feasibility of restoring the home but seemingly with an agenda of his own.

The House Between the Tides jumps around between 2010 and 1910, with sometimes dizzying speed, although the chapters are helpfully identified. But I also found myself occasionally grappling with keeping track of the relationships between the locals across the years. Maybe the palm trees were a distraction.

But overall it is an absorbing and very moving holiday read. Maine describes the outstanding landscape beautifully. And the scenes about Theo’s driving need to paint all the native wildlife to preserve them forever, and his destruction of some of the most unique breeds while he does so, is particularly effective. Part historical love story, part gentle but tantalising thriller, Maine’s descriptions of some of Theo’s key paintings offer a beautiful subtle eye into a troubled genius and make you wish the paintings actually existed.

The House Between Tides is published by Allen & Unwin. Maine, who lives in York, England, is an archaeologist. 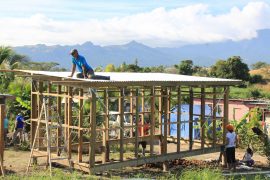 The roof is on our Habitat for Humanity home build in Fiji. And what a view.
The Windy Season by Sam Carmody: A disturbing sense of menace with a unique Aussieness
Navigate
Follow