There is a bleakness about the approach to Skarsvag, the fishing village on top of the world, that is both beguiling and intimidating. The fjords are thunder grey. The vast imposing mountains covered only with a thin veneer of vegetation:  no trees can withstand the wind that slices across the contours. Not so long ago the community boasted its own school with the children earning pocket money by going door-to-door selling the local delicacy of cooked halibut tongue. But now there are slightly more than 50 people left. Most, like Heidi Ingerbrigtsen, have lived there all their lives. But she says that a Sami family recently a welcome addition to the community except for their reindeer herd’s penchant for grazing on her flowers. Heidi  is the enterprising wife of a local fisherman who has carved out a 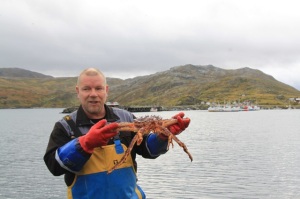 flourishing cafe and visitor centre at Skarsvag which is officially the northern-most fishing village in the world. She has raised her three children there and has seen them leave for the bright lights of Tromso and Oslo. So, while her husband still goes out fishing every day, throughout the summer Heidi welcomes visitors, particularly from the port town of Honningsvag where the Fjord cruise boats briefly moor. Usually, cod

is king of these icy waters but recently the King Crab, released into a more distant area by the Russians has spread and taken over. Not the most beautiful but certainly one of the tastiest crustaceans the King Crab is friend but potential foe.  The fishermen are getting a far higher price for it than cod, particularly from the voracious Korean and China market. The crab are packed live and flown over for dinner.  But there is also the fear that there will be a permanent impact on the cod industry. The fishing fleet has already dwindled in size over the decades. The once prolific fish production plant largely focusing now on live export.

baked cake and waffles, are beautiful home-knitted sweaters and hats, socks and cardigans, all in the traditional Norwegian design. In the next few weeks the women’s group which, during the long, dark winter days gets together to chat and to knit, will begin re-stocking the shop with treasures for tourists to take home next summer. Heidi says the snow will come soon, in October, and the temperatures will drop. There is electricity, except when there isn’t. Then it is log fires and lanterns and the traditional building insulation that keeps everyone warm, unless you’ve got a personal generator.

Heidi says she cannot see herself ever leaving Skarsvag. But many of the houses that once were home to permanent residents are now being bought up by visitors from “the city” for bargain prices. Other outsiders are moving in to offer personalised fishing trips hoping to land the mighty halibut. Earlier this year a German visitor landed a world record halibut in the nearby Kjollefjord waters. When he hooked the 513 pound monster he thought he’d accidentally snagged a submarine. Like other small villages in remote areas Skarsvag is under pressure.  Maybe its the all-year-round Christmas feel to her charming shop that keeps her optimistic but Heidi is certain the village will survive although the chances are, she says, that it will probably become a “summer” village. Except for the locals. 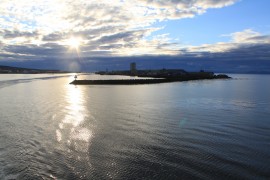 Another beautiful Norwegian morning dawns: welcome to Vadso, centre of Finnmark
The colours of autumn outside Kirkenes by the Norwegian-Russian border 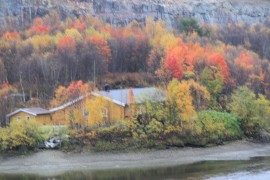