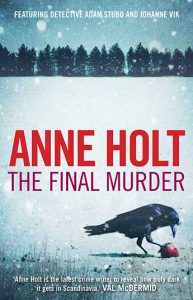 When The Final Murder opens they are now married and Stubo is on paternity leave after the birth of their daughter, Ragnhild. It’s a sad commentary on the marital skills of many factional cops, that he flatly refused, even when ordered, to return to the back in the office due to a particularly high-profile killing of an attractive TV presenter. Stubo is a refreshingly normal character. Humane and caring. Apart from the occasional forbidden cigar and glass of wine to assist contemplation, he’s devoid of the traits that tend to single out the modern crime buster. He’s a good father both to Ragnhild and to the strangely quirky Kristiane, Vik’s daughter by an earlier marriage. When he eventually returns to work he finds that little progress has been made on the murder case. Apart from a few grisly, and clearly very personal touches, the murderer has left no clues. Then a second body turns up, equally high profile and as baffling as the first. Public tension mounts as it begins to look like the police will never solve the cases.

Stubo persuades his wife to help him build up a profile of the killers. She realises the clue is in her troubled days studying with the FBI at Quantico, work involving some of the most terrifying murderers in history, but cannot make the final link. Dangerously sleep deprived she has become terrified that these killings are not only somehow linked to each other but also contain a threat to her husband and his new family.

Holt, one of Scandi-noir’s most famous and successful authors, is excellent at slowly building up the tension. Her previous work as a politician and a lawyer make her well placed to weave together details of day-to-day life in all levels of public administration to obfuscate and confuse. And in The Final Murder there’s an excellent twist. Not an explosive, all guns blazing, twist. Something cleverer, and thus more sinister for that.

The Vik/Stubo series consists of five novels the first of which was originally published in Norway in 2001. The third, Death in Oslo, or Madame President as it was originally called, is currently scheduled for release in October (well, in Australia at least). A warning for those who like to read series in order, Fear Not, the fourth in the series, was released in translation several years ago. What Dark Clouds Hide, the finale (also described as a standalone) has no release date at the moment.

All books are published on the Corvus imprint and translated by Kari Dickson. Holt also writes the highly popular Hanne Wilhelmsen series.