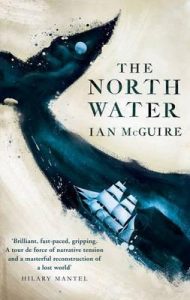 Rug up when you settle down to read The North Water, or strongly defend your spot in front of a blazing fire. Author Ian McGuire has created a world so physically, emotionally and psychologically bleak that, from the first few pages, you know you’re going to be in for a chilling time.

It is the 1850s and former army surgeon Patrick Sumner has signed up for a six-month voyage on a whaler, The Volunteer, out of Hull, a town on England’s north east coast that was once the heart of a booming whaling industry. But Volunteer is putting to see, heading into the treacherous Arctic waters in the twilight of an industry overtaken by new fuels like coal oil and paraffin.

It’s badly paid and at the bottom of the social heap but Sumner has a festering scar from his past that leaves him no alternative. Cashiered from the Army after an incident at the Siege of Delhi in India, addicted to laudanum, he is relieved to be able to find an undemanding respite where he can lay low and tend his wounded body and soul.

But he’s not alone. It seems that everyone has some kind of (usually gruesome) secret they carry within themselves, or are running from. They are dour, tough, ruthless, woebegone men, for whom life, including their own, is worth little. In the first few pages we meet Drax, the brutal, psychopathic harpoonist who has already killed a Shetlander who offended him and a young boy he believed was luring him into a trap. He’s a strict adherent to the devil’s incantation to: ‘do unto others before they do it unto you,’ although he phrases it slightly more graphically.

But when a terrified young cabin boy is sexually assaulted, and a terrible discovery in the ship’s fetid hold, Sumner finds deep in his battered psyche there still exists a sense of fairness and justice

However it soon becomes clear that Brownlee, the Captain, has more than hunting down either the culprit or a successful whale harvest. He’s been given special instructions by the wealthy owner, Baxter, to whom The Volunteer is worth more at the bottom of the ocean than back in its berth.

There’s little really to surprise the reader in the basic plot but it’s no less enjoyable for that. McGuire has created about as scabrous an ensemble of characters as you could imagine, inhabiting a frigid version of Dante’s inferno. The descriptions of the men’s attacks on the whales and on each other are visceral and shocking. The landscape is both glorious and terrifying.

Similarities will inevitably be drawn between The North Water and Joseph Conrad’s Heart of Darkness. But here the focus is less on the similarity between civilised people and savages but more the epic struggle between man and the harsh, unique environment he finds himself marooned within: can he not only stay alive, but find redemption.

The North Water was recently long-listed for the Man Booker Prize 2016 longest. It is published by Simon & Schuster.