Elizabeth Harrower emerged from the lift smiling and looking slightly

bemused. Petite, with a helmet of well-cut grey hair, still nimble at 87, she later admitted this was the first time she had appeared as special guest at a public function.

She was facing a small, hometown audience at the library in Mosman on Sydney’s north shore, there to celebrate the publication of A Few Days in the Country, her new collection of short stories. She clearly knew many of those in the audience. Others still were former literature students who had studied her work and were evidently in awe. But, by the end of the evening’s discussion, with Michael Heyward the head of Text Publishing, it was obvious she would have been able to hold her own, and captivate, any gathering. Self-deprecating, witty, sometimes painfully honest.

Elizabeth Harrower is frequently described as Australia’s greatest author you have never heard of. That’s not really applicable any more. Ever since Text printed The Watch Tower as one of its prestige Text Classics fiction range, quickly followed by Harrower’s four other novels, public interest in, and recognition of Harrower enormous talent, has been growing. 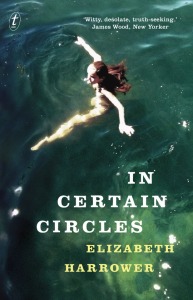 In 1971, just a few months before the publication of In Certain Circles, her fifth novel, she withdrew the book and made the decision to stop writing entirely. “That was a very great mistake,” she told her audience. “But there was no going back on it … I have to say I think I was self-destructive. I’m not proud of myself. Or pleased.”

“It was a conscious decision. That was it. It was like someone going to war. Dramatic and final. However,” she says, with a pause, “I still have my typewriter.”

In an interview with Susan Wyndham in the Sydney Morning Herald  in October 2014 she said that she had been absolutely “frozen” by the death of her mother at the time. She added that she has been “very good at closing doors and ending things … what was going on in my head or my life at the time? Fortunately, what ever it was I’ve forgotten.”

It was also fortuitous that Heywood began what was a long-haul campaign which resulted in permission to access the six drafts of In Certain Circles which had (again fortunately) been deposited in the National Library of Australia.

Heywood, who eventually published the book, said that studying the work that Harrower did between the penultimate and final version would provide a perfect master class in editing, it was so immaculately finessed.

Harrower still has a zinging memory of her early life in first Sydney and then to Scotland and London before eventually returning to Australia. She echoed a young woman’s delight in the six week boat journey with the different perfumes of each passing land, of neon lights and the coffee shops, the theatres (so many more then), her first typewriter of her decision to write a novel about Sydney even she had thought never to return.

Was it an advantage to have been on the other side of the world and to write about Sydney? “You can’t see a thing if you are too close to it.”

For the next years she wrote, and wrote. To get her words down on paper was a “driving force.” Nothing else was important. “You learn by doing … you prove to yourself that you are a serious writer by what you are prepared to give up.

After the critical success of her first three books she decided to return to Sydney, particularly to her mother. “I can remember a terrible nightmare coming back to Sydney. I was very dubious. Then I went to my mother’s house … a staggering view. The sky and the weather. I had forgotten how beautiful it was.”

Harrower described herself as always being a voracious reader, reading anything she could get her hands on fiction or non fiction so long as it was good: “They all spoke to me … we should all feel so grateful that these books exist.”

Yet she has not been back re-read her own novels. Last night she read aloud a passage from The Long Prospect as if approaching new words and fresh sentences. “First time I’ve read that in half a century,” she said.

Harrower lived amidst a rich literary circle. Christina Stead and Nobel Prize winner Patrick White were among her close friends. “We just hit it off,” she says of White “… He improved my cooking … as he became less well, every Sunday morning he would ring and have long conversations about human nature … lots of gossip.”

She is laughing as she recalls how White used to shout at her in capital letters when he wrote: “Why won’t you write?”

So will she write again? A memoir? “I don’t think I would inflict that on you.” Hopefully, she was joking. . 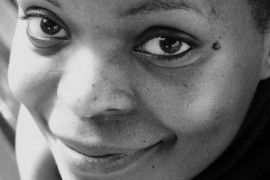 Review: The Book of Memory by Petina Gappah
Is this the most beautiful lighthouse in the world? 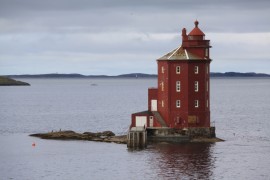