Never Go Back by Lee Child was the adult fiction book most borrowed from Australian libraries during the first quarter of 2015 according to a survey carried out by the Australian Library and Information Association. Jamie’s 15 Minute Meals by Jamie Oliver was the most borrowed non-fiction, Diary of a Wimpy Kid by Jeff Kinney most borrowed children’s book and Hunger Games series by Suzanne Collins the most borrowed young adult book.

Imagine. On Wednesday 27 May, at 11am, the National Simultaneous Storytime is being held with more than 360,000 children expected to join in as The Brothers Quibble by Aaron Blabey being read aloud at venues all across Australia. There are 1,515 public library service points across the country which include 76 mobile libraries. According to the survey in all 174million items, books and ebooks, were lent to more than 10 million members of a library.

6.       The Narrow Road to the Deep North by Richard Flanagan (Australian) 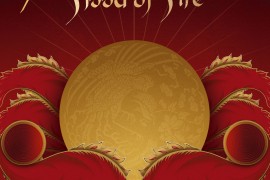 Rarely has history been so compelling as in Amitav Ghosh’s new book Flood of Fire
Australia’s emerging young writers get a boost with Hachette’s new $10,000 prize
Navigate
Follow