The Crime Writers’ Association has announced the long lists for its  three majer crime Dagger awards which include many of the biggest names in the genre. Stephen King’s Mr Mercedes, Michael Robotham’s Life or Death, Robert Galbraith’s The Silkworm  and Attica Locke’s Pleasantville are among the ten contenders for the Goldsboro Gold Dagger awarded to the Best Crime Novel of the Year. Full long list.

Paula Hawkins’ runaway success The Girl on the Train and Harlan Coban’s The Stranger, Karen Slaughter’s Cop Town and Patrick Hoffman’s The White Man are among the long

list of the ten books vying for the Ian Fleming Steel Dagger.  And among the authors long listed for the John Creasey (New Blood) Dagger are Celeste Ng for Everything I Never Told You, The Killing of Bobby Max by Cal Moriarty, Fourth of July Creek by Smith Henderson and Dry Bones in the Valley by Tom Bouman. Full Long List. The shortlist for all categories will be released on the 30th June and the winner  announced in September at an award ceremony in Central London.

Alex Hammond’s The Unbroken Line reveals an intricate web of murky relationships
Pic of the Day: The Great Wall of China 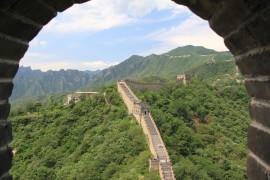