Congratulations to friend and colleague Nicolas Rothwell whose novel ­Belomor has been long listed for the $60,000 Miles Franklin Literary Award, Australia’s most prestigious literary prize. The list, announced this week, includes some of the country’s most respected authors such as Tim Winton, up for a record fifth Miles Franklin for Eyrie, Alexis Wright, who won in 2008 for Carpentaria, but nominated this year for

The Swan Book, and Richard Flanagan, for his moving The Narrow Road to the Deep North. Others are Melissa Lucashenko for Mullumbimby, Trevor Shearston for Game, Ashley Hay for The Railwayman’s Wife, Tracy Farr for The Life and Loves of Lena Gaunt, Fiona McFarlane for her debut novel The Night Guest, Cory Taylor for My Beautiful Enemy and Evie Wyld for All the Birds, Singing. The shortlist will be announced on May 15.

The Lemon Grove by Helen Walsh is much more than a tale of temptation
Picture Essay: Temple guardian, Mandalay, Burma 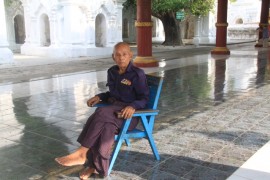