Preparation for the Next Life, by debut author Atticus Lish is an extraordinary portrayal of people on the margins of life. It centres on the lives of two people who stumble across each other when they are at their most vulnerable and forge a relationship in which each is subtly offering the other salvation rather than seeking it themselves.

Zou Lei is an ethnic Uighur from remote northwest China who has sneaked illegally into America. She exists by scavenging and doing menial jobs, including working at cheap Chinese restaurants in Queens New York. But her remote dialect means she often cannot understand them or they her. And despite her tireless attempts to find her place in the social hotchpotch, she remains an outsider to everyone. Her Muslim faith is an additional alienating danger in post-9/11 America.

Skinner is an Iraq veteran wounded in an attack in which most of his friends were killed. Too psychologically damaged to function properly when he returns to Iraq after treatment he is eventually tossed back into civilian life by the Army and drifts to New York. But his PTSD means he is never really free from his past, from the atrocities that he saw and which he too part in.

At first he is the outsider: “After he had gone beneath the railroad bridge a second time, he saw a group of men hanging around in front of what looked like a condemned building, smoking cigarettes… The men eyed him. What’s the foreigner doing? Look at this clothing of his. A cop? A health inspector? A person with time on his hands. Pay no attention to him.”

But he eventually finds himself a room in the basement of a run-down house and hunkers down adopting a survival routine of alcohol and pills that enable him to maintain an often tenuous hold on reality. Skinner and Lei each sees the other as both an added burden and as a lifeline. By caring for each other their own life doesn’t seem so bad. Both see physical power as part of their salvation. The relentless momentum of running, working out and lifting weights, becomes an overt manifestation of internal as well as physical strength.

As each stumbling block edges Skinner nearer and nearer to his own psychological precipice, Zou Lei retains a seemingly indefatigable sense that she can succeed. For her, a setback is just something to be overcome, as she has had to do all her life.

Preparing for the Next Life is both an incredibly sad and an uplifting book. Lish has a brilliant eye for the often-ugly minutiae of every day life amongst the debris of society where, even at the bottom, there is a strident hierarchy and aggressive tribal defensiveness. Right from the beginning you know where Lish’s plot is going but that strengthens rather than weakens the book. The language is the real delight.

Preparing for the Next Life, which is published by the tiny Tyrant press, is his debut novel and won the PEN/Faulkner Prize for fiction 2015 recently announced. 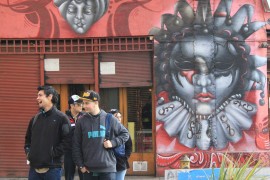