cured and smoked salamis. One night, in the midst of a wave of petty vandalism and theft, the shed was broken into and the salamis were taken. My son talked to his landlord about it the next day, commiserating over the vanished sausages. The landlord was resigned and philosophical, but corrected him: ‘They were not sausages. They were salamis.’ Then the incident was written up in one of the city’s more prominent magazines as an amusing and colourful urban incident. In the article, the reporter called the stolen goods ‘sausages’. My son showed the article to his landlord, who hadn’t seen it. The landlord was interested and pleased that the magazine had seen fit to report the incident, but he added: ‘They weren’t sausages. They were salamis.’

You can read more wonderful Lydia Davis short at Five Dials online magazine. This week it was announced that Davis’s The Seals is one of 18 short stories, including ones by Lionel Shriver and Molly Antopol, to be included famous O. Henry Prize Stories book to be released later in the year. The full list of winning short stories are:

Preparation for the Next Life by Atticus Lish is an extraordinary portrayal of people on the margins of life
The Museum of Things Left Behind, a delightful modern fable of tea and the danger of consultants 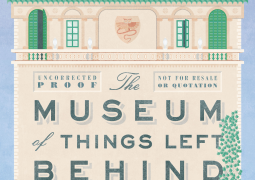