One of my favourite crime books last year was The Dark Inside, the debut novel by 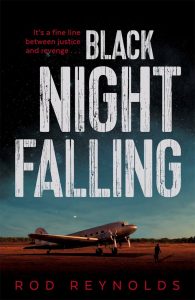 British writer Rod Reynolds. It was set in 1946 and Reynolds had managed to capture the all-pervasive fog of casual menace and violence that makes shows like True Detective so compelling. Now comes the sequel, Black Night Falling. It’s just a few months after The Dark Inside. Journalist Charlie Yates, bruised and bloodied, has left Texarkana hoping to pick up the jagged pieces of his life in the more benign atmosphere of America’s west coast. But a desperate phone call from a former colleague, Jimmy Robinson, pushes all the right buttons: “Dead girls. Unfinished business. The right thing.”

Yates heads for Hot Springs, Arkansas, and from his first footsteps on the airport tarmac he knows he is in trouble. Robinson is missing. Hot Springs is peopled by racketeers, prostitutes and mug punters. All Yates has to go on is the untidy stack of his friend’s scrawled notes and unidentified photographs and a growing apprehension of impending doom.

This could all too easily have become a parody of authors like Chandler and Hammett; the beautiful prostitute, the crooked cops, a mayoral race run on gambling money. But Reynolds has put his own stamp on the characters. In particular, the fear that rules and wrecks so many lives is visceral. He builds the tension slowly. Nothing is black and white. And sends Yates and the reader down some bruising blind alleys. Constantly testing his mettle.

In Charlie Yates he has created a strangely compelling lead character, proof that although good men sometimes to do very bad things for the right reasons they don’t always escape from the process unscarred. Mentally and physically.I hope he’ll be back.

Black Night Falling and The Dark Inside are published by Faber & Faber.