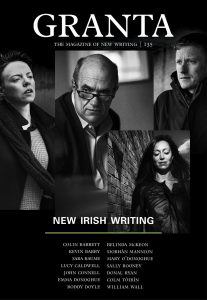 I can never quite make up my mind about how best to go about reading a collection of work by different authors: sequentially or randomly? Individually, with a gap between each, or as one continuous experience? If editor Sigrid Rausing had a particular leitmotif in mind when compiling Granta 135 New Irish Writing (in her introduction she writes of identified themes such as the relationship between place and self, and a sense of displacement) it didn’t seem critical. So I played lucky dip, moving backwards and forwards as the fancy took me.

The book gathers together 14 writers ranging from established authors like Colm Tóibín, Roddy Doyle and Emma Donoghue to “emerging writers” although even these seem to have already garnered an impressive list of official accolades. It just shows the weight of Irish writing talent in that the collection is notable for who isn’t included: Anne Enright whose The Green Road was Ireland’s Book of the Year, and Lisa McInerney whose debut novel The Glorious Heresies yesterday took out the prestigious 2016 Baileys Womens Prize for Literature, are two who immediately sprung to mind.

Emma Donaghue’s The Wonder bodes well for her upcoming book from which it is taken. Unfortunately, as beautiful as her writing is and story telling is, I found it felt like what it is, an extract. And left me desperately needing more. Not so Doyle’s slight but agonizing Smile, also taken from an upcoming book, which stands powerfully, blisteringly, complete.

I was totally charmed by Sara Baume’s Green, Mud, Gold about two cousins “fugitives from the reception of a family wedding,” and Sally Rooney’s Mr Salary with its rolling under current of thwarted emotions. John Connell’s The Birds of June and Donal Ryan’s All We Shall Know deft feel for local dialect effortlessly transports the reader. And I have returned again and again to William Wall’s poignant The Mountain Road. Who says men are bad at writing complex female characters?

Ironically, the opening story, award-winning Kevin Barry’s The Raingod’s Green, Dark Passion a tale of return to “the city that made me”, proved a little underwhelming, in content and style so I was glad I hadn’t started at the beginning. Not bad, just a tad bland. Tóibín’s A Visit to the Zoo, set in Berlin, is the only story not actually set in Ireland or distinctly about Ireland. Like everything Tóibín does, it’s masterly.

The stories are illustrated with dark, brooding portraits of authors by Irish photographer Eammon Doyle, and there are expansive photoessays which editor Rausing said she had worried that they might be objectifying – “the rough youth; the sectarianism in the north; the beauty of the Travellers”. But concludes: “Ireland is Ireland”. There are also poems by Tara Bergin, Leontia Flynn and Stephen Sexton.

Granta 135 New Irish Writing is the latest of what is a highly successful and important imprint a volume of which is published four times a year, and it was a surprise to find that this is the first time the focus has been on Ireland. This collection takes the reader on a vibrant, swirling trip through what is one of the richest and most beautiful literary landscape.