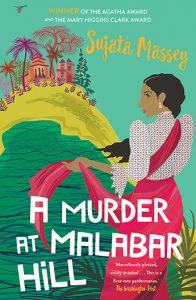 Whilst classified as a crime novel it’s a shame to pigeon-hole A Murder at Malabar Hill the latest offering by prize-winning author  Sujata Massey. Certainly there are several intriguing crimes, and villains aplenty, but like many of her previous cross-cultural novels, it offers much more. Its meticulous plotting, rich and complex characters and fine attention to historical detail make it a stand-out.

Set in Malabar Hill the most prestigious part of what is now Mumbai but, in the early decades of the 1920s in which the novel is set, was Bombay, Massey introduces Perveen Mistry, newly-returned from studying law at Oxford University, just two decades after the real-life Cornelia Sorabji of Poona, became the first woman to sit the British law exam. Although, as a woman, Perveen is unable to join the still male-only Bombay Bar, she is welcomed into her father’s legal firm Mistry Law, as the first female lawyer in Bombay.

When the firm is appointed to execute the will of a wealthy Muslim nawab and mill owner, being overseen by his officious manager Mukri, Perveen soon discovers that what was seemingly a straight-forward task of collating and checking the paperwork is not so.

Despite angry opposition from the domineering Mr Mukri, Perveen insists on talking to the mill owner’s three widows in zenana, the secluded part of the house where only women and young male children are allowed, and currently in official mourning. As Perveen explains the implications of the will, it is not long before she discovers that the women did not understand, nor agree with, Mr Mukri’s version of the will’s distribution of assets.

But when Mr Mukri is found murdered, Perveen realises that she may have misjudged the powerlessness of the three begums; an under-estimation that places their lives, and her own, in jeopardy.

Gradually unravelling through the narrative, is Perveen’s own complicated story of love in a male-dominated society and her friendship with the wonderfully awkward Alice, daughter of Sir David Hobson-Jones, the Governor’s special councillor, herself trying to trample on tradition’s straight-jacket.

A Murder at Malabar Hill (which was published in America as The Three Widows of Malabar Hill) is not just a classy who dunnit it, but a fascinating glimpse of the jarring inequality of a cross-cultural society on the cusp of what to some is agonisingly slow social change, and to others a terrifying loss of a way of life.

Sujata Massey was born in England to parents from India and Germany and raised mostly in America. She has published the Rei series of novels, set in Japan, and has won, or been finalists in, numerous awards. A Murder at Malabar Hill by Sujata Massey is published by Allen & Unwin. The Perveen Mistry follow-up, The Satapur Moonstone, is due out in April.