It’s been a while since there has been such an explosion of commentary about a book. Particularly before its release. All weekend the twittersphere has been running hot about Harper Lee’s Go Set A Watchman which is officially released on Thursday. Rarely have 140 characters been so breathlessly targeted.

To Kill A Mockingbird is probably my favourite books. Atticus Finch is

probably my favourite literary character. And even allowing for the trepidation that usually accompanies the sequel or prequel to any loved novel, particularly one that is part of the canon of American literature, my order was lodged with my local bookshop and I was looking forward to diving straight in. Not now though. For me, the deluge of commentary has had the opposite effect. Atticus Finch a racist!!!!!! screamed one tweet.

Not everything was so shrill. Despite the headline Atticus Finch a Klan-backing Bigot the article by Ashleigh Wilson places the revelations in the context of the current debate over race that followed the shootings at the Emanuel African Methodist Church in Charleston, South Carolina. And in his article Spotlight Kills the Mockingbird Ben MacIntyre provides some incisive thoughts on how the ferocious clamour of celebrity hounded Lee and would now fatally damage her legacy.  “Lee was never striking a pose. She was quietly standing up for an increasingly embattled minority who shrink from recognition. She said she had nothing more to say after Mockingbird, but now it seems, with the limelight turned up full beam, she has. The world has gained a new Harper Lee novel, but in the process it has also lost something.”

Tanya Gold’s excellent article at the weekend did a good job of trying to piece together why, after 55 years’ literary silence, Harper Lee decided to publish what is usually referred to as a sequel but is, in reality, the book she wrote first but which was turned down by publishers.

Ironically, those articles and the others that presented a more balanced viewpoint, worked with the tweets to harden my resolve. Perhaps it is naive of me but I really don’t want my memories of a book I have loved tarnished. I want to continue to view it as an entity in itself, not through the prism of another abandoned work which Lee herself had been contented to leave lie. I may change my mind, particularly after reading a considered review by someone whose opinion I like, and trust. But I don’t think I will be reading Go Set A Watchman. 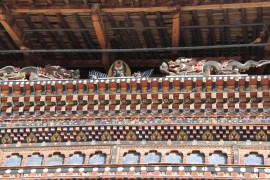 Pic of the Day: Tashichho Dzong, Thimphu, Bhutan
Joanna Rakoff gets a lesson in living from her year with Salinger
Navigate
Follow